The visual centerpiece and namesake of Brookville Park in the Rosedale neighborhood of Queens is the stream flowing through the park. It widens into two ponds before flowing out into the marshes of Idlewild. The larger one is Conselyea’s Pond, which has a long history going back to the American Revolution.

The pond’s namesake is the Conselyea family, descendants of Dutch settlers who owned a gristmill at this pond in the 19th century. The ponds of Brookville Park are part of the much longer Simonson Creek that originates in Elmont, follows the eastern border of Queens, and discharges into Jamaica Bay.

As this 1907 Belcher-Hyde atlas shows, the streams of southeast Queens all flowed from north to south. The straight line running along the lower third of the map is today’s Conduit Avenue, the service road to Belt Parkway. At the tip of the arrow indicating Simonson Creek is Conselyea’s Pond. Further upstream at Merrick Boulevard are Twin Ponds. At the time, Rosedale was a recent name given to Foster’s Meadows, an expanse of marshland where salt hay was harvested to feed cows on the farms of Long Island.

Having shared beautifully rendered maps of NYS Parks, created by the agency’s GIS Bureau, I should note that NYC Parks has its own GIS team with maps that reflect the terrain of parks. ON the above map of Brookville Park we see Simonson Creek going underground at the curve where Laurelton Parkway becomes Belt Parkway. It widens into the park’s unnamed smaller pond.

The two diamond markers indicate the park’s two boathouses, which were demolished in the early 1990s. Conselyea’s Pond is the larger pond in the park. Highlighted are the three north-south roads in Rosedale, Brookville Boulevard, Francis Lewis Boulevard, and Hook Creek Boulevard.

In a manner resembling Central Park and Prospect Park, the neighborhood has a 90-acre Olmstedian-style park, but no other parks in Rosedale, except for Sunrise Playground. Such a design is good for someone living across the street from the park, but not for some living 10 blocks away. In recent years the city has been sprinkling playgrounds and new parks more evenly across the landscape.

A 1940 aerial survey of Laurelton Parkway from the Municipal Archives shows the northern tip of Brookville Park. The Montauk Branch of the Long Island Railroad, Belt/Laurelton Parkway, and Sunrise Highway all cross the creek here. Foster’s Meadow Road was by then renamed Brookville Boulevard, paralleling the creek from the county line to its mouth. The firehouse and small pond boathouse are visible here.

I could not find information on when this boathouse was demolished. No trace of it remains, aside from the embankment and railing that used to be the dock. The pond is heavily overgrown with vegetation, hardly visible unless one stands close to its shore. 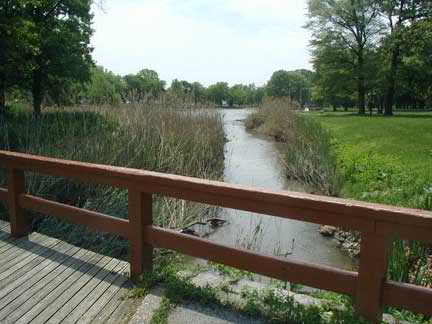 On the Parks GIS map above, we see Huxley and Edgewood Avenues running through the street grid. They follow the path of the Cedarhurst Cutoff, a briefly-used rail line that operated from 1918 and 1928. Providing a direct route between Laurelton and Cedarhurst, it shaved off a few minutes of time on the LIRR Far Rockaway Branch by skipping Woodmere, Hewlett, Gibson, and Valley Stream. Shortly after its abandonment, the right-of-way was developed and a footbridge across the creek was built on the site of the trestle.

Another long-gone structure in Brookville Park is the Forest Stream Pumping Station that was used by Brooklyn Water Works to bring the water of Conselyea’s Pond to Brooklyn via the aqueduct running along Conduit Avenue. The building stood north of the park’s present-day tennis courts.

From the Feb. 12, 1887 edition of Scientific American, we see a drawing of the newly-built pumping station. The article notes that the pumping station provided five million gallons of water daily for the city of Brooklyn, but the actual daily volume often exceeded this number. Forest Stream is one of the alternative names for Simonson’s Creek.

On the 1945 E. Belcher-Hyde atlas of Queens, the northern park of the park shows the upper pond’s boathouse. Brookville Boulevard’s old name, Foster’s Meadow Road appears in small letters. On the Rosedale side of Brookville Park, note how the pre-grid names of the streets also appear in small letters. Streets with numbers are good for navigating but those with names are better at expressing the individuality of the neighborhood.

The southern part shows the former rail tracks running diagonally through the park, past the pumping station. Conselyea’s Pond has its boathouse on its western side next to a curved embankment. On the western side of the park, homes have backyards bordering the park, in contrast to most city parks that have streets serving as borders on all sides.

Built as a millpond in the colonial period, Conselyea’s Pond has a naturalistic appearance except for the curvy shoreline promenade on its western side. In the park’s design this walkway was intended to serve as a dock for boats on the pond. Today there are only three lakes in New York City where one can rent a paddleboat: The Lake in Central Park, Meadow Lake, and Clove Lake. Looking to the past, the city also had boathouses at Harlem Meer and Bronx River. The former boathouses at Willowbrook Lake, Prospect Park, and Crotona Park are still standing but used as offices today.

The site of the Conselyea’s Pond boathouse is the raised concrete platform overlooking the pond. On my searches through the Parks Department archives, the Rosedale Library, and New York Times archives, I could not find the exact date of its demolition or photos of the boathouse. The source here would be the local civic groups and the archives of local weekly papers such as Queens Chronicle and Queens Tribune.

It was in the 1990s, at a time when many of the city’s parks were suffering from neglect resulting form deferred maintenance, crime, and homelessness. At the time, the city found it cheaper to demolish the boathouse and replace it with a new comfort station near the upper pond.

Conselyea’s Pond narrows back into Simonson’s Creek and exits Brookville Park at 147th Avenue, beyond which are the Idlewild marshes. In the colonial period, the Amberman Mill stood near this site, grinding wheat for local residents.

The mill was gone before the 20th century arrived. I found information on it at the Rosedale Library where librarian Louis Polovsky wrote a booklet titled History of Rosedale 1676-1776, part of a nationwide effort to promote local history in time for the nation’s bicentennial.

Polovsky provided a sketch of the mill. He writes that the immediate area was the scene of guerilla warfare between local loyalist and patriot militias, pitting neighbors against one another. According to Polovsky, Derrick Amberman was a Minuteman in the local militia. In 1777 he led a group that hid crops from the British troops and harassed them in targeted attacks. In April 1781, Maj. Richard Stockton of His Majesty’s New Jersey Volunteers launched a surprise raid on Amberman’s Mill.

The patriot was tied to a tree, whipped, and then fatally stabbed with a sword. The brutality of this summary execution brought Stockton to trial. He was acquitted and later fled to New Brunswick along with thousands of other local loyalists. There are no monuments or plaques in Amberman’s name in Brookville Park.

A Park with Friends

Every park needs friends to advocate for it. Friends of Brookville Park, organized in 2008 by Rosedale resident Kangela Moore has been instrumental in organizing public events in the park, such as cleanups, tree lighting, flower planting, and tours.

Simonson Creek is one of a handful that flow into Jamaica Bay at its Head of Bay on the Queens-Nassau border. Previously, I’ve written about Thurston Creek, Valley Stream, and Hook Creek which can be found nearby.