Although it is only 3.08 acres in size, a park in the Corona neighborhood of Queens has the distinction of being one of a few in the city that predates Central Park. Known officially since 2005 as Park of the Americas, it opened to the public in 1854 as Linden Park, sharing its name with a pond that lay in its center.

Where park goers once ice skated and admired the fish, today’s youths play ball in view of Public School 16. END_OF_DOCUMENT_TOKEN_TO_BE_REPLACED

New York is a city of islands but most of Queens’ border with neighboring Nassau County runs on land. On the southeastern extreme of mainland Queens is the neighborhood of Rosedale, which abuts the upscale Five Towns communities. Here, the border takes on water, running through Hook Creek.

The border crossing here is Hungry Harbor Road, a curiosity in name that’s a block away from the southern end of Francis Lewis Boulevard, the borough’s longest continuous street. END_OF_DOCUMENT_TOKEN_TO_BE_REPLACED

The spring of 2006, I spent a semester living in the capital city of New York state as an intern in the State Assembly. In my spare time, I explored this small but historic city for its alleys, ruins and other forgotten urban structures. It should come as no surprise that Albany has its share of hidden waterways concealed by nearly four centuries of development.

Washington Park Lake in the city’s center has a long serpentine shape. I had a feeling that it could be a remnant of a much longer stream that predates the city. END_OF_DOCUMENT_TOKEN_TO_BE_REPLACED

As late as 1936, steam locomotives shared tracks in the city with diesel and electric trains, horses shared the roads with trucks, and could that be a tall-masted ship docking on Staten Island’s North Shore? This week’s selected photo comes from the NYPL collection, taken by noted urban photographer Percy Loomis Sperr on May 22, 1936. 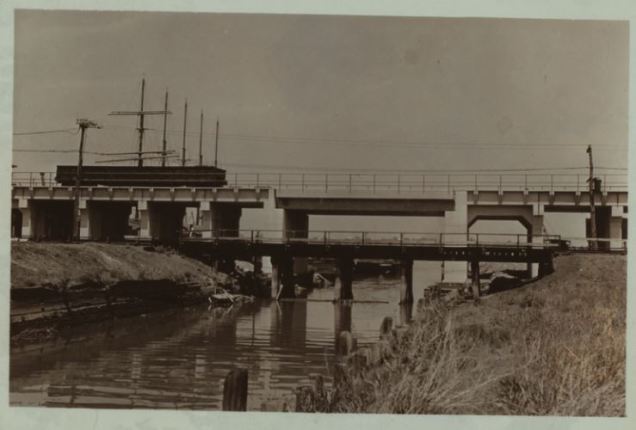 Sperr’s photo shows Bodine Creek crossed by the old and new trestles of the North Shore Branch of the Staten Island Railway.  END_OF_DOCUMENT_TOKEN_TO_BE_REPLACED

Is it an artificial pond or the largest fountain in the city? Why is there an abandoned bunker in the center of this waterway? A mystery to many visitors of Flushing Meadows-Corona Park, the Fountain of the Planets (FOTP) is a section of Flushing Creek that generated plenty of oohs and aahs in the two World’s Fairs that took place in this park.

The bunker in the center of this decommissioned fountain appears like an unused prop from Men In Black, but inside this structure were controls for what once was the city’s biggest fountain. END_OF_DOCUMENT_TOKEN_TO_BE_REPLACED

In the past two decades, the city’s newest parks and pedestrian plazas have taken on the role of outdoor museums with landscaping and artwork that tell the history of the sites. When it is no longer possible to daylight a hidden stream, markings on the pavement serve as reminders of the past.

On Broad Street in Manhattan’s Financial District, light blue paving recalls the Heere Gracht, a canal that ran down the middle of this street from 1646 to 1676.  END_OF_DOCUMENT_TOKEN_TO_BE_REPLACED

Each of New York City’s boroughs has its own Broadway. Likewise, Manhattan has a famous Canal Street, and there is also one in the South Bronx and another in Coney Island, Brooklyn. It’s no surprise then that Staten Island has a Canal Street of its own in the neighborhood of Stapleton.

It’s a street with plenty of history but nothing to suggest that a stream once flowed along its path. END_OF_DOCUMENT_TOKEN_TO_BE_REPLACED

Founded in 1790, the city of Washington was built on largely undeveloped land carved out of the state of Maryland as the nation’s capital district. Its main river is the Potomac, a mighty stream that forms the Virginia-Maryland boundary. The city’s second river is the Anacostia, which flows on the city’s eastern side. For hiking, there is also Rock Creek, which collects water from numerous tributaries in Maryland and within the city. Perhaps the most famous of Washington’s hidden streams is Tiber Creek, with its Roman name. 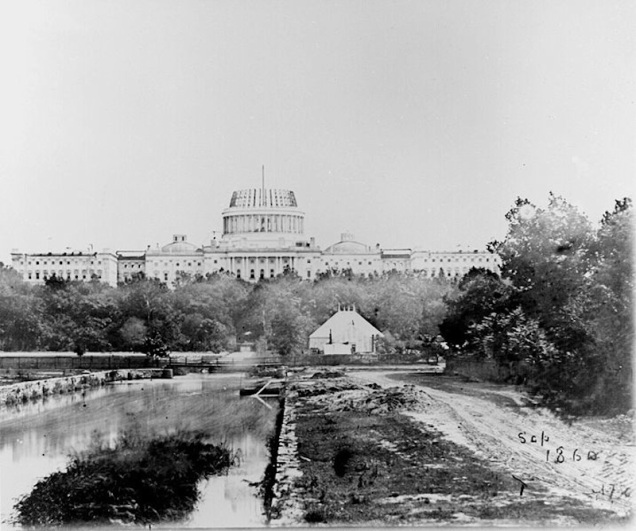 It passed by another Roman-inspired location: Capitol Hill, named by none other than Thomas Jefferson. END_OF_DOCUMENT_TOKEN_TO_BE_REPLACED

This week’s selected photo is a former reservoir located in Mount Prospect Park, Brooklyn. The photo comes from the Library of Congress’ extensive online collection.

Taken in the early 20th century by Detroit Publishing Company, it was used as a postcard image. Where the central library of the Brooklyn Public Library now stands used to be an iconic Romanesque revival water tower. The photo is looking west towards the New York Harbor and on the horizon is New Jersey. Unrivaled views were once available from this hilltop reservoir. END_OF_DOCUMENT_TOKEN_TO_BE_REPLACED

When it comes to stream restoration efforts in the New York metro region, Saw Mill River in Yonkers is the local celebrity. But inside an interchange in eastern Queens is a pond that was filled in the 1950s and restored in 2000. It lends its name to one of the largest parks in the city, a vast landscape of forests and wetlands that has its own nature center and adventure course.

In the second half of the 20th century, the view above was nothing more than a loop inside a cloverleaf interchange, later modified to allow for the reforestation of the surrounding slope and restoration of the pond. In the 21st century, if one ignores the highway noise, it has an appearance of an unspoiled landscape. END_OF_DOCUMENT_TOKEN_TO_BE_REPLACED