Throughout New England there are examples of urban streams that powered the industrial revolution and contributed to the development of cities. But as these streams flowed through their respective downtowns, they caused flood damage and with pollution, there were calls to have them confined to culverts and forced underground. In the state of Connecticut: Hartford has the Park River, Waterbury has its Mad River, and Meriden has Harbor Brook. Closer to New York is Danbury, where Still River has a similar history. 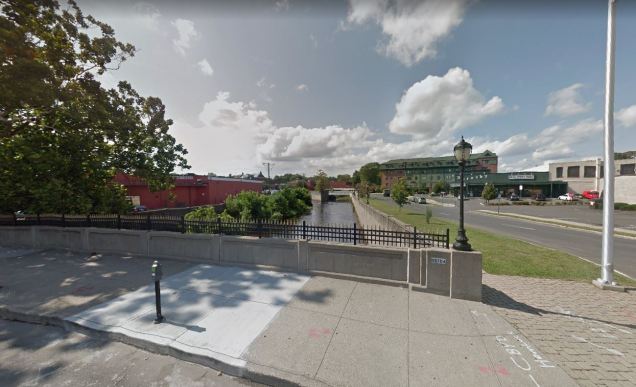 Once the hat making center of the country, the mills of Danbury are mostly silent and the shoreline in the city’s downtown appears as an afterthought, confined to a concrete channel as seen above at White Street.

END_OF_DOCUMENT_TOKEN_TO_BE_REPLACED

In a ravine on the edge of Queensborough Community College in Bayside is a natural lake whose history is closely tied to the neighboring campus. Oakland Lake received its water from a natural spring and a feeder stream that originated at 223rd Place and Long Island Expressway, flowing in a ravine that widened into the lake. An outflow stream took excess water from the lake east towards Alley Creek, which emptied into Little Neck Bay.

The frozen appearance of this pond in winter conceals its depth as a glacial kettle pond. The pond serves an aesthetic purpose as a park centerpiece and functional as a storm water outlet.

END_OF_DOCUMENT_TOKEN_TO_BE_REPLACED

One of the most important roads in southern Nassau County is Peninsula Boulevard, running in a southeast direction from Hempstead to the Five Towns. These are the upscale south shore suburbs of New York City where creeks can be found flowing behind backyards, beneath streets and in this case, on the median of Peninsula Boulevard.

In the community of Hewlett, the ditch that is the eastern branch of Motts Creek doubles as a route for power lines, demonstrating that as it is with highways, the easiest right-of-way for utilities is along waterways.