After my visit to the site of One Mile Pond, I felt it was a good opportunity to travel downstream and document the story of Baisley Pond, the largest lake in southern Queens. 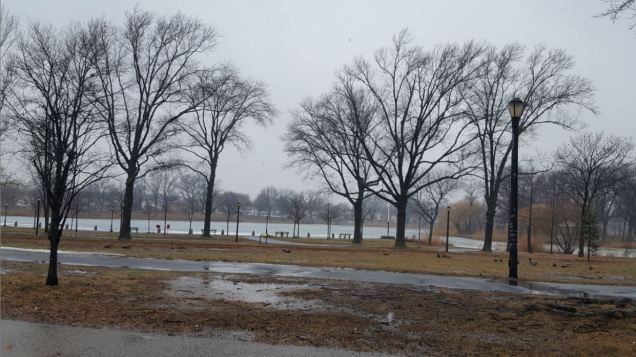 Having visited this park after a morning snowfall, the terrain was muddy and there were few people to be seen. It is a post-glacial landscape akin to when mastodons roamed the earth. In 1858, the remains of this creature were unearthed by the pond by construction workers who were transforming the pond into a reservoir.

END_OF_DOCUMENT_TOKEN_TO_BE_REPLACED

As you may know, much of my research for Hidden Waters of New York City does not involve paddling, swimming, or walking away from my desk. It involves having a grasp of GIS: geographic information systems where one compares maps of the same location to determine what lies beneath the surface. Even when the internet is down and there is no time to take the bus to the New York Public Library, I have an excellent resource down the hall from my desk at the Parks Department headquarters. 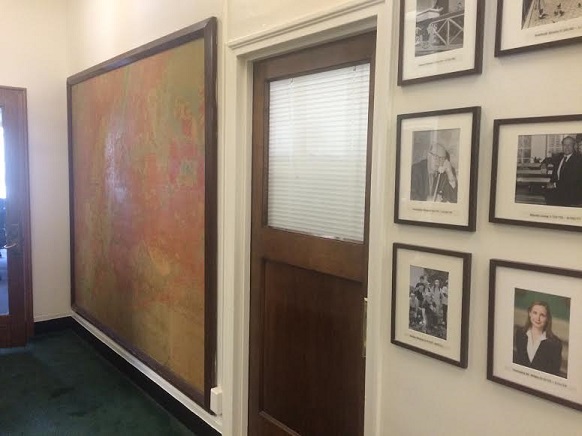 The topographical map above is undated. Taking a closer look at what’s there and what’s not there helps narrow down the approximate time of its publication and take stock of the changes on the city’s landscape since this map appeared. END_OF_DOCUMENT_TOKEN_TO_BE_REPLACED

Prior to development, a storm surge could inundate the entirety of Flushing Meadows, transforming the expansive salt marsh into an arm of the East River. In advance of the 1939-1940 New York World’s Fair, the marsh was filled in and transformed into a fairground. 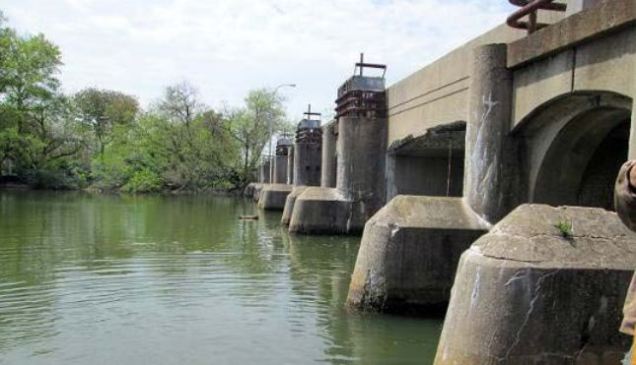 To keep out storm tides, a bridge was constructed across Flushing Creek in 1938, separating the saltwater section downstream from the tide-free freshwater section on the other side of the bridge. END_OF_DOCUMENT_TOKEN_TO_BE_REPLACED 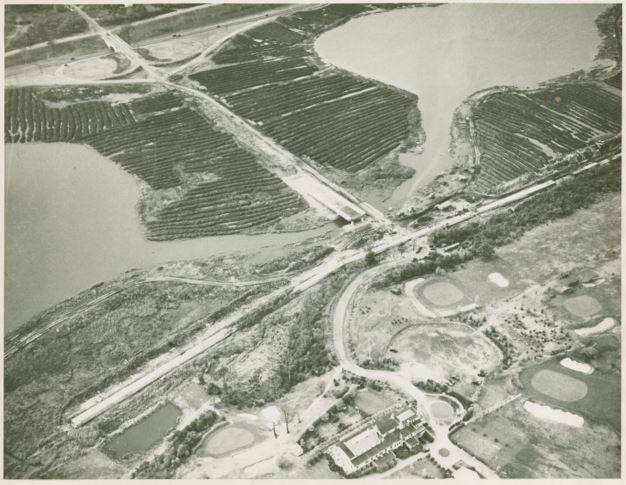 The shaping of Willow and Meadow lakes was a massive public works project that transformed more than a thousand acres of freshwater marshland into two lakes and creating a new transportation route across central Queens. The mansion at the bottom of the photo no longer stands but for four summers, it was the executive center of the city. END_OF_DOCUMENT_TOKEN_TO_BE_REPLACED

In 1874, a map like none other was unfurled before city planners by Col. Egbert Ludovicus Viele. Designed in a time when the city was rapidly expanding north thanks to advances in public transportation, Viele captured for posterity the locations of the island’s springs, brooks, creeks, and swamps, where land meets landfill, tracing former shorelines and hilltops. To this day, this map is used by structural engineers in Manhattan, who check it for buried streams when constructing buildings, tunnels and utility lines.

With 82 of the 101 hidden city streams in my book located outside of Manhattan, what map did I use to find these waterways? END_OF_DOCUMENT_TOKEN_TO_BE_REPLACED

At the southeast corner of Forest Park in the Queens neighborhood of Richmond Hill is Jackson Pond Playground. Bound on the south by Myrtle Avenue and on the north by the park’s pine grove, this playground serves as a reminder of a kettle pond that once occupied this site. 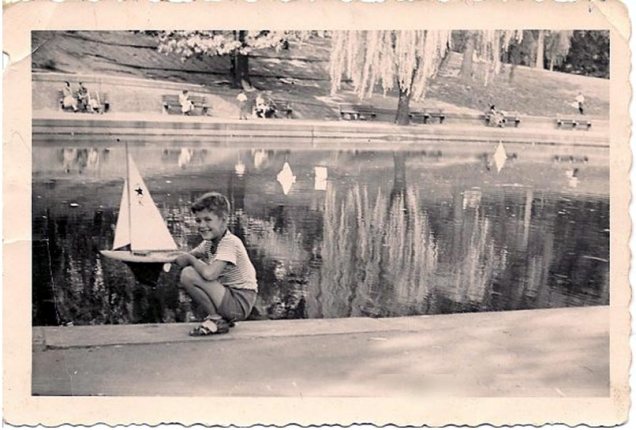 The pond was located in a natural depression, shaped like an oval, and used as an ice skating rink following the development of Richmond Hill in 1869. On the southern side of Myrtle Avenue facing the pond, the Forest Park Lodge served as the countryside home of Abram S. Hewitt. A former congressman and New York City mayor, he was described by one contemporary as “the most useful man in Washington.”

The City of Brooklyn, in its last major parks expansion prior to its merger with New York City, acquired Brooklyn Forest in 1895, laying its out as Forest Park. The former Hewitt home then served as the office of park superintendent Jarvis Jackson, whose name was given to the pond.

From 1922, the Parks Department issued repetitive proposals to fill in Jackson Pond, failing each time in the face of community opposition as residents feared losing their beloved ice skating spot. Yet changes did take place. In 1931, the pond’s muddy bottom was coevered with brownstone pebble gravel. In 1941, a concrete shoreline was installed in a design similar to Kissena Lake and Bowne Pond.

In 1966, the lake was dried and covered with concrete after the city determined it to be an unsafe ice-skating site. Basketball courts were installed on the oval-shaped outline of the lake. 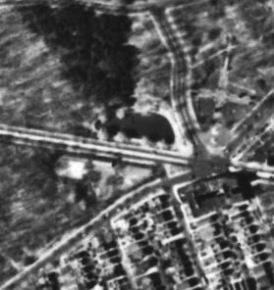 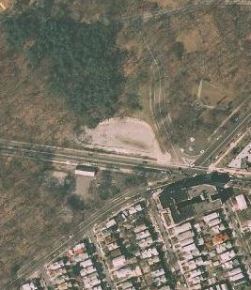 The playground was renovated in 2001 with two small fountains to commemorate the pond that was once there. 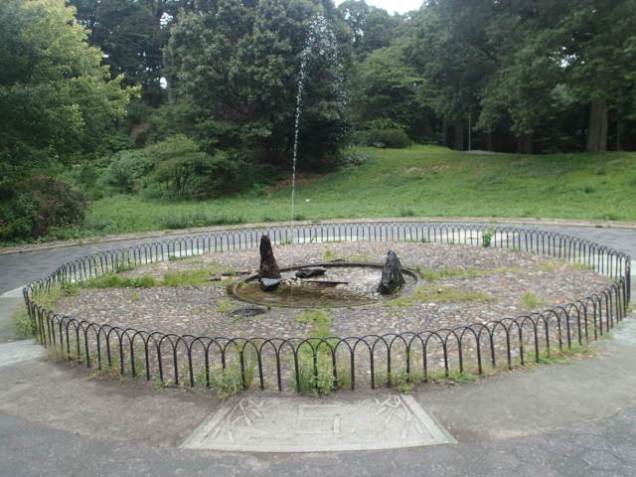 Jackson Pond Playground lies near the unusually-angled intersection of Park Lane South and Myrtle Avenue, by an entrance to Forest Park. 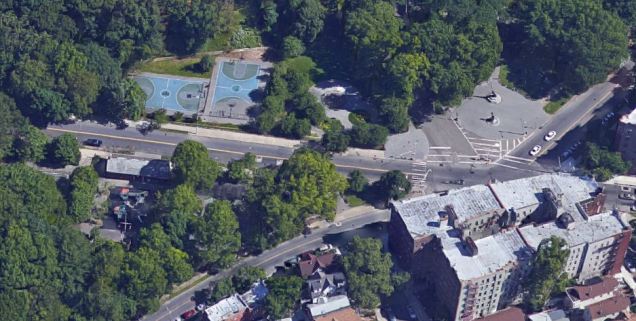 In the center of the plaza intersection, a bronze statue of a soldier looks to the south. Designed by Joseph Pollia, the First World War memorial was dedicated in 1926. Known as My Buddy, it depicts a serviceman pausing to look down at the grave of a fallen comrade. The statue stands on a pedestal designed by William Van Alen, the architect of the Chrysler Building. On the pedestal, a plaque lists the names of the 71 Richmond Hill residents killed in the war.

Across Myrtle Avenue from the pond site is Jayne Carlson Triangle, a playground named after a local community activist who served as Vice-President of the Richmond Hill Block Association and organized the annual Park Fair at this plaza. She died in 2000.