In a ravine on the edge of Queensborough Community College in Bayside is a natural lake whose history is closely tied to the neighboring campus. Oakland Lake received its water from a natural spring and a feeder stream that originated at 223rd Place and Long Island Expressway, flowing in a ravine that widened into the lake. An outflow stream took excess water from the lake east towards Alley Creek, which emptied into Little Neck Bay.

The frozen appearance of this pond in winter conceals its depth as a glacial kettle pond. The pond serves an aesthetic purpose as a park centerpiece and functional as a storm water outlet.

The oldest map that I’ve found of Oakland Lake is the 1852 Matthew Dripps map that shows Alley Pond on the east, with Oakland Lake as a tributary to Alley Creek. At the time land around this lake belonged to William Douglas, and some maps referred to this waterway as Douglas Pond. His last name can be found today on the map in Douglaston, an upscale neighborhood located a mile to the east of the lake. Northern Boulevard runs east-west on top of this map, and Black Stump Road (today’s 73rd Avenue) runs near the bottom. Most of Rocky Hill Road’s route is today Bell Boulevard, Luke Place, and Springfield Boulevard.

I keep finding more hidden city ponds long after publishing the book. On this map, we see Wild Cat Pond, used at the time by the Irish Peat Company to harvest peat. The pond site today is the Windsor Oaks co-op, attached residences with generous green space, a contemporary of Glen Oaks Village, Deepdale Gardens, and other similar eastern Queens co-ops. Kevin Walsh loves the 1852 map dissecting it into 8 essays so far that include Maspeth-Elmhurst, Woodside, College Point, Fresh Meadows, and southern Flushing.

Homes on the Lake

The namesake behind the lake’s current name was “The Oaks,” an estate on the lake’s southern shore owned by Frederick Newbold Lawrence. A veteran of the Civil War and a brief president of the New York Stock Exchange, he descended from a prominent colonial family whose cemetery is located a mile to the north at 216th Street and 42nd Avenue. In the 1923 photo above from the NYPL collection, we see a French Second Empire-style mansion with a curved mansard roof, and dormer windows on a rotunda tower. The home stood on present-day Horatio Parkway and 230th Street, east of the lake. Nothing of it remains today. 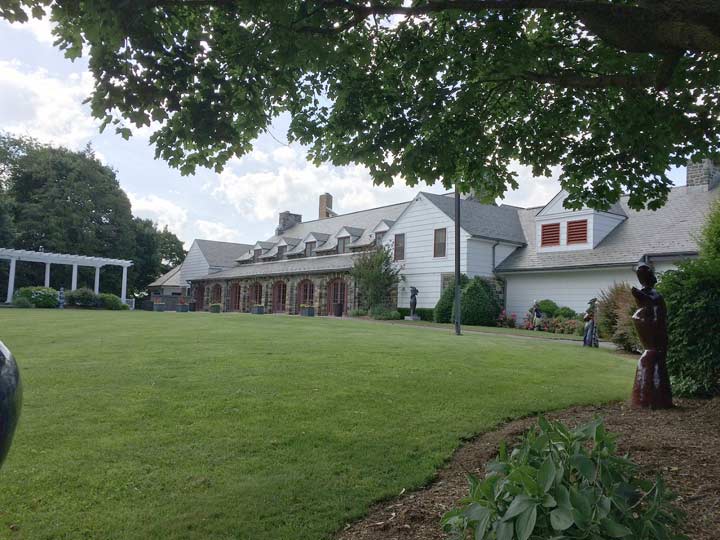 In 1896, the 180-acre Lawrence property was transformed into the Oakland Golf Club and its first game was hosted on April 10, 1897. Its clubhouse overlooking the lake was completed in 1923. Oakland Golf Club disbanded in 1952 and the course survived as a city-run public course for another nine years. Most of the property was developed into 600-units of tract housing, with 14 acres slated for Benjamin N. Cardozo High School and 35 acres for Queensborough Community College. The clubhouse functions as the college’s art gallery.

The ravine leading into the lake is seen above in Alison McKay’s book on Bayside, dated to 1950. The road here is 56th Avenue. Oakland Gardens Playground opened in 1964 on the hill to the left. The golf clubhouse today is hidden by trees planted in the past half century. The footbridge across the ravine was removed after the golf course closed.

Lake in the Park

In 1874 Oakland Lake provided water for residents of northeast Queens and had a pumping station on its eastern end. The facility was expanded in 1914, as seen in the above photo from Municipal Archives. It operated into the 1930s.

The lake was transferred to the Parks Department in 1934, which then “citified” the lake in a design resembling Bowne Pond and Kissena Lake. The shoreline was lined with concrete and the lake was cut off from its natural sources. Encroaching development around the lake contributed further to its deterioration. In the 1954 Municipal Archives photo above we see soil from its steep shorelines descending into the lake.

When erosion is not a concern, it is eutrophication, lack of oxygen, and invasive plant species. As with all city Parks waterways, Oakland Lake must be constantly monitored to maintain its naturalistic appearance. Efforts to restore Oakland Lake date back to the 1960s when Queensborough prof. John O. Reidl organized walking tours of Oakland Lake and Alley Pond Park, raising environmental consciousness among students, faculty, and local residents.

Although the brook that fed into Oakland Lake has been buried by residential development and the Cardozo High School football field, the Parks Department constructed a cascade that feeds city water into the pond at its western tip, simulating natural conditions. This design is akin to Montayne’s Rivulet in Central Park, which is a natural stream whose headwaters were filled and is now fed by the city’s water supply.

At the eastern tip of the lake, a weir channels the water underground. It flows for a short distance below Cloverdale Boulevard and Cross Island Parkway, seeing daylight on the grounds of the Alley Pond Environmental Center (APEC) where it flows into Alley Creek.

On the official Parks GIS map of the lake, we see the ravine preserved as parkland. The 46-acre lake and ravine are part of the larger 635.51-acre Alley Pond Park, which has its own system of waterways and wetlands, most notably its namesake pond. Cloverdale Boulevard separates Oakland Lake from the rest of the park. This incomplete boulevard runs in four segments between Northern Boulevard and Union Turnpike. Nearby Horatio Parkway is also undeserving of its name, as it runs for only four quiet blocks. Generally, the boulevard and parkway designations are reserved for major arteries.