Historically, it was easy to tell when you were entering or leaving a city. Its borders were indicated by walls and gates for centuries and in more recent times by generous greenbelts that separated one city from another. Between Belmont Park and the Laurelton neighborhood in eastern Queens, the Cross Island Parkway straddles the city line, separating the city from the suburbs of Nassau County.

At a point just south of Linden Boulevard, the parkway has a tight hairpin interchange with Southern State Parkway, and a hidden stream flows beneath the twisting “suicide” curve.

As often happened, when planners were charting paths for future highways, the easiest routes to map were along existing streams, where property acquisition was much easier to achieve. This week’s photo is from an aerial survey conducted on August 8, 1951. The photo comes from the New York State Archives.

END_OF_DOCUMENT_TOKEN_TO_BE_REPLACED

One of the most important east-west routes in Queens is Hillside Avenue, marked in parts as State Route 25 and 25B. The ancient road marks the terminal moraine of the last ice age. To its north are hills once dotted with kettle ponds. South of the terminal moraine, the landscape of Queens gently slopes towards the Atlantic Ocean. Streams originating near the moraine flowed south in a nearly straight direction towards Jamaica Bay. Dammed by farmers for use as mills, and by Brooklyn for its water supply, examples include Baisley Pond and Conselyea’s Pond.

One pond however is not connected to any stream, has no name (yet) and was formed in the late 1990s.

The pond is located within a sprawling 54-acre Roy Wilkins Southern Queens Park, a former naval hospital given to the city in 1977 and developed as the focal green space for southeast Queens. Upon the acquisition, most of the unused structures were razed and in their place the community had a blank slate on which to design what it hoped to see in a park. END_OF_DOCUMENT_TOKEN_TO_BE_REPLACED

Where the street grid covered numerous ponds across the city’s boroughs, the youngest of them, Staten Island still has plenty to offer. Along the island’s south shore, numerous ponds and creeks that were once erased by mapmakers in favor of yet-to-be-built streets have reemerged within the Staten Island Bluebelt. Launched in 1990 by the city’s Department of Environmental Protection, the program involves acquiring privately-owned wetlands and re-purposing them as storm water drainage corridors, essentially allowing nature to channel the excess water rather than having it travel through sewers.

These preserved ribbons of open space function not only as storm water channels but also as parks and nature preserves in a rapidly developing borough. Among the 19 designated Bluebelt properties on the South Shore is Jack’s Pond, an apparent throwback to an earlier time in the Great Kills neighborhood.  END_OF_DOCUMENT_TOKEN_TO_BE_REPLACED

In a city as starved for land as New York, there is Central Park with its 843 acres of grid-defying naturalistic landscape. Last night, I attended a lecture given by Gerard Koeppel, author of the recently published “City on a Grid: How New York Became New York.” He spoke of Central as the antithesis of Manhattan’s rectilinear grid, with its winding paths that respect the topography, 40 uniquely designed bridges, and artificial bodies of water that appear timeless. The largest of them is the Jacqueline Kennedy Onassis Reservoir, which takes up 106 acres in the midpoint of the park, ringed by a 1.58-mile running track.

“There’s a sense of space and solitude here unlike any other part of the park.” –Kevin Bacon. END_OF_DOCUMENT_TOKEN_TO_BE_REPLACED

Riga, Latvia, the city of my birth is an urban explorer’s dream. With more than 800 years of history, it has structures that represent the conquerors who ruled this city: the Teutonic Knights, the Poles, Swedes, Russians, Nazis, Soviets, and the independent Latvian state. Although the borders of the city cover 117 square miles, the urban core is relatively small. Most of the city is comprised of suburbs, tight apartment complexes along the periphery and virgin pine forests. Numerous hidden waterways flow throughout the city, some of which I had explored in my brief childhood in Riga.

One of them was a ditch that flowed near my father’s garden plot near Jaunmoku Iela in the Pleskodale neighborhood. END_OF_DOCUMENT_TOKEN_TO_BE_REPLACED

The shaping of Willow and Meadow lakes was a massive public works project that transformed more than a thousand acres of freshwater marshland into two lakes and creating a new transportation route across central Queens. The mansion at the bottom of the photo no longer stands but for four summers, it was the executive center of the city. END_OF_DOCUMENT_TOKEN_TO_BE_REPLACED

In the extreme southwest corner of Brooklyn, Fort Hamilton guards The Narrows, a strait that connects Upper New York Bay with Lower New York Bay and the Atlantic Ocean. The city’s last active military base, Fort Hamilton abuts the Bay Ridge neighborhood. The area is filled with historic alleys and old buildings. It is the birthplace of Kevin Walsh, author of Forgotten New York. The neighborhood’s trove of secrets includes a hidden body of water.

If you’ve never seen this pond before, I don’t blame you. It’s hidden behind a 20-foot concrete wall and I cannot divulge the source of this photograph. END_OF_DOCUMENT_TOKEN_TO_BE_REPLACED

If there is a hidden stream in New York City that resonates the most in my life, it is Horse Brook, whose course runs directly below my mother’s house. No trace of this stream remains today as it was gradually covered in phases. On the map, the only hints of this stream are superblocks that defy the surrounding street grid. These blocks avoided development until technology enabled construction atop the high water table marking the former streambed.

The last entirely undeveloped superblock on the stream’s path is the Newtown High School athletic field. Recently, this site was proposed for a pre-kindergarten. In response, Newtown High School alum Libely Rivas Tejada started a petition to preserve the open space. So far, 570 individuals have signed on. END_OF_DOCUMENT_TOKEN_TO_BE_REPLACED

While exploring the campus of Saint John’s University in the Hillcrest neighborhood of Queens, I supplemented my research with old aerial surveys and maps of the site. At the southeastern corner of the campus was once a pond that is entirely covered by a highway. Happy thoughts of a pastoral ice skating site are tempered by headlines of drowning victims at Redder’s Pond. 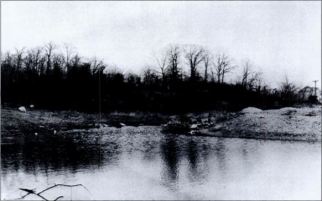 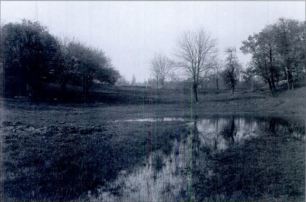 What happened to this pond and does anyone besides me care that it existed? END_OF_DOCUMENT_TOKEN_TO_BE_REPLACED

To mark Martin Luther King Day, there are four streams in Manhattan that relate to black history in New York City. Chronologically, they cover more than three centuries from the arrival of the first Angolan and Congolese slaves in New Amsterdam in 1626, to the civil rights period in Harlem.

On the subject of black history and rivers, perhaps no poem is as evocative of the connection as Langston Hughes‘ “The Negro Speaks of Rivers.” The composition speaks of how some of the world’s major streams have enriched the soul of the African American.

Hughes wrote that the poem came to his mind around 1920 when he was on a boat heading down the Mississippi. END_OF_DOCUMENT_TOKEN_TO_BE_REPLACED