Founded in 1790, the city of Washington was built on largely undeveloped land carved out of the state of Maryland as the nation’s capital district. Its main river is the Potomac, a mighty stream that forms the Virginia-Maryland boundary. The city’s second river is the Anacostia, which flows on the city’s eastern side. For hiking, there is also Rock Creek, which collects water from numerous tributaries in Maryland and within the city. Perhaps the most famous of Washington’s hidden streams is Tiber Creek, with its Roman name.

It passed by another Roman-inspired location: Capitol Hill, named by none other than Thomas Jefferson.

Prior to the designation of Washington as the capital city of the United Stated, Tiber Creek was known as Goose Creek, flowing through the small farms and plantations of what was then a part of Prince George’s and Montgomery counties of Maryland. Although small in appearance, its watershed comprised nearly half of the district’s land.

Once the property owners were compensated for their land, the planners set about developing the district. Around this time, Goose Creek was renamed after the river in Rome while Jenkins Hill was renamed Capitol Hill.

Under Pierre Charles L’Enfant, a set of diagonally intersecting streets covered the city, which was predicted to extend as far as what became Florida Avenue. Adding practicality to L’Enfant’s diagonals, a rectilinear grid was superimposed inside it by Andrew Ellicott.

L’Enfant’s plan indicates Tiber Creek entering the city from the north but then hidden beneath its streets. It reemerges in the city’s center as the Washington City Canal, a marine route that would take vessels to the front steps of the Capitol. The canal flowed along the northern side of the National Mall on what is today Constitution Avenue.

In its early years, the creek and the canal were quite idyllic, a place to escape from the work of governing. In the Peter Waddell painting Tiber Creek: The Bathers, recreates an event from 1825 when President John Quincy Adams, a frequent swimmer in the creek discovered a leak in his boat. Together with servant Antoine Giusta and his son John, they swam to the southern shore to await rescue.

As late as 1861, when the A. Boschke topographical map of Washington was published, Tiber Creek still flowed down from north of the city through its developing grid towards the National Mall. On the map below, the blog Park View, D. C. colors the creek and it tributaries.

The Washington City Canal was completed in 1815, a time when the country was going through a canal craze that included work on canals connecting the Chesapeake and Ohio, Hudson and Delaware, Hudson and the Great Lakes, and the Hudson with Lake Champlain, among others.

The city’s canal was an eastern extension of the Chesapeake and Ohio Canal. At 17th Street and Constitution Avenue, the Lockkeeper’s House was completed in 1835. Its resident was charged with collecting tolls from travelers on the canal. 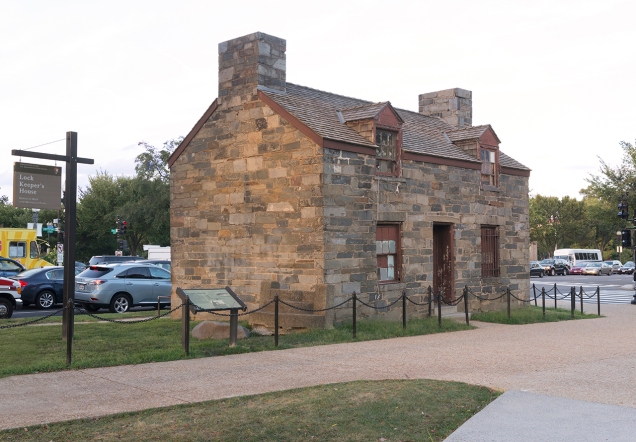 The oldest structure on the National Mall, it predates the park’s monuments and outlasted the canal. Where it once faced boat traffic, it is now passed by motorists. In the decade that the Lockkeeper’s House was built, the first railroads were laid out and would soon put the country’s canals out of business. Yet the canal persisted for another few decades. By the time of the Civil War, the canal had been out of service for more than a decade and a blemish on the city. In the 1863 photo below taken from the Capitol, one can see the Smithsonian Castle and towards the horizon, the Potomac River.

In a March 11, 1862 report to Congress, Commissioner of Public Buildings Benjamin B. French detailed the condition of the canal:

“The Washington canal, constructed at so great an expense,and which was at the time it was made regarded as one of the greatest possible improvements to the city of Washington, is now nothing more nor less than a public nuisance.  It is the grand receptacle of nearly all the filth of this city.  The waste from all the public buildings, the hotels, and very many private residences is drained into it … Unless something be done to clear away this immense mass of fetid and corrupt matter, the good citizens of Washington must during some hot seasons, find themselves visited by a pestilence!…”

Locks installed on the canal were designed to keep the high tide of the Potomac from penetrating further inland. Between the 1870s and the end of the 19th century, the canal had been entirely filled.

According to reports, the sewer that carries the former creek turned canal is wide enough for a bus to use. Local NBC affiliate reporter Mark Segraves has been inside the sewer back in June 2013.

Along with the Lockkeeper’s House, another remnant of the creek was unearthed in 1957 during the construction of the Rayburn House Office Building. 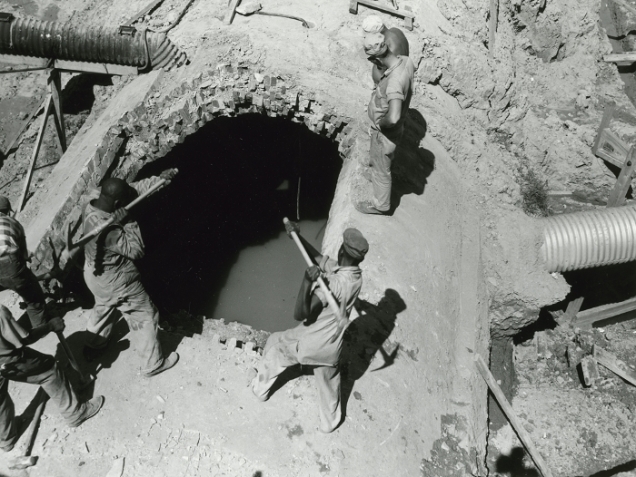 Such incidents can be found across the decades as construction projects and flooding in basements along the creek’s path serve as reminders of this phantom stream. As many urban streams have their daylighting advocates, Tiber Creek has local architect Karolina Kawiaka, who proposes a linear stream along Constitution Avenue between 4th Street NW and Constitution Gardens.

Streams on the Course

Although Constitution Gardens Pond and the Reflecting Pool of the National Mall are not connected to the Tiber Creek Sewer, their location along the stream’s former path merits their mention. Constitution Gardens, despite its Olmstedian appearance is a relatively recent addition to the National Mall. Originally an inlet of the Potomac River that was filled and developed in the early 20th century as the Main Navy and Munitions Buildings. 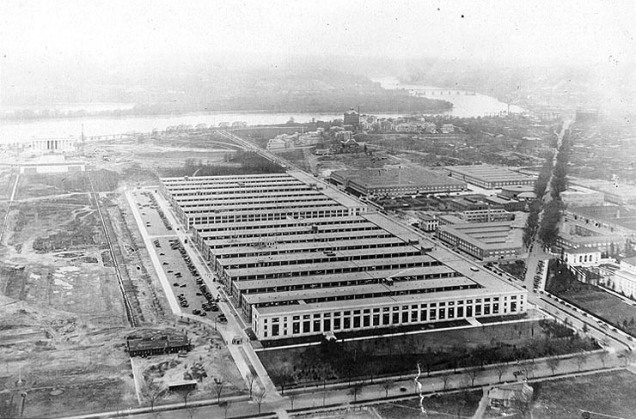 Never a hit with architecture critics, historians or the country’s leaders, they were regarded as an unwelcome intrusion on L’Enfant’s design, a scar on the National Mall. The buildings stood until 1970, when the Nixon administration ordered their demolition. With the nation’s bicentennial in mind, the site of these buildings was transformed into the 50-acre Constitution Gardens in 1976. In the center of this park is a pond with an isle that memorializes the 56 signers of the Declaration of Independence.

Nearly four decades since its opening, a competition was conducted to redesign the park. The winning proposal by Rogers Partners Architects + Urban Designers preserves the pond and includes constructed hills along the park’s edge as buffers from the city’s noise.

Beyond Constitution Garden, the National Mall and Memorial Parks spans the spectrum of the country’s history with numerous monuments and museums, a collection that keeps on growing but in a way that enhances rather than disrupts the vision of L’Enfant. When looking east from Lincoln Memorial or west from the Washington Monument, instead of seeing a linear park, one can imagine a stream. That’s where Tiber Creek flowed at the time that the capital city was built.

A Note on Hidden Waters: The Book

Yesterday’s book launch celebration at Greater Astoria Historical Society exceeded expectations with nearly 70 people attending. If you missed this opportunity to learn about the hidden streams of New York, the next presentation will be on Thursday, April 7, 6:30 pm at the NYPL Mid-Manhattan Library. I hope to see you then!

On a related note: