One such example is the Native Plant Garden at NYBG, which in 2013 received a postmodern-style pond. The unnamed brook here is the most visible hidden waterway at NYBG, and the question I’m researching is whether it is fed by springs, wells, or the city water supply.

As the official NYBG map is copyrighted by the Garden, I’ve made my own using Google Maps. On it we see the unnamed tributary brook originating in the Rock Garden, and then continuing through the Native Plant Garden, and past the Wild Wetland Trail and Children’s Adventure Garden. It goes underground beneath the Picnic Pavilions and Crabapple Collection, then reemerges to the surface within Thain Forest and descends down the forested slope into the Bronx River.

In winter the 2.5-acre Rock Garden is closed to visitors so I’m using a photo from the NYBG collection showing the waterfall at the source of the brook. On my visit to the garden’s library and archive, I could not determine the natural source of this brook. The proximity to its spring is the head of a valley. The Rock Garden was developed here in the 1930s to provide a mountainous setting for alpine flowers from six continents. A waterfall was constructed atop the specifically placed boulders, emptying into a small pond. The water for this cascade flows out of a pipe hidden among the rocks in a matter resembling the streams of Central Park, Prospect Park, and Morningside Park.

With access to the LuEsther T. Mertz Library, I searched for old maps and master plans of the garden. The most detailed report that I’ve found is the Cultural Landscape Report of 2005, authored by the firm Heritage Landscapes. On the page for Rock Garden, we see 14 distinct features of this area.

The brook’s relationship with the plants is seen in the mountain bog section of the exhibit. Prior to development this was likely a natural wetland with water flowing down the surrounding slopes to feed the brook. Overlooking the Rock Garden on its east is Thain Forest, a 50-acre virgin forest that inspired the location of the NYBG. The garden’s first director, Nathaniel Lord Britton described the woodland as “the most precious natural possession of the city of New York.” Like Parks designer Frederick Law Olmsted, he is a native of Staten Island, the borough with the most natural attractions in NYC.

After the Rock Garden, the brook enters the 3.5-acre Native Plant Garden, where storm water from surrounding paths drains into the constructed pond. In 2009, the Leon Levy Foundation donated $15 million to NYBG to redesign the Native Plant Garden, with architect Sheila Brady of the firm Oehlme, Van Sweden hired for the project.

At the center of this garden is a 230-foot-long water feature comprising of three connected ponds. Storm water captured on-site is filtered by aquatic plants in a miniature version of the city’s Bluebelt program. A promenade constructed of the native hardwood black locust runs along the length of this pond.

The Azalea Way separates the Native Plant Garden from the brook’s next downstream feature, the Mitsubishi Wild Wetland Trail. On the road we see a sewer grating above the covered section of the brook. Recall the Japanese automaker’s other philanthropic contribution on the Bronx River, the Mitsubishi Riverwalk at the Bronx Zoo, less than a mile downstream from here.

The wetland trail follows the brook as it widens into a freshwater marsh opposite the Children’s Adventure Garden. Along the path are dozens of explanatory signs describing the flora and fauna of this ecosystem. At the tip of this wetland, the brook disappears underground, flowing below the rolling terrain of the Crabapple Collection and the South Grove of the Azalea Garden.

Below a tree root among small rocks the brook bubbles out of the ground in a naturalistic manner. The appearance of the stream is similar to The Gill in Central Park and the brook flowing through Brooklyn Botanical Garden, both of which feature naturalistic “springs” that spit water from rocks concealing pipes.

With few historical maps of NYBG available online, I went to its archives in the garden’s library. If the Astor Court represents Bronx Zoo’s beaux arts centerpiece, the Mertz Library does the same for NYBG. From a European viewpoint, the building resembles a royal palace surrounded by official gardens but in reality both were publicly operated from the start. Although the U. S. never developed a landed aristocracy, in colonial times a sizable chunk of present-day Bronx was the estates of the Van Cortlandt and Morris families, who held their lands for multiple generations.

The library’s namesake, LuEsther T. Mertz cofounded Publishers Clearing House with her husband Harold. For many years it employed Forgotten-NY founder Kevin Walsh. I love the name LuEsther, it reminds me of LuAnn, LeAnn, and RoAnne. I’ve always wondered about the reasons for these prefixes. 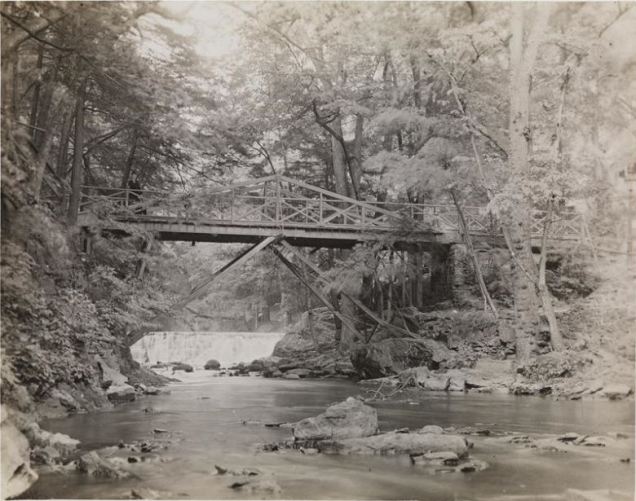 I cannot overstate the amount of detail contained in the Cultural Landscape Report of 2005. The report notes that between 1792 and 1870 the NYBG site was the property of the Lorillard family that made its wealth in tobacco manufacturing. Their former snuff mill is a city landmark, used by NYBG for offices and as a catering facility. This report also solves the mystery of the wooden bridge across the Bronx River. Previously I believed that it was used for Boston Road, but looks like this 1892 photo is actually near the snuff mill.

In the 1895 survey of the NYBG property, we see a handful of tributaries feeding into the Bronx River. At number 4 is the unnamed brook originating at the Rock Garden while number 2 shows the brook that feeds into Twin Lakes.

Between numbers 8 and 9 is an unnamed pond that is on the site of today’s Reiss Field. Initially used for ice skating, it was severed from the NYBG in 1937 by the Bronx river Parkway and developed two years later as a baseball field. On top of this map is Mosholu Parkway, an Olmstedian creation built atop another long-forgotten hidden stream.

The 1923 plan for NYBG shows the institution’s borders going as far as Burke Avenue and Bronx Park East, but encroaching urbanization was on its way. The red dotted line is an early proposal for Bronx River Parkway to skirt the garden’s western border. In reality, I highlighted the eventual path of the parkway, which would run on the eastern side of the garden, slicing away much of its land in favor of the road and playgrounds along Bronx Park East. This plan is an update to the original 1896 plan for the NYBG. 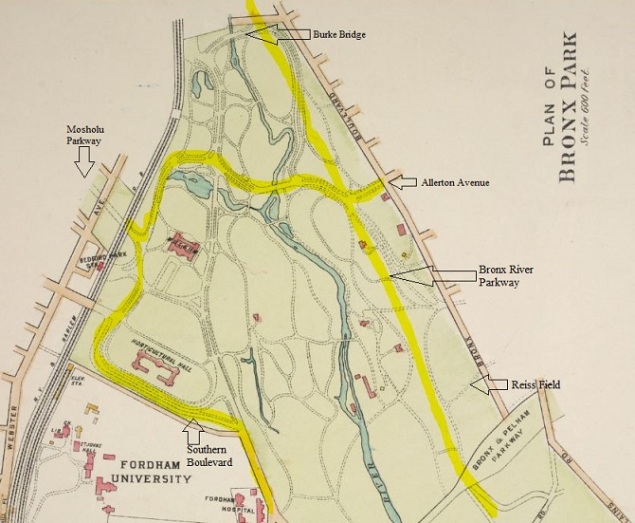 Borrowing a 1921 G. W. Bromley atlas from the NYPL Digital Collections, the highlighted modifications to NYGB are easier to see. Allerton Avenue will become the garden’s northern border in the 1930s, losing the fruticetum, bog garden, arboretum, and Burke Bridge. It’s hard to imagine that as sizable as the garden is today, it used to be much bigger a century ago. Land to the north of Allerton Avenue is public parkland today, designated as the Bronx River Forest, Allerton Ballfields, and French Charley’s Playground.

Within the Bronx River Forest is Burke Bridge, which lines up on the map with Burke Avenue. This bridge used to be part of NYBG’s network of internal roads, which explains for its width.

Today it is part of the Bronx River Greenway, a series of connected paths that follow the river from the city line to its mouth.

Another hidden waterway at the NYBG is Twin Lakes, as seen in the above Google Maps aerial. On the map their location resembles that of Cope Lake at Bronx Zoo, which is also near a northern border, next to a staff-only facility, and formerly open to the public. The roundabout in the middle used to be part of NYBG and its used to day as a turnaround for vehicles bound for Allerton Avenue. The restricted facility here is the Pfizer Laboratory, completed in 2006 by the firm Ennead Architects to a tune of $23 million.

The lab comfortably lies astride the southern side of the larger pond, with expansive views of this hidden waterway. Each pond contains a fountain for water circulation, and is a designated DEP Bluebelt wetland, the first one in the Bronx. The road dividing the twin ponds used to run north to Burke Bridge but became a dead-end in the 1930s after the Bronx River Forest was taken away from NYBG. This bridge today serves as a staff parking lot. 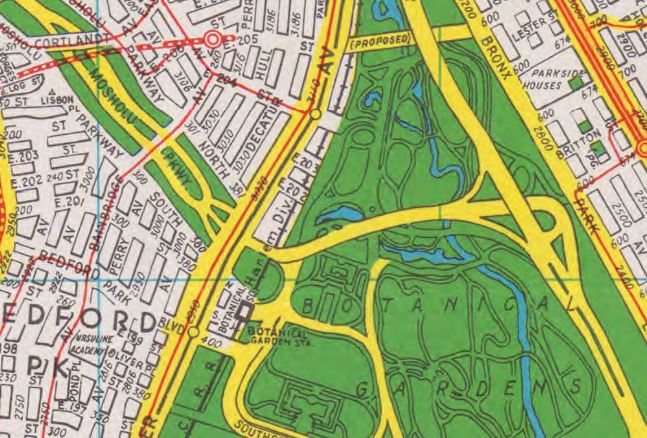 But it could have been worse for Twin Lakes. As part of Robert Moses’ ambitious highway agenda, the lakes were also alienated from NYBG in order to build a 1.2-mile connection of Mosholu Parkway and Bronx River Parkway.

On the 1959 Hagstrom map, the highway would have ran atop the smaller twin lake, with a partial trumpet interchange for Southern Boulevard further compromising the garden.

Civic opposition mounted against Moses, who had already reduced NYBG’s footprint with the Bronx River Parkway, and had earlier ran highways through Van Cortlandt and Pelham Bay parks. The highlighted extension was never completed. Twin Lakes were returned to the NYBG and vehicles traveling between the Mosholu and Bronx River Parkways must use the one-lane Allerton Avenue connection. Plenty of traffic backups here, but the egret, turtle, and frog habitat was saved.

As mentioned, Twin Lakes used to be a public area. In this 1912 archival photo we see visitors ice skating on the pond, in view of the garden’s palatial library. Winters in New York are not as cold as they used to be and as is the case with the city’s park ponds, the water here does not stay frozen for too long in winter. Much thanks to Samantha the librarian at NYBG for providing me with the maps and reports.

A Personal Note: In recent years I’ve had a strong sense of nostalgia for my art high school friends, many of whom I haven’t seen in years. In some of my recent photo essays, I’ve retraced steps where we used to walk. For Jonathan, I explored the Lower East Side; and for Karen, it was Soundview. For Manuel, near his childhood home is Butternut Street. For Romina, it was the panoramic views of Jerome Park Reservoir that she enjoyed form her Bronx home. Charlotte, be patient. I will get to you.

My connection to NYBG is Dante Burgos, a talented comic artist who also tends to the plants here. The man was like my unexpected Latino brother. I lived on Queens Boulevard. He lived on Grand Concourse. Both of our apartments were 1F. I’m not saying that our homes were identical, but the streetscapes were very much alike. For a time, I also sported a mustache and goatee. My wife won’t let me, but Dante still has his. And clearly we both love nature. He’s into plants and I like waterways.

If you liked this essay on the waterways of NYBG, check out my stories on the Queens Botanical Garden and Brooklyn Botanical Garden, which have their own hidden streams.