From its source at Kensico Reservoir south to the New York Botanical Garden, the Bronx River flows nearly in a straight line direction alongside the parkway that shares its name. But there is one section of the river where it takes a brief turn east before returning to its linear course. 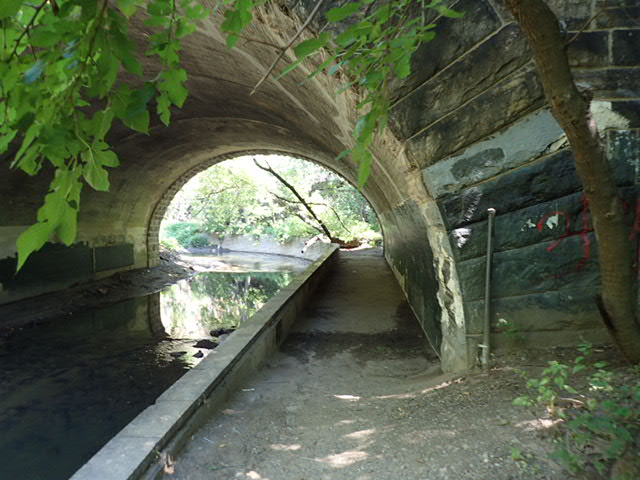 Here the river runs under six overpasses carrying Bronx River Parkway, Bronx Boulevard, and Gun Hill Road. There has been a bridge here since colonial times, lending its name to the Williamsbridge neighborhood.

END_OF_DOCUMENT_TOKEN_TO_BE_REPLACED 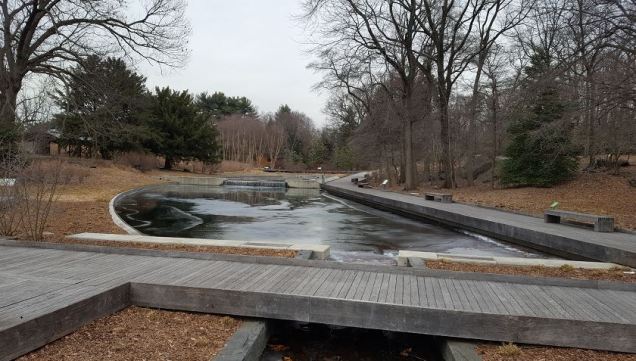 One such example is the Native Plant Garden at NYBG, which in 2013 received a postmodern-style pond. The unnamed brook here is the most visible hidden waterway at NYBG, and the question I’m researching is whether it is fed by springs, wells, or the city water supply. END_OF_DOCUMENT_TOKEN_TO_BE_REPLACED

Near the northern border of Woodlawn Cemetery in the Bronx is a natural lake that shares its name with the cemetery and the surrounding neighborhood. It is a pleasant feature in the park-like graveyard that contains the remains and monuments for some of New York’s most famous people. 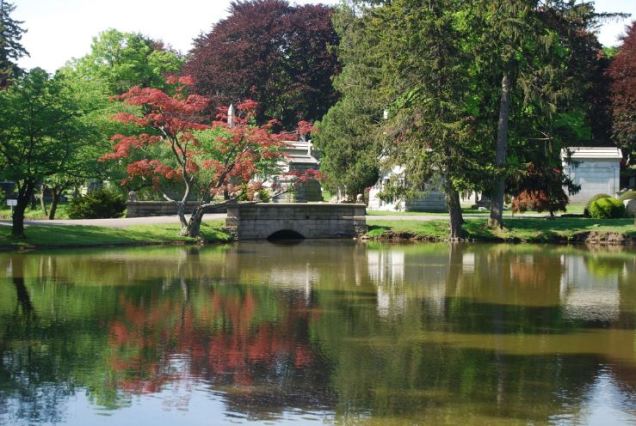 This water feature and the cemetery itself are contemporaries of Brooklyn’s Green-Wood and Evergreens cemeteries, which also have the appearances of a “burial park.” And like any distinguished park, they preserved their ponds while the surrounding landscape filled up with bodies and monuments.

END_OF_DOCUMENT_TOKEN_TO_BE_REPLACED

In its course within the Bronx Zoo, the Bronx River contains plenty of Hidden Waters materials such as a long-forgotten boathouse, a tributary stream, and a lake that flows into the river. At the Bronx River Gate to the zoo on Boston Road there is a walkway along its shore with a view of a waterfall that is open to the public free of charge. 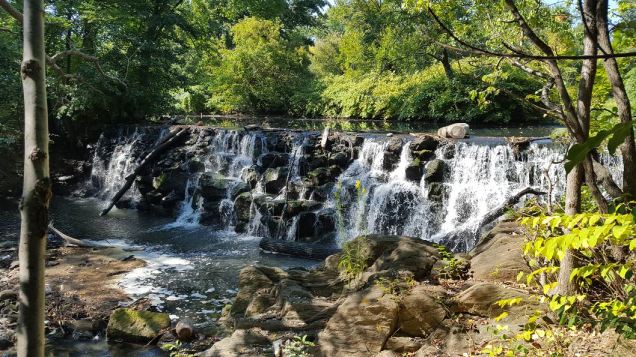 It is a scenic and quiet corner of the otherwise heavily visited zoo, its centerpiece being a 10-foot cascade that appears as a waterfall.

END_OF_DOCUMENT_TOKEN_TO_BE_REPLACED

When the Bronx Zoo was developed at the turn of the 20th century, its design was considered innovative as it preserved much of its natural terrain, giving many of the animals room to roam at a time when many zoos kept their exhibits in tight cages. The preservation of the landscape enabled the Bronx River to flow freely through the zoo, and retained some of the ponds and brooks within the zoo for the enjoyment of the animals. 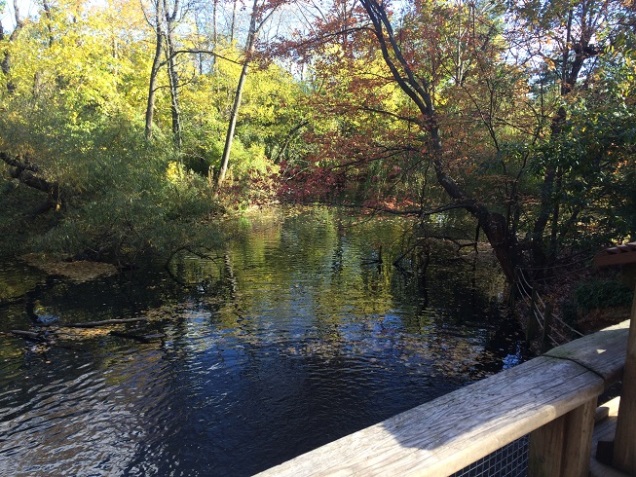 Among these waterways are the Northern Ponds and the brook that sends the water downstream from these ponds into the Bronx River.

END_OF_DOCUMENT_TOKEN_TO_BE_REPLACED

Among the recent parks completed on the tidal section of the Bronx River is one reminiscent of a Madonna song, new and at the same time with a history that includes a stint as an amusement park and a failed World’s Fair. Starlight Park occupies a narrow space between the Bronx River and Sheridan Expressway, with the 174th Street Bridge crossing over the park. 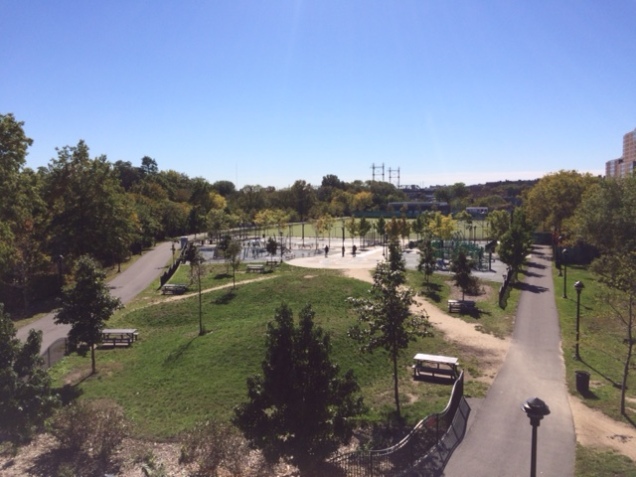 It is at once a calm space by the river that abuts two expressways in the densely populated center of the borough. END_OF_DOCUMENT_TOKEN_TO_BE_REPLACED

When the Bronx Zoo was developed at the turn of the 20th century, its design was considered innovative as it preserved much of its natural terrain, giving many of the animals room to roam at a time when many zoos kept their exhibits in tight cages. The preservation of the landscape enabled the Bronx River to flow freely through the zoo, and retained some of the ponds and brooks within the zoo for the enjoyment of the animals. 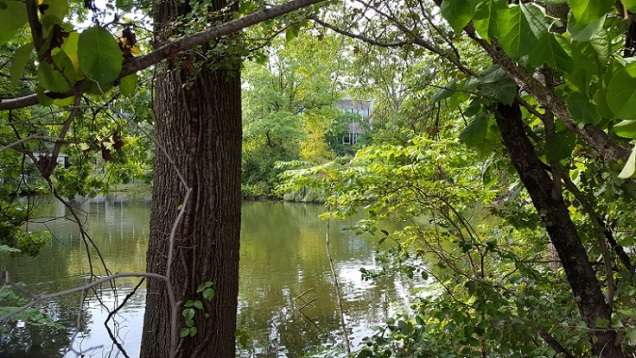 One such waterway is Cope Lake, located near the northern border of the zoo by Fordham Road. END_OF_DOCUMENT_TOKEN_TO_BE_REPLACED

I recently found a postcard that shows a boathouse on the Bronx River but had no idea where this boathouse stood. By its appearance, it is a counterpart to the boathouses of Central Park and Prospect Park but while those parks are also located at the centers of their respective boroughs, most of Bronx Park is not an open park. For more than a century, its land was set aside for the Bronx Zoo and the New York Botanical Garden. 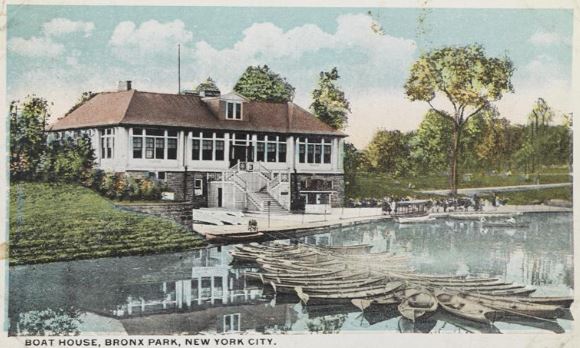 So if this boathouse was within the park, what happened to it and what’s there today? END_OF_DOCUMENT_TOKEN_TO_BE_REPLACED

As mentioned before, many of the city’s expressways and parkways were built atop or alongside waterways as their shorelines were usually undeveloped and less steep than the surrounding landscapes. The parkway is a New York institution, pioneered by Olmsted as a road lined with generous parkland on either side, shielding neighborhoods from traffic, creating green space for local residents, and a visually pleasant setting for travelers. 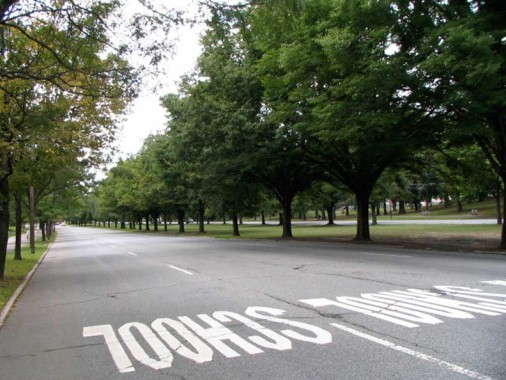 Mosholu Parkway‘s name is believed to originate from the Lenape term for “smooth stones” in reference to a stream. Did a brook ever flow on the path of this parkway? END_OF_DOCUMENT_TOKEN_TO_BE_REPLACED

On its course through the borough that shares its name, the Bronx river passes through a variety of landscapes ranging from the dense forests of Bronx Park, to the postindustrial shoreline along its tidal section. Between these two elements is the neighborhood of West Farms, where the stream flows through a tight series of rapids between the Bronx Zoo and Starlight Park. 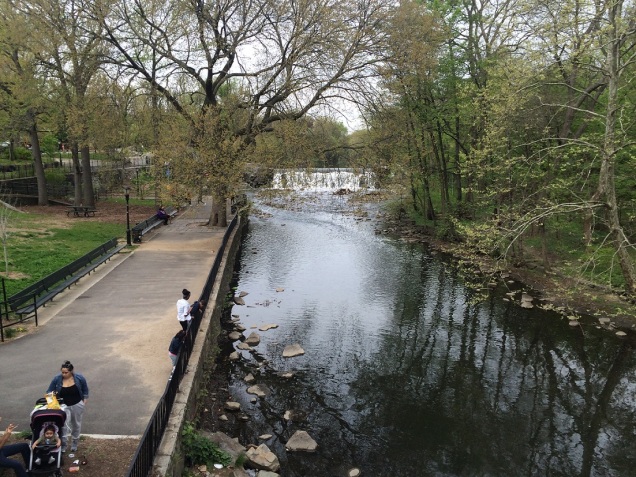 Here we have what appears to be a waterfall in the heart of the Bronx. The view is looking north from 180th Street. END_OF_DOCUMENT_TOKEN_TO_BE_REPLACED