When taking the Grand Street Bridge across Newtown Creek, one notices the avenue narrowing to two lanes as it uses a century-old swing drawbridge to cross Newtown Creek. Not known to travelers today is that this creek used to have two islands in it at its confluence with Maspeth Creek.

Nothing remains of the smaller Mussel Island, while the larger Furman Island has been fused to Queens. The former island is almost entirely industrial in use, with the exception of a small green piece of shoreline at a dead of 58th Road at 47th Street, where Maspeth Avenue once crossed over Newtown Creek.

Looking at the 1873 F. W. Beers map of Queens, we see Maspeth Creek flowing into Newtown Creek to the west of Maspeth and south of Laurel Hill. At this confluence is an island served by a freight rail spur and a smaller empty island next to it. Shanty Creek separates Furman Island from Queens. The island is connected to Brooklyn and Queens by Maspeth Avenue. A dotted line route to the south of the island is the planned Grand Avenue.

Although a distant memory, this island was the site of an early English settlement in the New Netherlands colony. Officially called Arnhem, after a city in the Netherlands, the site of the 1638 settlement was known to natives as Maspeth, from the Munsee term Mespaetches, or Bad Water Place. In 1642, the Maspeth natives massacred the settlers and the community was abandoned. The land titles to Arnhem were officially cancelled by the colonial authorities in 1661.

This native victory was temporary as the Englishmen returned a decade later to build the nearby community of Middleburgh, known informally as Newtown. As the town grew, the creek that led travelers to it became known as Newtown Creek.

As it was located in the creek that separated Queens and Kings counties, it was the subject of a border dispute between the towns of Bushwick and Newtown, mirroring the larger conflicts taking place between the Dutch and English colonies. On January 7, 1769 the colonial legislature delineated the border, placing the island in Newtown, Queens. A physical reminder of this decision is Arbitration Rock, a glacial boulder that marked the future Brooklyn-Queens border and can be found today in the yard of the Vander Ende-Onderdonk House, a colonial farmhouse located at 1820 Flushing Avenue in Ridgewood, less than a mile from this former island.

In its early years, the island also carried the names Smith and Mott, after its early landowners. Its final name was adopted in 1815, when Garrit Furman (1782-1848) purchased the 57-acre island. Along with the island’s name, Furman also took credit for reviving the name Maspeth on local maps nearly two centuries after the last local natives were expelled. Judge Furman built a mansion overlooking Newtown Creek and entertained local leaders with excerpts from The Maspeth Poems, which he composed. One such poem predicted the environmental decay to come, titled “Petition of a Shell-Fish, on Maspeth Island, for Protection Against the Turnpike-Makers.”

The poem was in jest, as Furman was a partner in the construction of the turnpike that became Maspeth Avenue. In 1855, industrialist Peter Cooper brought the first bone-processing plant to Newtown Creek, producing ink, soap, glue and gelatin. This was the same Peter Cooper whose company caused the degradation of Sunfish Pond on Manhattan’s East Side.

The Furman estate gradually shrunk until the last parcel was sold in 1899. The arrival of oil refineries, tanneries, fertilizer and acid manufacturers further degraded an island once known as a countryside retreat. 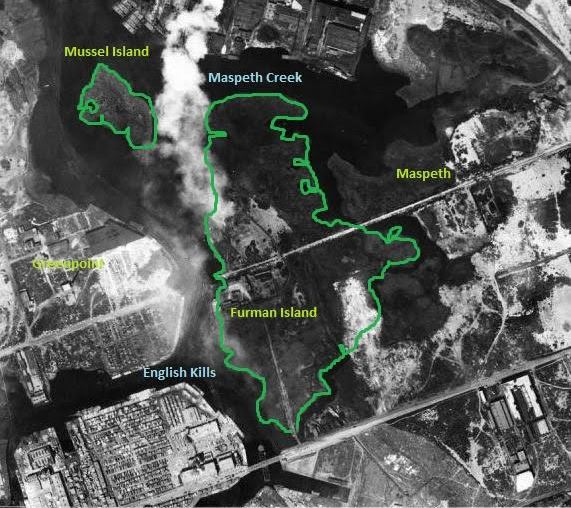 On the 1924 aerial survey above, Maspeth Avenue Bridge is gone, having fallen into disrepair in 1876 and replaced with the Grand Street Bridge to its south. Despite court rulings and public calls for its replacement, the Maspeth Avenue Bridge was never rebuilt. It may be humble but its designer Gustav Lindenthal also built the great Queensboro Bridge.

With industrial development, Newtown Creek took on a negative reputation and nearby Newtown was renamed Elmhurst in 1897. By the 1930s, Shanty Creek on the island’s east side was completely filled in. Its former stream bed approximates the route of 49th Place between Maspeth and Grand avenues. Above is a view of Newtown Creek from the Grand Street Bridge, with the former Furman Island on the right and Brooklyn on the left. Where the boat floats used to be Mussel Island.

What happened to Mussel Island?

Prior to industrialization, Newtown Creek hosted a sizable population of mussel on its bottom and at the confluence of Maspeth Creek and Newtown Creek was Mussel Island, an uninhabited patch of marshland that survived into the 1940s. As shipping increased on Newtown Creek, this island posed a navigation hazard, forcing boats to tightly swerve around it. In 1921, Congress approved a dredging project for Newtown Creek that proposed to eliminate Mussel Island in favor of a “turning basin” that would enable larger vessels to turn around. By the end of the following decade, the island disappeared beneath the water.

The Maspeth-based map company Hagstrom continued to mark the island on its maps until October 2000, when a reader asked the New York Times about this phantom island and Hagstrom conceded that it no longer belonged on the map. It is possible that this miniature Atlantis was used by Hagstrom cartographers as a tool to see if other map companies would copy Hagstrom’s maps, including its use of a nonexistent island.

In memory of Mussel Island, I created a page for it on Wikipedia.

As a city worker, I try to find workplaces that are pleasant. With budget limitations in mind, many city and state facilities are not in their best shape. The Grand Avenue Bus Depot that stands atop the former Furman Island truly stands out. Completed in 2006, it is regarded as the first “green” bus depot in the city for its environmental features.

A Farm on Furman Island?

The announcement earlier this month that Elmhurst Dairy, the last milk processor within New York City, will be closing its Queens operations leads to the question on what food manufacturers can still be found in a borough that once produced Chiclets, Ronzoni, Taystee Bakery, Fink’s Bread, and Wonder Bread. ← (each hyperlink here is a sad story of a factory closing) 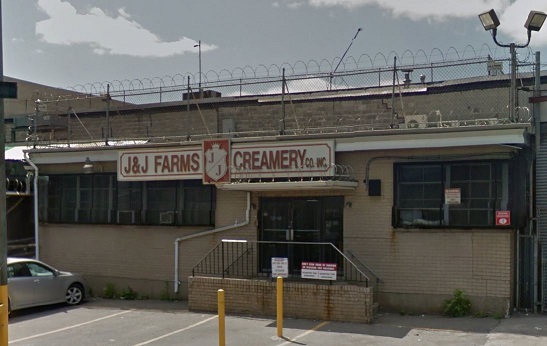 J & J Farms Creamery comes to mind, but alas this is not a factory, let alone a farm. It is a wholesale distribution facility from where trucks take the brand’s cream cheese, butter, and margarine products to supermarkets across the city.

When it comes to all things Newtown Creek, Mitch Waxman’s Newtown Pentacle blog is the go-to source for every corner along this hidden Brooklyn-Queens waterway. Learn more about Furman Island, Maspeth Creek, and Grand Street Bridge by visiting his blog or taking his tours.