This week’s selected photo is a 1939 Percy Loomis Sperr product from the NYPL Digital Collections. It is an inlet of Newtown creek awash in logs. Welcome to Whale Creek.

From the scene above, it may as well be the Pacific Northwest but the logs come from a region across the border from the country’s northeasternmost state.

In the 1880 G. W. Bromley map of Brooklyn’s Ward 17, which is today’s Greenpoint neighborhood, dotted lines indicate the natural course of Whale Creek. On older maps of the area, its headwaters appeared near the present-day intersection of Humboldt and Nassau streets. I highlighted Greenpoint Avenue and Kingsland Avenue for reference.

As the area industrialized, its wetlands were filled and its streams were straightened. According to the 1880 G.M. Hopkins atlas, the bulkhead line for Newtown Creek and Whale Creek was approved in 1857. 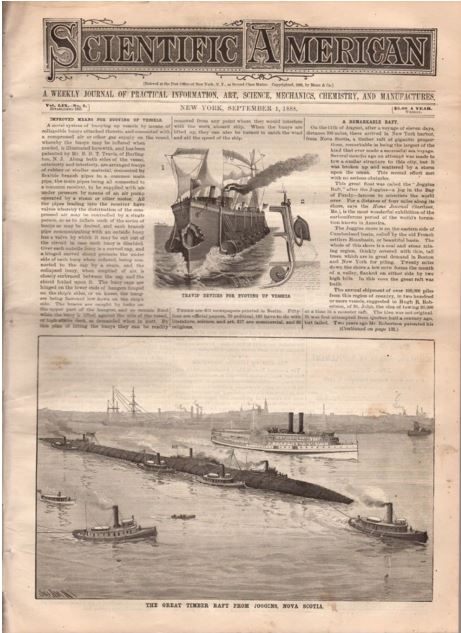 The most memorable event at Whale Creek took place on August 11, 1888, when this inlet welcomed the Joggins Raft, a cigar-shaped bundle of logs transported for 700 miles by sea using three tugboats from Joggins, Nova Scotia by contractor James D. Leary.

The record-setting seagoing float attracted crowds throughout its 11-day voyage. For more than fifty years before this date lumber transportation by raft had been tried both on the Pacific coast and in the East, but every attempt had ended in failure.

Leary himself had experienced two failures before the great raft was successfully launched and towed the long distance into New York harbor. The dimensions were 595 feet in length, with a girth for over 100 feet of 150 feet and a depth of 38 feet. The great mass of logs was bound together by iron chains and steel wire and was almost as compact and solid as though it were the trunk of some giant tree.

If you plan on visiting Joggins, it’s a very small town on the north shore of Nova Scotia best known these days for its UNESCO-designated Fossil Cliffs. 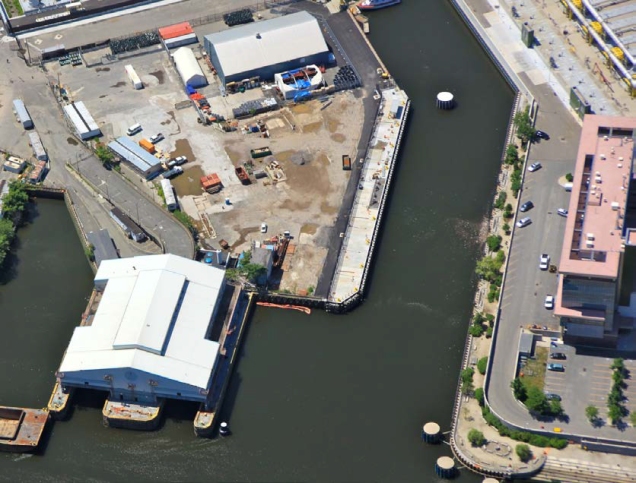 With the decline of the creek as a seaport, the shore lay unused until 1967, when the Newtown Creek Wastewater Treatment Plant began operating. The largest among the 14 city-operated water treatment plants, it has a visitor center, the architecturally significant Digester Eggs, and the nature walk along the western side of Whale Creek. Back in 2012, Kevin Walsh of Forgotten-NY visited Whale Creek’s Digester Eggs and Nature Walk as part of a story on a series of demapped streets that terminated at Newtown Creek.

It is difficult to imagine cetaceans appearing at Newtown creek or any of its tributary inlets, but prior to pollution, New York’s waterways hosted dolphins, seals, and sharks. As water quality continues to improve, these creatures have been reappearing in local waters to such an extent that there is now a whale watching tour operating off the coast of the Rockaways. In more polluted waterways, whales have also been spotted in recent years, such as the Gowanus Canal, where a minke whale died in 2007 and a dolphin was stranded in 2013. Let’s hope that if a whale is spotted in its eponymous creek, that it will survive the visit in good health.

To learn more: When it comes to Newtown Creek and neighborhoods along its shores, the expert whom I consider to be my foremost source is Mitch Waxman of the Newtown Pentacle.

In the news: Flagpole of Athens, Georgia reports on the efforts to daylight buried streams on the University of Georgia campus.

Away for spring: I will be taking a break next week from blogging. Keep checking for updates on upcoming speaking engagements and stories related to hidden urban streams in New York and beyond. I welcome your submissions on hidden urban waters, send me an email with a photo and I will write about it.

2 thoughts on “Photo of the Week”