The state of Utah was founded on very lofty ideas and the Mormon settlers who developed the state applied a few biblical names to the map: Jordan River, Zion, and Moab. The capital city however has a plain name, Salt Lake City and the stream that continued to the city’s growth also has a simple name: City Creek. 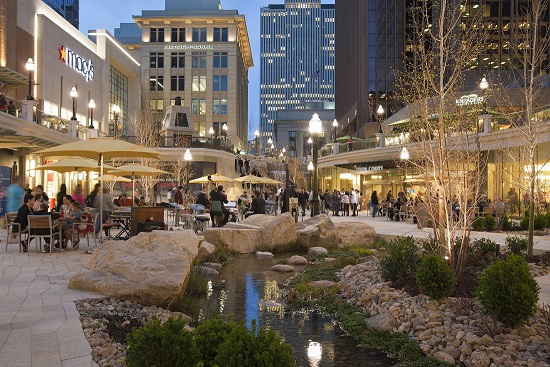 Today this hidden urban stream is associated with a shopping center in the city’s downtown, where a channel resembling the creek flows through the mall to the delight of shoppers.

The earliest map that I’ve found that shows City Creek flowing on its historic course is an 1870 Augustus Koch birds-eye view of Salt Lake City where the creek leaves its canyon and flows in a straight line westward along North Temple Street towards the Jordan River, passing by the world center of Mormon Christianity. Led by Brigham Young, the first Mormon settlers arrived in the Jordan valley in 1847, planning their Salt Lake Temple near the spot where City Creek entered the gently sloping plain. It was Young who gave this creek its name as he envisioned a city on what was then an empty plain.

A Source of Water 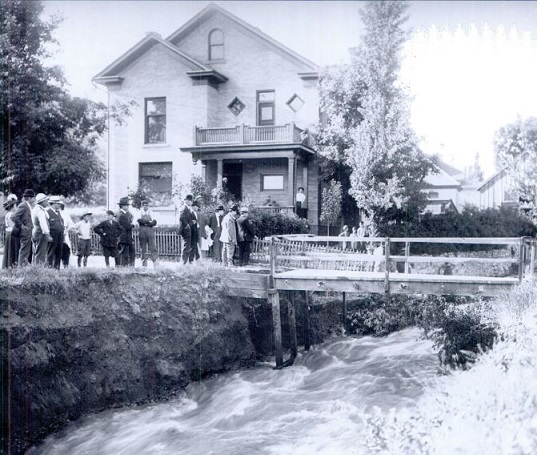 From Cevan Lesieur’s book on The Avenues, the city’s upscale uptown neighborhood, we have a photo of Fourth Street crossing City Creek with residents witnessing a particularly fierce runoff on June 2, 1909. Depending on then amount of snowmelt further up the creek, this creek can sometimes appear as a torrent, with its most recent flood disrupting the city in 1983. In the city’s first half century, it served as the source of water for its residents. It was also used for baptisms. Other local creeks used to supply water were the Red Butte, Emigration, Parley’s and Mill Creek, which also emerge from the Wasatch Mountains and flow westward.

Above is an image of City Creek looking west in the median of North Temple Street in 1875, courtesy of the LDS Church History Library.

The flood threat posed by City Creek, reduced reliance on its water and the city’s expansion resulted in its burial in 1909, with the section west of Memory Grove Park flowing through a culvert.

To prevent a repeat of the 1983 flood, where City Creek overflowed its sewer, most of its water enters the culvert at Memory Grove Park, where the City Creek Canyon ends and the plain begins. In 1995, a section of the creek between this park and State Street was restored as City Creek Park, where some of its water flows through a constructed stream bed. Within the park are historical markers, including one on the site of Charles Crismon’s gristmill, the first mill in Utah.

The influence of the Mormon church on the development of Salt Lake City cannot be overstated. It is among the few state capitals where the Capitol is on the city’s periphery while its Temple is in the center. As the U. S. Capitol forms the center of the Washington D. C. grid, the Joseph Smith design street layout of Salt Lake City radiates from the southwest corner of the Temple.

The Temple is surrounded by church-owned land that includes other global institutions pertaining to it: Salt Lake Tabernacle, the modernist Church Office Building, Joseph Smith Memorial Building, Church history Library, and its Conference Center. The latter is the most recent of these structures, completed in 2000. Its campus contains a reconstructed stream flowing along the sidewalk on North Temple Street, as a reminder of the historic City Creek.

This urban shopping center in the heart of Salt Lake City was also built on church-owned land and subject to criticism on the church’s role in promoting consumerism, to which the reply related to job creation and the revitalization of the city’s downtown. Completed in 2013, it stands on the site of two malls built in the 1970s. Utah’s first department store, ZCMI, also stood within the mall’s property and its historic façade has been preserved. Representing a new generation of shopping malls, City Creek Center is mixed use, with apartments and offices within its property, and access to public transportation. It was developed in partnership with mall developer Taubman Centers and designed by the SWA Group.

On the plan above, the mall’s two blocks are linked by a stream lined with native vegetation and populated by trout. As with restored Collect Pond in downtown Manhattan and the waterways of Central Park, the 1,200-foot stream winding through this shopping center is not connected to the actual City Creek. As with the examples of reconstructed inland waterways in Manhattan, the creek flowing through City Creek Center receives its water from Salt Lake City’s aqueduct, which is tapped from the same mountains as the real City Creek.

The prospect of daylighting the actual City Creek that runs beneath North Temple Street has been brought up since the 1980s, but the high cost of property acquisition, demolition, and disruption to infrastructure have kept this concept on the planners’ shelves.

Can a replicated creek flow through a shopping mall in New York City? Perhaps and looking at historical maps, the best candidate could be Queens Center Mall, which is situated on the stream bed of Horse Brook. Another could be Forest Avenue Shoppers Town on Staten Island, whose outdoor parking lot sits atop the buried Palmer’s Run.

A shopping center with natural history incorporated into its design, what an idea!

The title is very similar to that of my book, but I’ll let it go. The University of Utah library’s HiddenWater.org has the most detailed information on the hidden streams (including its canals) of Salt Lake City, including historical photos of City Creek when it flowed in the open on North Temple Street and interactive maps showing present-day locations of the city’s streams.