Among the hidden waterways of Central Park, the one that most closely resembles its pre-park appearance is The Loch, a creek that flows from The Pool towards Harlem Meer in the park’s northwestern section.

If you haven’t seen it without water, now is your chance as the path following this stream is undergoes reconstruction. Above is the Glen Span Arch, with a dried-up waterfall emptying from The Pool.

In its original design, Central Park was supposed to have its northern end at 106th Street but thanks to Central Park Controller Andrew Haswell Green‘s superb negotiating skills, additional land was purchased by 1860 to extend the park to 110th Street. This addition to the park preserved the ravine of Montayne’s Rivulet, which was redesigned  to include Harlem Meer, North Woods, and Great Hill. It also had a little-known cascade named Sabrina’s Pool, which I had written about earlier. The old rivulet had its source on the Upper West Side, flowing east and merging into Harlem Creek before emptying into the East River at 106th Street.

This “official surgeon” of New Amsterdam served as a Councilman, military commander on Manhattan Island, and as liaison in peace treaties with the native Lenape. As the highest ranking non-Dutch official in the New Netherlands colony, de la Montagne established numerous Dutch and Huguenot settlements along the Hudson River between New Amsterdam and Fort Orange (later renamed Albany). Examples in this state include New Paltz, New Rochelle, and Huguenot on Staten Island.

Over the decades, the doctor’s name was corrupted into Montayne and it stuck to the creek that flowed through his farm.

On the 1875 Hinrich’s Guide to Central Park above, there was another forgotten body of water within this system: at the time The Loch was a lake as its name suggests. (Loch is the Scottish word for lake)

Percy Loomis Sperr visited The Loch in 1933, at the time still a sizable pool of water. As with other constructed lakes in the city’s parks, when there is not enough maintenance provided, nature takes its course. Silt descended from upstream and down the ravine’s slopes, reducing The Loch to what authors Henry Hope Reed and Sophia Duckworth described as a flat bed of silt. “A more appropriate name would be ‘the Trickle,'” they wrote in the 1967 book “Central Park A History And Guide.”

In 1990, The New York Times returned to the ravine, reporting on the debate relating to its restoration; whether to restore it to its Olmstedian appearance as a pool of water, or as a more naturalistic brook in a ravine. Reporter Christopher Gray described the debate as a balance between “habitat, security, scenery, recreation and history.” The result was a naturalistic brook that retained its Scottish name but not its original appearance. 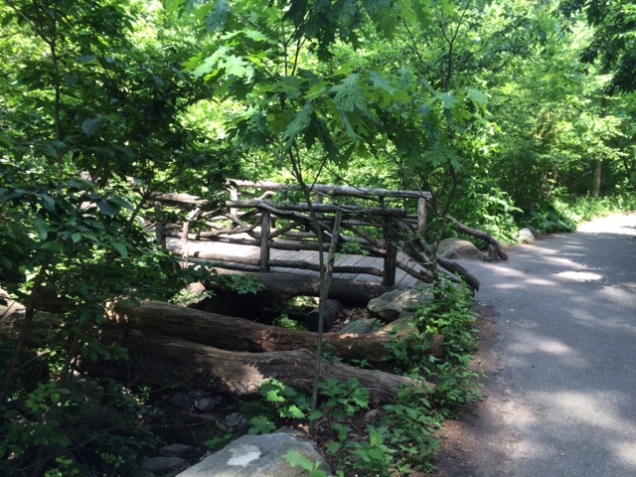 End of the Loch

In December 1962, the city’s Board of Estimate approved a $1.8 million combined ice skating and swimming facility at the southwestern tip of Harlem Meer, where The Loch enters the lake. $600,000 of the project’s cost was funded by the estate of Loula D. Lasker, who was subsequently honored as the facility’s namesake. It opened in 1966. The structure contains the only swimming pool in Central Park, located in a socially acceptable site, close to the low-income Harlem tenements and public housing projects whose residents it was intended to serve. A modernist structure, its design contrasts greatly with the Victorian rustic style of the park’s other facilities.

The construction of the Lasker Rink and Pool shrunk the size of Harlem Meer from 14 acres to 11, an example of postwar buildings in the park that preserved open space on land in the park at the expense of its waterways. Above, we see The Loch draining into a sewer that runs beneath Lasker Pool and empties into Harlem Meer on the other side of the pool.

Why you should visit The Loch

The section of Central Park that was secured by Andrew Haswell Green is the least visited but at the same time, the most topographically challenging, filled with natural and historical sites. In contrast to the park’s other forest, The Ramble, you won’t see selfie sticks or street performers here. Only a few true New Yorkers who know about this hidden corner of Central Park. Here’s one look at the dried-up Loch as it will soon be refilled with water.

Pittsburgh Courier reports on the city’s acquisition of the 600-acre Hays Wood, to become the largest park in Pittsburgh.

Huntington Herald-Dispatch of West Virginia writes on the development of a new riverfront park in Toledo, Ohio.

18 thoughts on “The Loch, Central Park”