While visiting a Parks work shop this morning, I found a 1988 Hagstrom map hanging on the wall with Mussel Island, Newtown Creek’s phantom island making its appearance. Also on the map, Hagstrom’s Maspeth office, the now-abandoned stations on the LIRR Montauk Line, the now-defunct Brooklyn Union Gas Company…

Towards the bottom of the map is the now-forgotten Evergreen Branch, a freight rail line running along the Brooklyn-Queens border.

No one ever lived on Mussel Island, it was a small and marshy piece of land at the confluence of Maspeth Creek and Newtown Creek.

Some Hagstrom Maps put the phantom island entirely within Brooklyn waters while other maps have the island shared by the two boroughs. 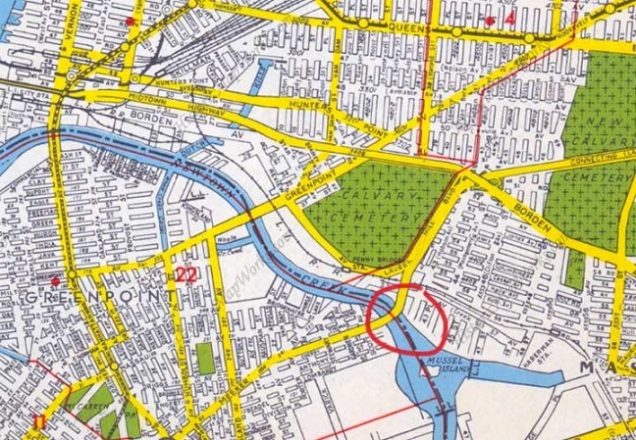 Relying on aerial surveys of Mussel Island from the 1920s, the island is in the middle of the stream, giving both boroughs a claim for it, but older maps show it as outside of Brooklyn. With the island’s disappearance, the borough border line appeared on most maps in the middle of Newtown Creek, where Mussel Island once was. When the island went from real to phantom, Hagstrom had it divided between the boroughs, as in the 1949 map above. Circled is Kosciuszko Bridge, the highest crossing above the stream.

Relying on the DoITT CityMap that blends the present shorelines with a 1924 aerial survey, we see Mussel Island almost entirely within the present-day waters, with a tiny portion on what is now Brooklyn land. Back in 1924, the island was closer to Queens, and with 19th century maps as a reference, when it existed this island belonged to Queens.

Founded in 1916, Hagstrom was once the go-to authority for maps of the city and nearby cities. With the advent of GPS and satellite surveys, hand-drawn maps became obsolete. Hagstrom closed its Midtown Manhattan map shop in 2010, and was acquired by the Kappa Publishing Group that same year. Without Hagstrom, there is no Mussel Island.

When taking the Grand Street Bridge across Newtown Creek, one notices the avenue narrowing to two lanes as it uses a century-old swing drawbridge to cross Newtown Creek. Not known to travelers today is that this creek used to have two islands in it at its confluence with Maspeth Creek. 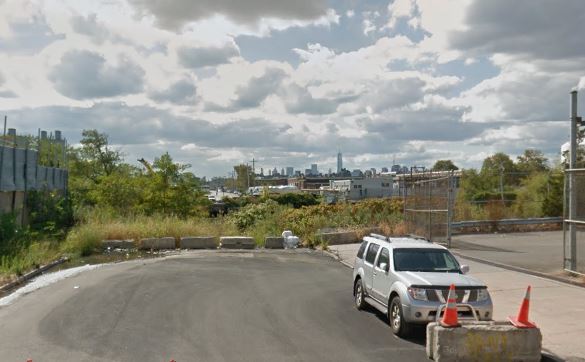 Nothing remains of the smaller Mussel Island, while the larger Furman Island has been fused to Queens. The former island is almost entirely industrial in use, with the exception of a small green piece of shoreline at a dead of 58th Road at 47th Street, where Maspeth Avenue once crossed over Newtown Creek. END_OF_DOCUMENT_TOKEN_TO_BE_REPLACED