On the Upper West Side of Manhattan, the natural contour of the island is evident in the valleys at 125th Street, 106th Street, and 96th Street. In the last one of these, Riverside Drive takes a viaduct above 96th Street and an eponymous neighborhood organization remembers the reason why West End Avenue here takes a dip on its way north and then rises again.

Another clue is William Rickaby Miller’s 1869 watercolor on paper titled Strykers Bay. In this painting we see an unnamed brook flowing towards the Hudson River with the Palisades of New Jersey in the background. This obscure stream is today’s West 96th Street.

On the 1868 Otto Sackersdorff survey of Manhattan farms as they were in 1815, we see an indentation in the Hudson River shoreline at 96th Street on land owned by James Stryker. The brook flowing into this cove originated from three branches within a ten-block radius. The grid-defying north-south road here is Bloomingdale Road, later absorbed into the famous Broadway. On the far right of this map is the north branch of Saw Kill, which flowed eastward towards the Upper East Side.

The first member of the bay’s namesake family to settle here was Jacobus Stryker of Haarlem, who arrived in 1640. In the old country he was a painter, but over here he served as an alderman and made his living as a farmer and trading fur with the native Lenape people. Perhaps his artistic background inspired him to establish the farm at this picturesque location. In the 1851 Valentine’s Manual of New York, artist G. Wayward illustrated Major General Garrett Hopper Striker’s home on 96th Street. In the War of 1812, he commanded the garrisons in what is today northern Central Park.

By the middle of the 19th century the Stryker descendants had sold their centuries-old farm and urbanization proceeded here. In 1846, the Hudson River railroad was extended along the water’s edge, locking in Strycker’s Bay which was filled in the 1860s. In the above photo from the Museum of the City of New York we see Riverside Drive curving around the site of Stryker’s Bay with the train tracks running along the shoreline..

On the 1879 G. W. Bromley property survey we see the shoreline as a straight line on the far left of the map with Riverside Park offering a green edge to this section of Manhattan. The dotted line trace of the unnamed brook appears on 96th Street. I am not sure if Riverside Drive was completed by then, or if the roads on this map were merely paper streets in anticipation of development.

Between 1900 and 1902, the 96th Street Viaduct was built to carry Riverside Drive across the now-filled valley that was Strycker’s Bay. The crossing isn’t as famous as Riverside Drive’s viaduct across Manhattanville,  but it features all the elements of  Beaux Arts style that was popular in western cities at the time. The above photo was taken in 1917 by Eugene De Salignac. Behind this bridge are the iconic Cliff Dweller Apartments.

The next great alteration to the site of Strycker’s Bay was between 1934 and 1937, when New York City planner Robert Moses had the shoreline train tracks covered by landscaping and the Henry Hudson Parkway. The project greatly expanded the size of Riverside Park, removed the 96th Street sanitation pier and coal storage tower, creating the popular clay tennis courts that are still there today. In the above photo from the NYPL Digital Collections, we see Strycker Bay being filled and the straight seawall shoreline of the park nearly complete. The train tracks are invisible, hidden below the highway route under construction.

Looking downhill today from the same vantage point as the 1869 painting, nothing remains of Strycker’s Bay besides the valley containing W. 96th Street. One unusual item on this block is the city’s only public indoor gas station. It is important to note that when many of New Yorkers regard the Hudson River Valley as the picturesque region between Yonkers and Albany, prior to urbanization the entire shoreline north of Midtown was a magnet for landscape painters and mansion owners.

The retention of the shoreline north of 72nd Street for Riverside Park preserves some of the natural look of the river as seen by its namesake explorer in 1609, albeit with a straightened shoreline.

In the cove space on the water’s edge are the Riverside Park red clay tennis courts, the only such facility in the city. The courts are named for Oscar Hijuelos, the Pulitzer laureate novelist who lived nearby and died in 2013 while playing the game here.

W. 96th Street no longer reaches the Hudson River, blocked off by Henry Hudson Parkway and its set of ramps. On the north side of this street, a depression carved into the landscape contains Dinosaur Playground, with its statues of the prehistoric creatures.

The name of this historical waterway is used today by the Strycker’s Bay Neighborhood Council, a neighborhood advocacy group. 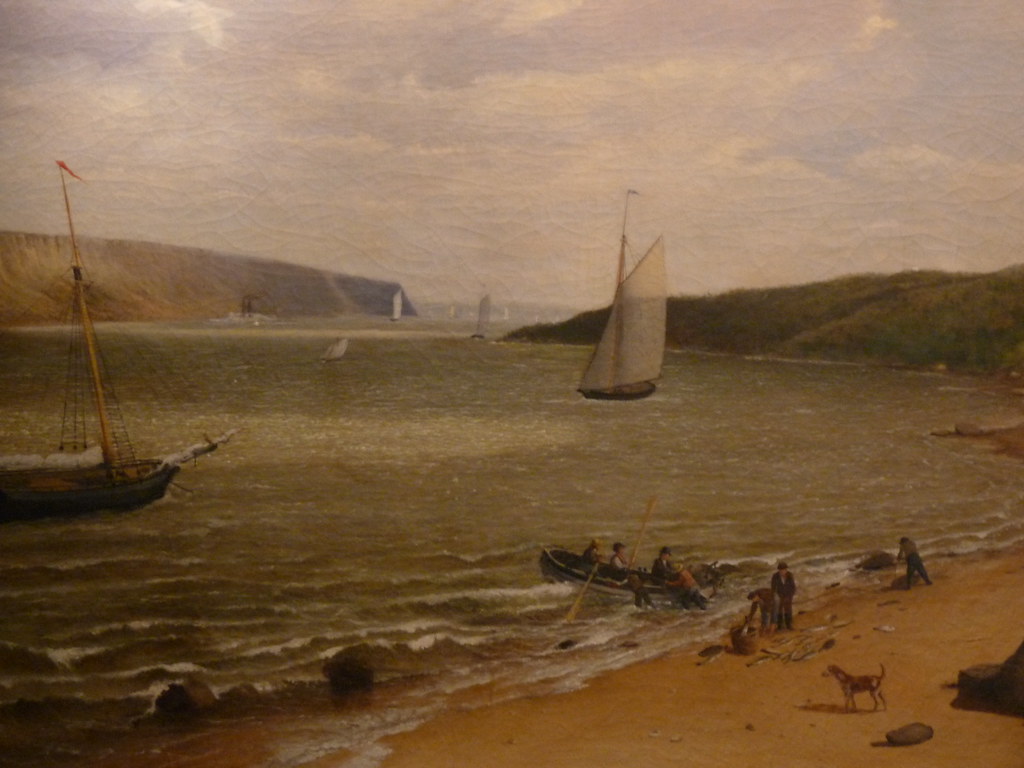 Artist William Rickaby Miller was regarded as a member of the Hudson River School genre, specializing in landscape paintings of the great river. Nearly 30 blocks to the north of Stryker’s Bay, his contemporary Victor Gifford Audubon painted a scene of the Hudson River looking north from today’s West Harlem Piers Park towards Jeffrey’s Hook. 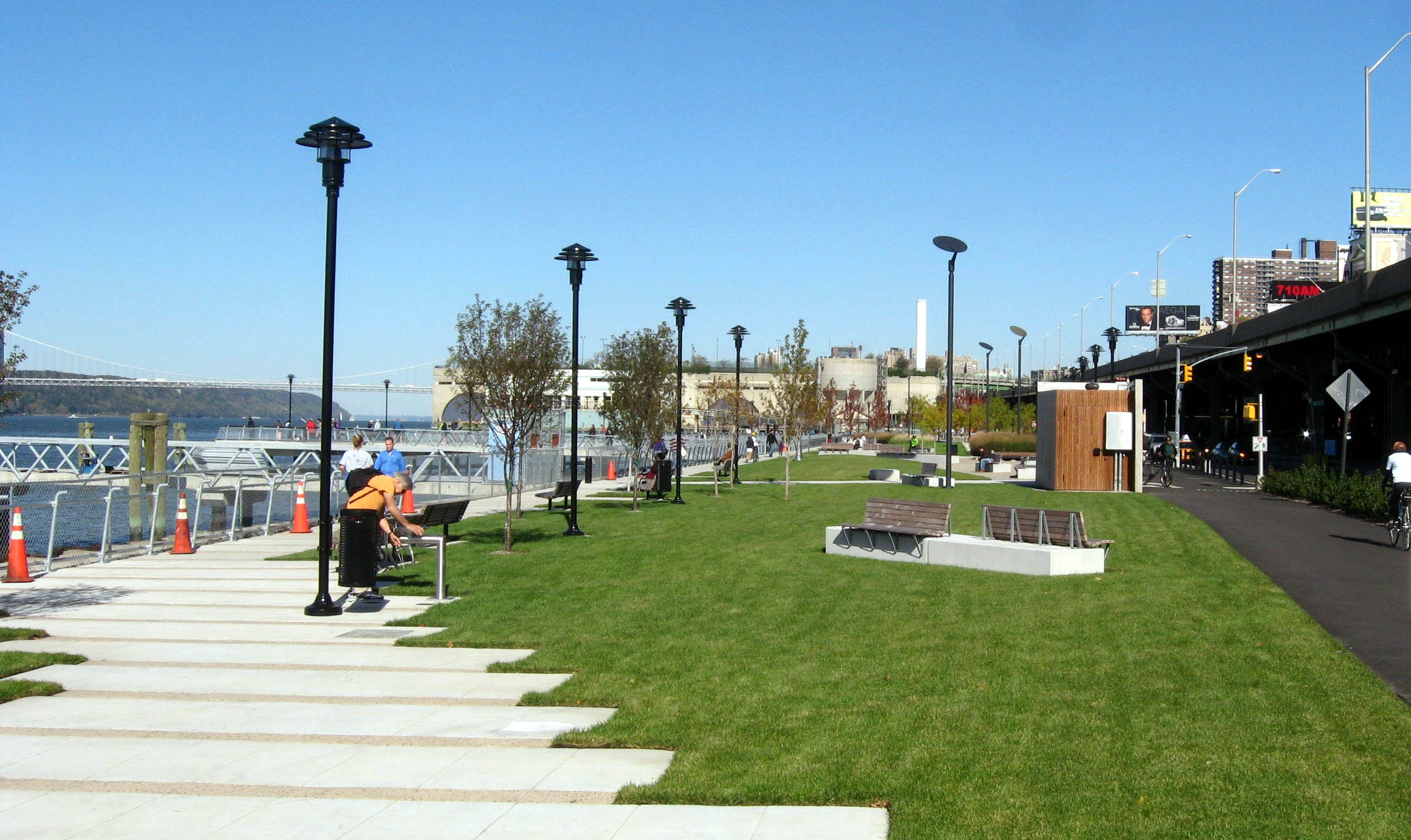 Jeffrey’s Hook today has a lighthouse at the hook with the George Washington Bridge running above it. Closer to the site of Audubon’s easel is Riverbank State Park, which partially blocks view of the bridge and Jeffrey’s Hook.

Covering the cove at 125th Street is a new park that opened in 2009, connecting the northern and southern sections of Riverside Park as a continuous green shoreline. Audubon’s father was the famous ornithologist who owned a sizable estate another 30 blocks to the north that overlooked the river.

Places such as Strycker’s Bay connect today’s Manhattan with its natural past, much of which can be found in Eric W. Sanderson’s Welikia Project and the encyclopedic tome Mannahatta: A Natural History.