When researching cities with hidden waterways, most have examples that were forced underground in the 19th and 20th centuries. In the western French city of Bordeaux, there are two hidden streams that haven’t seen daylight in centuries. 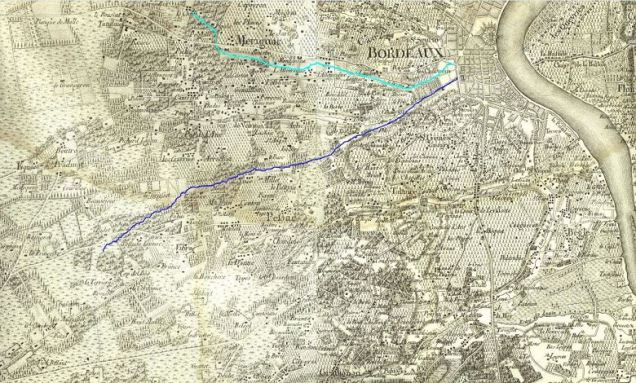 Above is a map of Bordeaux drafted shortly before the French Revolution. Two rivers are seen flowing towards it. The Peugue in dark blue and the Devèze in aqua. At the city’s edge, they disappear beneath the streets on their way to the Garonne River.

A Short History of the Peugue 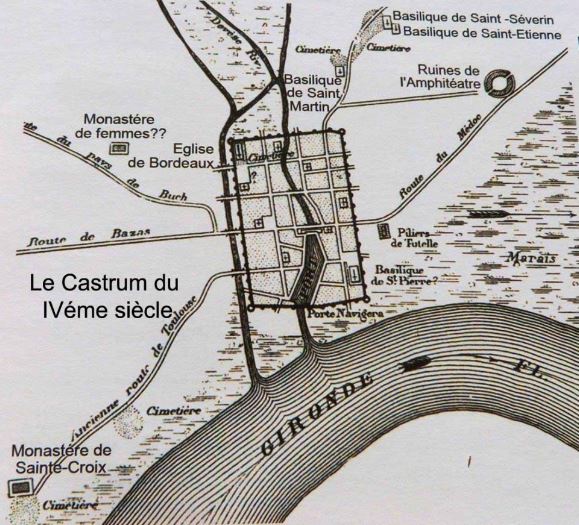 Prior to the arrival of the Roman legions, the area was inhabited by Bituriges Vivisci Celtic tribe. The name for this bend in the Garonne River, Burdigala is believed to be of Aquitanian origin, as these people lived nearby to the south of the bend. At this bend, the Peugue and Deveze merged and then split in a miniature delta that emptied into the Garonne. The Romans allowed the Devèze to run through Burdigala where it was widened into a harbor, while the Peugue was straightened to run along the city’s southern wall.

Following the imposition of Roman rule in 60 BCE, the settlement was fortified with the mouth of the Peugue carved into a harbor protected by a gate. Inside the town’s walls, streets were laid out in a grid. The map above is from 1100, showing the endurance of the Roman plan. Fighting between the Frankish duchies, and raids by the Arabs, Vikings, and English impeded the city’s growth. With the on-and-off wars of the Middle Ages, the city did not expand beyond its Roman walls until the 12th century. 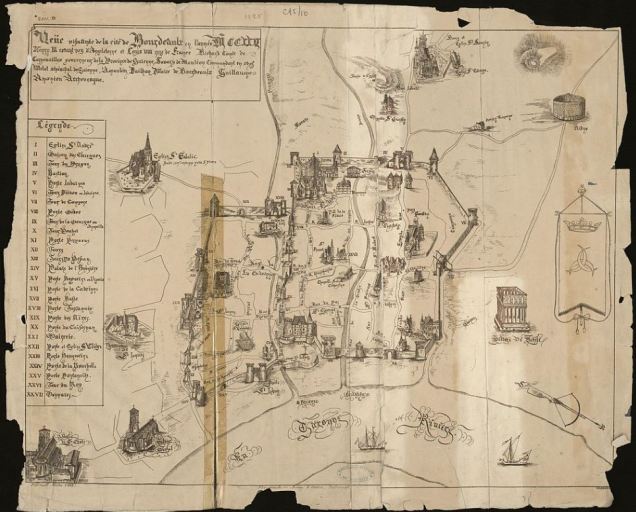 Above is an 1862 Gustave Chariol illustration of how Bordeaux appeared in 1229. As the capital of the influential Duchy of Aquitaine, the city expanded south (left on this map) across the Peugue, building a second wall, while retaining the Roman wall along the stream’s northern bank. The Roman harbor had long been covered at this point and on the north, the wall was gone and replaced with a new wall further north. Additional cathedrals and churches were built, as Roman ruins remained on the city’s outskirts. At the time, Aquitaine was an English possession ruled by the French-speaking Plantagenet dynasty. It was a trans-national empire that transcended the English and French ethnic identities. In 1453, the French gained control of Bordeaux, ending the Hundred Years’ War. 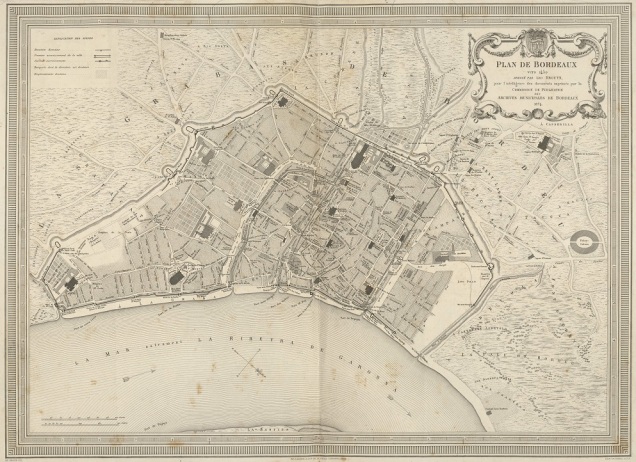 In 1874 cartographer Leo Drouyn produced a map of how Bordeaux appeared in 1450, after a third wall had been built. The Peugue River meet the Devèze and then splits from it outside the city wall, northwest of the Saint Andrew’s Cathedral. It enters the city as a ditch, dammed by two mills on its way to the Garonne. Each mill, bridge, and street, and guard tower by the stream has a name.

Bordeaux in the Kingdom 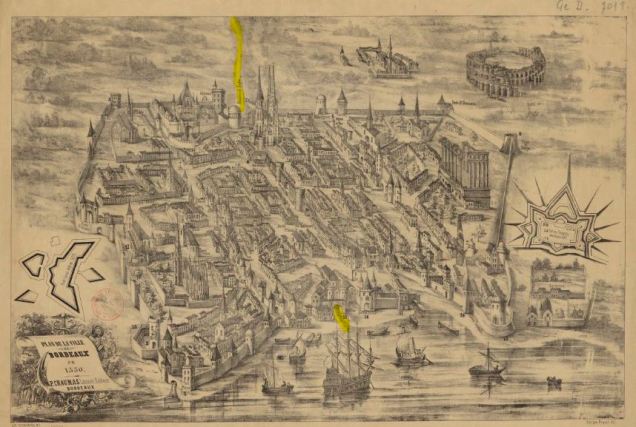 Following the end of the Hundred Years’ War, the French kingdom consolidated internally, with Paris exercising greater control over the various duchies and provinces within its realm. A century later it would send out explorers to claim places in the New World for France. With its location close to the ocean, Bordeaux benefited from the nation’s colonial exploits.

In the 1550 Adolphe Hequet plan, it is difficult to say whether the image above is accurate or idealized. It shows the Roman ruins on the outskirts, along with the star-shaped forts that had yet to be completed. The Peugue disappears beneath the streets upon entering the city and reappears shortly before draining into the Garonne. I highlighted the surface portions. The Devèze does not appear anywhere on Hequet’s map, other than on Devèze Street, laid atop its buried course. 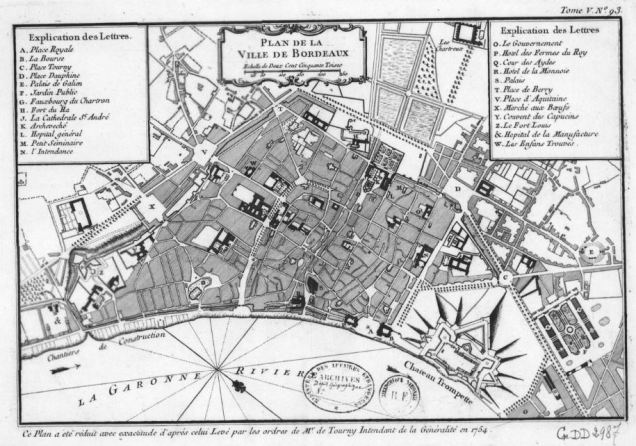 The 1754 Jacques-Nicolas Bellin plan for Bordeaux omits both rivers entirely. The rectangular outline of Burdigala is seen here enveloped on the north by the Chateau Trompette fortress and on the south by the larger blocks of the expanded city. On its western edge is the sprawling Chartreuse Cemetery. 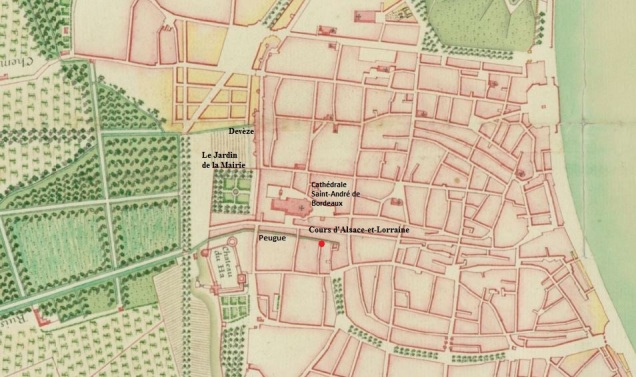 On the 1758 map of the city, the Peugue is still flowing past Saint Andrew’s Cathedral before going underground at present-day Duffoure Dubergier Street. A block before it entered the culvert, there is a street that dead-ended at the creek, marked with a red dot on this map. 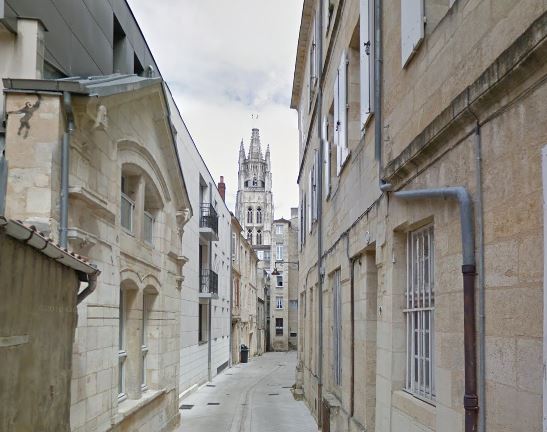 This dead-end is still there today, appearing as Impasse Birouette, which branches off from Rue du Hâ, a block south of the cathedral. The building at the dead-end was constructed atop the buried streambed. In New York, I’ve found similar end-ends and streets with curves that preserve the courses of long-buried streams. On the alley’s left side is are historic and postmodern walls of the École Sévigné Bordeaux, a private school.

For centuries, the banks of the Peugue contained numerous tanning workshops that polluted the stream, making it a breeding place for diseases, which led to calls for its burial. Daniel Heimmermann’s 2014 book Work, Regulation, and Identity in Provincial France: The Bordeaux Leather Trades, 1740–1815 tells the story on how the leather and parchment makers impacted the city’s two streams. By 1815, the last year of Napoleon’s empire, the Peugue had been covered entirely beyond Saint Andrew’s Cathedral. 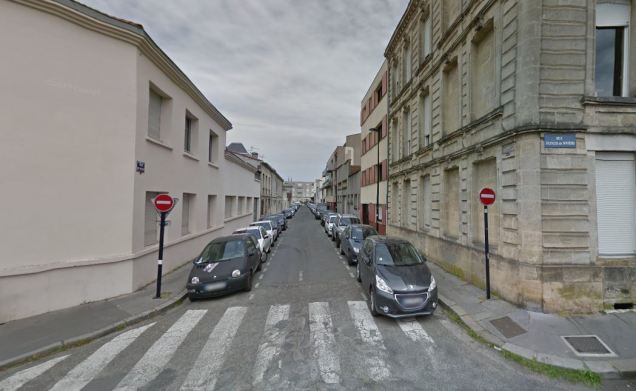 In the following century, it was covered almost entirely within the city’s borders. to the southeast of the Chartreuse Cemetery the one-block Rue du Peugue runs atop the covered streambed. It is an architecturally nondescript street, but in the late 19th century, Rue du Peugue was used to describe streets further downtown along the streambed, including one that had a piece of the city’s Roman wall, as documented by Leo Drouyn. 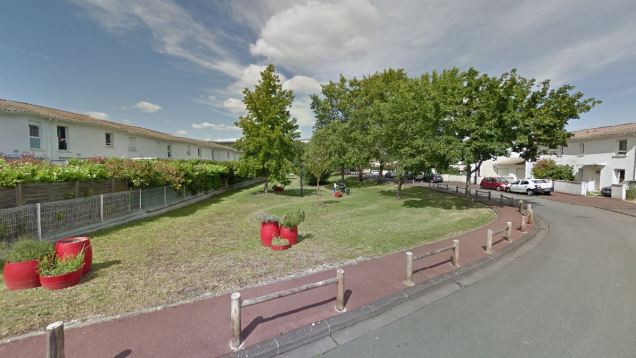 Towards the city’s west, there are more open spaces atop the former streambed and depressions in the topography that indicate where the Peugue flowed. A small park at the bend where Rue du Doyen Cirot becomes Rue Jean Baldé in the Saint Augustin neighborhood follows the former course.

Wine on the Water 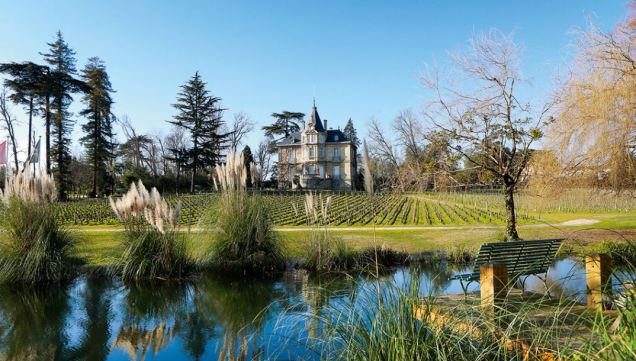 To write about Bordeaux and not mention its eponymous wine? The Peugue offers an example near the present Bordeaux city line. Chateau Les Carmes Haut-Brion sits atop the stream with a small pond facing the historic mansion. Along with the pond, there is also the postmodern wine cellar designed by Philippe Stark, appearing as a metal blade jutting out of the water. This pond is a remnant of the Peugue. 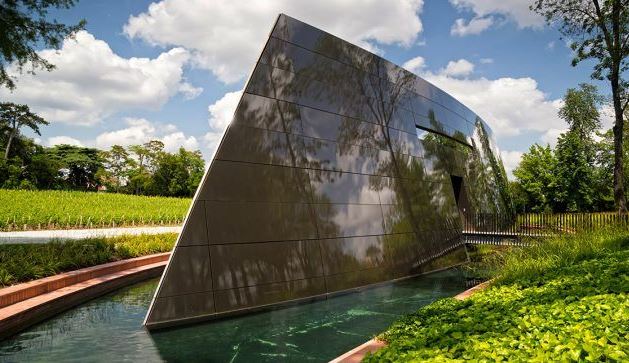 Les Carmes Haut-Brion was a much larger property a century ago, today still sizable but hemmed in by suburban tract housing. Upstream and downstream from this winery, the Peugue runs beneath the surface.

To see the Peugue flowing freely on its natural course, one would have to travel to Pessac, the suburb of Bordeaux where the river can be seen above the surface.

While there are not so many reminders of the Peugue River along its underground section, within Bordeaux the Deveze is clearly marked in the section where the city began. In the city’s oldest section, the three-block Rue de la Devise runs atop the site of the harbor carved by the Romans out of the Deveze. It is a very narrow street lined with centuries-old buildings. A shorter one-block Rue de la Deveze can be found on the south side of the Chartreuse Cemetery. Further inland near the Place Mondesir traffic circle is Rue de la Lavoirs, which translates as Laundry Street, named at the time when this river was used for washing clothing.

At this point, I should mention that what Forgotten-NY does for NYC, Tim Pike’s Invisible Bordeaux does for this city. It has detailed photo essays on some of the unusual sights of the city, including its hidden waterways. In France, urban explorers can also visit Invisible Paris and Invisible Lyon.

Pike’s video mentions the origins of the streams’ names: Peugue is derived from the Latin pelagus– the overflowing of water; while Devèze comes from Divona, a Celtic goddess whose name is related to the word divine. The late Roman poet and Bordeaux resident Ausonius, wrote a poem about this river, praising it as “holy, gracious, unfailing, crystal clear, azure, deep, murmorous, shady, and unsullied.” 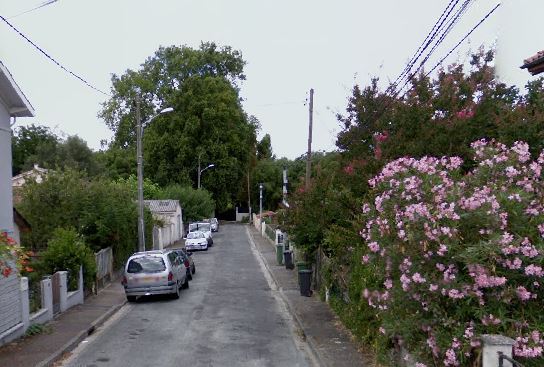 Like Bordeaux, Pessac has its own Rue du Peugue, a dead-end abutting the Haut-Brion winery. Where this street dead-ends, the Peugue used to flow on the surface. Here it is underground while the former course serves as a property boundary. 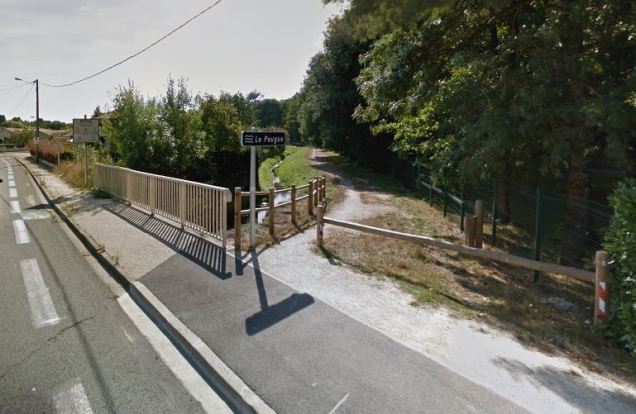 The first crossing on the stream where the water is seen and signs mark the river is on Avenue du Pont de l’Orient, on the border of Pessac and Merignac. Here, the stream is followed by a trail, but that trail follows the Peugue for roughly a mile. Further upstream, it snakes behind backyards and flows across excess water detention basins. 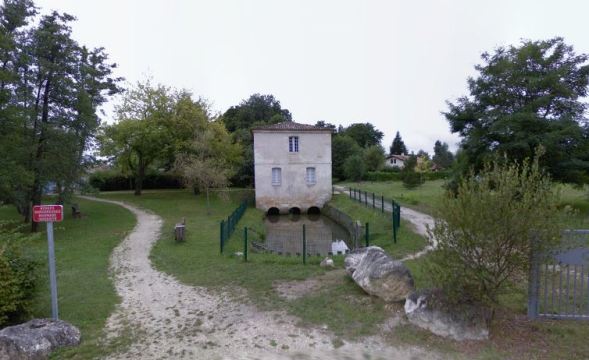 On this trail there is an unused mill built during the reign of Louis XV. In 1761, the king’s council decreed the construction of an experimental farm at this site to address a grain shortage. The Bellevue farm opened in 1769 by Bordeaux shipping executive Jacques-Alexandre Laffon de Ladebat. Prior to the farm, he made his wealth trading in slaves, weapons, and wine. Looking upstream from Avenue des Noes, the Peugue appears in the form of a millpond. 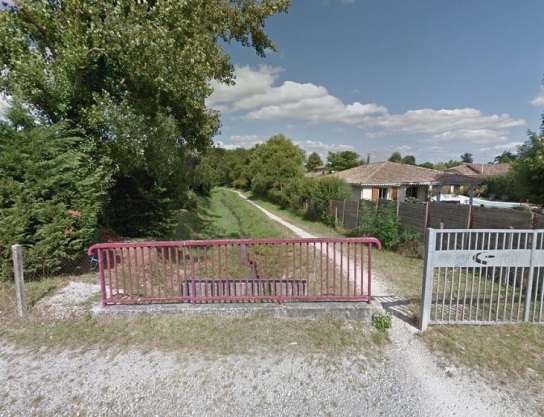 Looking downstream from Avenue des Noes, the Peugue is again a trickle followed by a path. The municipality of Pessac is on the right and Merignac on the left.

At its headwaters, the Peugue is sheltered in a thick forest preserve, the Bois du Sources du Peugue. At the eastern entrance to this park the Peugue appears as a ditch.

The park features informative signs detailing the river’s route and history. As you’ve seen in my previous articles, I take park signs seriously. A park without a sign is missing the park’s story and sense of place.

I had earlier documented La Bièvre, the hidden river running through Paris. That’s how this blog works. For every famous urban river, there is a hidden tributary with a rich history that deserves to be told.