The 1866 city plan of Zaragoza shows the rectangular outline of the Roman settlement with the Huerva River flowing to its south. Further away from the city is the Imperial Canal from the late 18th century that parallels the Ebro River. 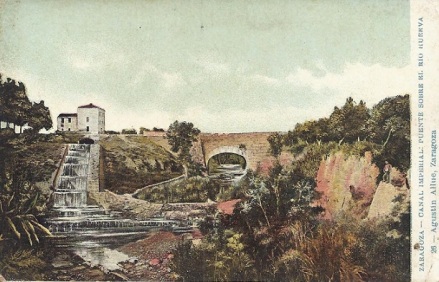 The canal crosses the Huerva on a bridge akin to the Pont Du Gard in France, where one waterway flows above another. In this undated postcard looking upstream we see a cascade that channels the canal’s excess water into the Huerva.

This scene today is not as visible on account of thick vegetation and roads constructed that follow the canal’s banks. The tower on top of the cascade is the Almenara de Nuestra Señora del Pilar, which regulates the flow. The building has a Catholic name in this historically religious country, and the roads lining the canal are named Infantes de España (Princes of Spain) and Reyes de Aragon (Kings of Aragon). Spain still has a titular monarchy to this day, but with little actual power. 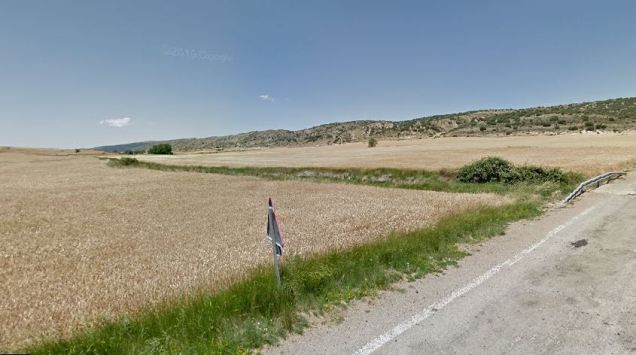 The source of the Huerva is 80 miles away from the city in a plain between the villages of Fonfria and Allueva. The headwaters of the Huerva nearly touch the source of the Aguasvives River, whose name translates to “living waters.” The Huerva then flows north towards Zaragoza, collecting tributaries along the way and gradually descending into a ravine. Its name comes from a paleo-European term meaning “to flow.” Within Zaragoza, the stream doesn’t receive so much attention in its thickly wooded ravine. One exception is the Cantautores (songwriters) Bridge that was completed in 1929 with a historically-inspired design. The pedestrian bridge is the main entrance to the Grande Jose Antonio Labordeta Park, named after a local singer, writer, and politician. 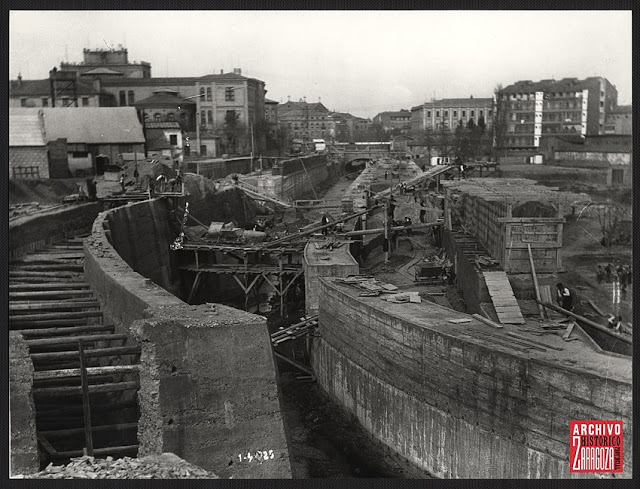 As the city grew closer and then around the stream, flooding and pollution resulted in an ambitious campaign to tame its course and conceal it beneath grand boulevards that offered open space to the public. In the above 1925 photo from the Historical Archive of Zaragoza, we see the ravine being transformed into a canal which would subsequently be covered. Its appearance here resembles the Wienfluss that I documented in 2016.

Most Zaragozans of that time did not regard the Huerva as an ecological or historical resource, but merely as a nuisance that deserved to be concealed. Atop the stream the Gran Via (Grand Way) and Paseo de la Constitucion (Constitution Way) serve as linear parks and streetcar routes. The tunnel’s height was design to accommodate high water levels during floods.

Walking on the median of the Gran Via, there are no hints of the stream flowing below. Plenty of benches, trees, bike lanes and streetcar tracks that offer a pedestrian-friendly route through the city. Along this green corridor are fountains and monuments testifying to the city’s history.

Certainly there’s room here for a daylighted stream but it would mean less open space for pedestrians and bikes. A park is a democracy with competing interest groups. In this century cities worldwide are considering the prospect of daylighting hidden waterways, but for Zaragoza, the need for more parkland prevailed over the cause of stream restoration.

At Plaza Paraiso traffic circle where Gran Via, Pamplona Way, Independence Way, Sagasta Way, and Constitution Way converge is the Museum of Natural Science of Zaragoza University. This home of dinosaur skeletons overlooks the Gran Via and its buried stream. The location offers possibilities of connecting the museum to the waterway flowing beneath the street and right past the building.

At the turn of the millennium city authorizes recognized that the supports holding the Gran Via were severely deteriorated. In 2010 they were removed and the river was exposed to daylight for the first time in nearly 80 years. A few architects and city planners dreamed and illustrated the possibility of the Huerva serving as Zaragoza’s version of the Cheonggyecheon, the world’s best-known daylighted urban river.

Looking at a photo of the exposed stream flowing past the Natural Sciences Museum, from the Periodico de Aragon photo essay, I remembered the Little Saint Pierre River in Montreal and its dried-up underground conduit that flows through the basement of a museum. Perhaps a window, balcony, or walkway that connects the museum to the stream? Recall that in Sydney there are walking tours given of Tank Stream, that city’s historic underground river.

The first sizable plaza above the covered stream is Plaza Paraiso, which experienced redesigns since its creation that included a circular fountain, planted traffic circle, and most recently expansion into an oval bisected by trolley tracks. Looking upstream from Constitution Way, we see a former bank on the left and the Natural Sciences Museum on the right, with Gran Via between them. The pyramidal pillars in the foreground is the Constitution Monument from 1989 symbolizes the three branches of government. It stands atop the covered stream. 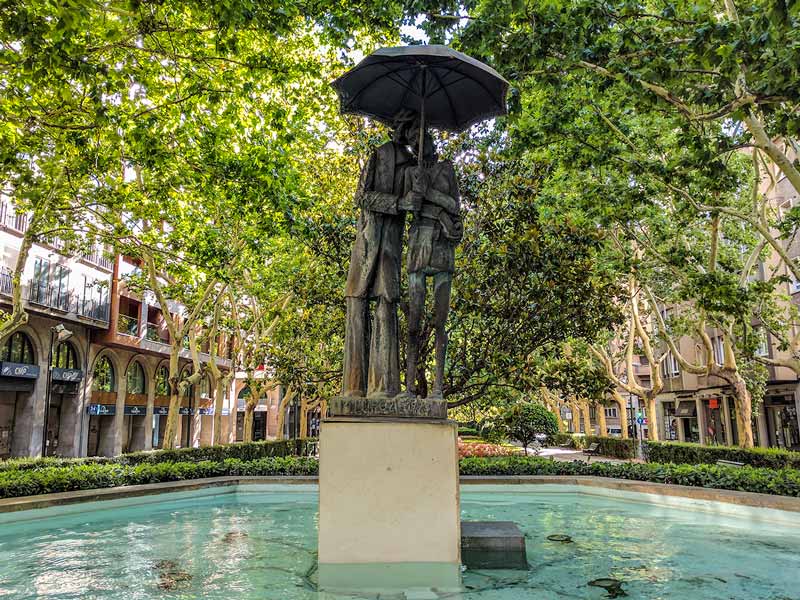 Further downstream on Constitution Way is the 1973 sculpture titled “Couple walking under an umbrella” by Manuel López García that represents the young sculptor and his would-be wife walking in the rain.

The buildings along this road share historic-inspired designs, but none predate the covering of the stream in 1927. The neighborhood here appears older than it really is. 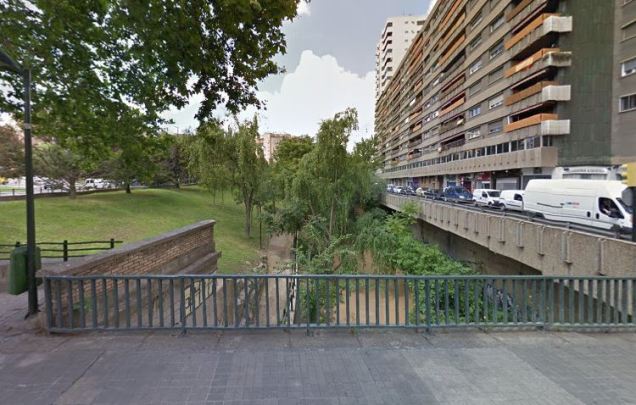 The stream reemerges from its tunnel behind a public plaza at the corner of Cesáreo Alierta Avenue and Glorieta Esperanto. It flows through a ravine, past apartment buildings and Bruil Park. 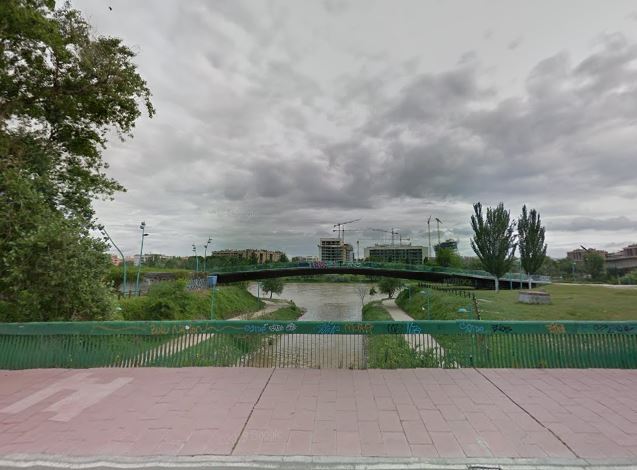 The Huerva River flows into the Ebro at Tenerías Park, where its water turns right and flows for another 190 miles before emptying into the Mediterranean Sea at the Ebro Delta.

Rome if You Want to:

Zaragoza (sometimes spelled in English as Saragossa) isn’t the first Roman-built city that I’ve documented. Take a look at Bordeaux and its Peugue River, or Cluj-Napoca and its Canalul Morii.

Within Spain I’ve previously written about the Manzanares River in Madrid. I would love to visit this country and research its many other urban waterways. In particular, Valencia, where the Turia River was rerouted around the city center with its old course transformed into a linear park.