In October 2014, Mayor Bill De Blasio and Parks Commissioner Mitchell J. Silver announced a program, the Community Parks Initiative (CPI) to expedite the reconstruction of 35 under-served community parks across the city that have not seen repairs in a long time, and located in densely developed neighborhoods with low-income populations. Among the nine parks selected in the Bronx that year, Saw Mill Playground has a history and name related to a hidden stream that once flowed near the property, Mill Brook. 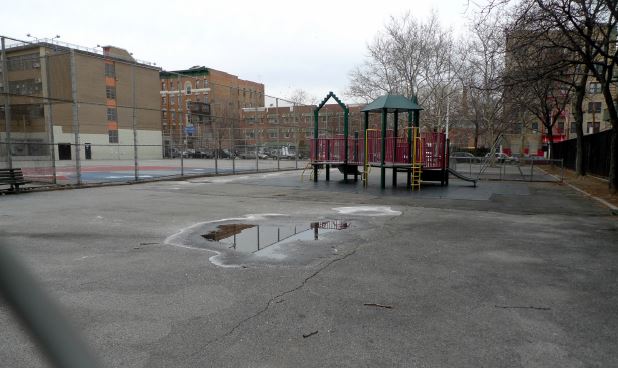 Completed in 1974 as a schoolyard for P.S. 49, now the Mario Salvadori School (M.S. 222), the park offered very little permeable surface. It was a paved lot with no connection to Mill Brook until 1987, when Parks Commissioner Henry J. Stern gave the playground its name.

Known to natives as Acrahung, this stream originated just west of the present-day Fordham University campus, running south along the Metro North Railroad’s Harlem Valley line towards the village of Morrisania. It then continued along the route of Brook Avenue before emptying into Bronx Kill. Towards the end of the 19th century, the stream was straightened and gradually covered as the surrounding Morrisania and Mott Haven neighborhoods developed. 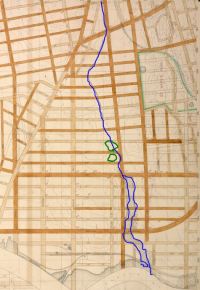 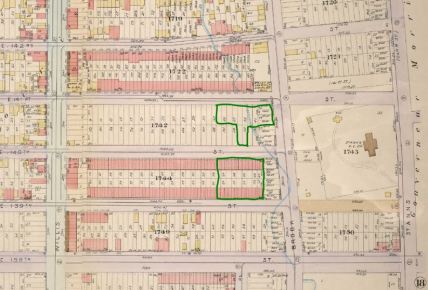 In the 1873 and 1887 atlases of Mott Haven, the streambed is visible and for reference, I marked the sites of Brook Park and Saw Mill Playground as they relate to the stream. A block to the south of the playground, Mill Brook widened considerably before entering the Bronx Kill. 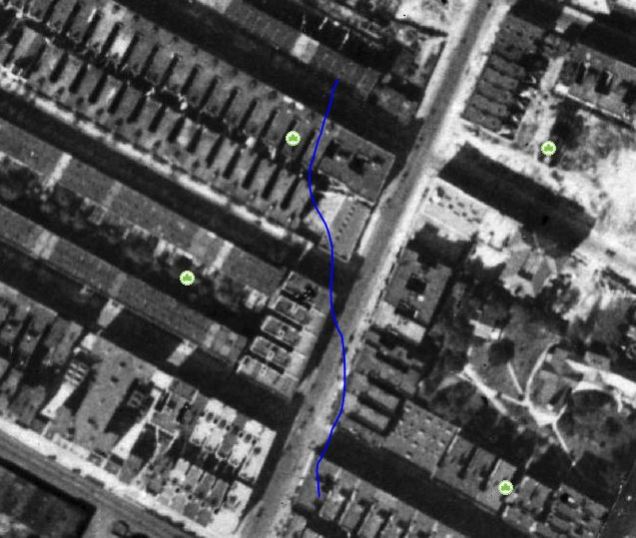 By 1924, when the aerial above was taken, nothing remained of Mill Brook. On the DoITT CityMap, the Parks logo identifies the future sites of Brook Park and Saw Mill Playground. At the time, tenement apartments occupied the sites. In the 1970s, the neighborhood suffered a tremendous decline. Many of its apartments were abandoned and subject to vandalism and arson. In their place, some of the empty properties were occupied by local residents who transformed them into gardens. In 1979, the garden located between 140th and 141st Streets was acquired by Parks and designated as Brook Park. The P.S. 49 Playground was on the block to its immediate south.

Since 1999, Friends of Brook Park has operated the community garden inside this park and among the projects on its wish list is the creation of a self-contained wetland within the park that would evoke the historic stream that once flowed through the property. In a way, it would resemble the Master Plan of Queens Botanical Garden, which also proposes a wetland on its property atop the streambed of what was Kissena Creek.

Outside of Brook Park, there is very little available open space along the former course of Mill Brook, but the presence of Saw Mill Playground on an adjacent block means that the two parks could be developed in tandem with a design that would match the two parks with the historical stream as their common link.

In its current state, the playground is comprised of a schoolyard and a smaller paved space containing trees, benches, and play equipment. Ironically, the name of the playground is derived from the creek’s alternate name, Saw Mill Creek. There was never an actual saw mill ever on the site of this playground.

What to Expect from CPI

Once a park is selected for CPI, scoping meetings take place in the surrounding community to gauge public reaction and incorporate park goers’ input into the design. As the above composite design by the firm Quennell Rothschild shows, a redesigned park would fill in the unused paving with plants, install separate play equipment for different age groups, synthetic turf for sports, and asymmetrical paths that encourage exploring. With the recently-introduced Parks Without Borders in mind, a redesigned park would have wider entrances and either shed its chain-link border, or have one that is just four feet in height.

Keeping environmental sustainability in mind, the amount of rainwater that collected on the blacktop and flowed into the sewer system would be reduced by a quarter as a result of permeable paving and expanded space for soil and vegetation. On June 2, 2015, the architects submitted their design for Saw Mill Playground to the city’s Public Design Commission, which approved the plan. Funding is currently being procured for the project and construction is expected to begin this summer. 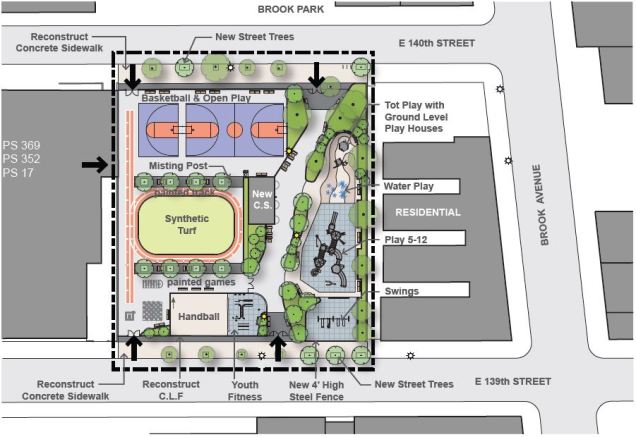 Although Quennell Rothschild’s design will not daylight a portion of Mill Brook inside the park, the winding path and spray shower amid the trees evokes some of the nature that was lost to urbanization more than a century ago. Anyway, as the old surveys show, the actual Mill Brook never flowed within the property anyway. The design responds to the wishes of the community for more active recreation as the plan above shows, basketball is still the top sport in the South Bronx.

Brook Park and Saw Mill Playground are not the only parks in the neighborhood that evoke the historic stream. A half mile to the southeast, Mill Brook Playground within the Mill Brook public houses also serves as a reminder of this hidden urban stream.

I’ve been here before

Between 2008 and 2009 as a student at the CUNY Graduate School of Journalism, I reported from this neighborhood for the school-sponsored Mott Haven Herald newspaper, founded by Pulitzer Prize laureate and Bronx resident Buddy Stein.

The London-based Guardian newspaper published an online photo essay of the shimmering colors of the polluted Gowanus Canal in Brooklyn.

Riverdale Press covers the effort to daylight Tibbetts Brook, or as I call it, #FreeTibbetts.