Having last visited Saw Mill Playground in the South Bronx in 2016, I returned to the site to take a closer look at its neighbor, Brook Park. Both of these parks commemorate in their names the long-buried Mill Brook. 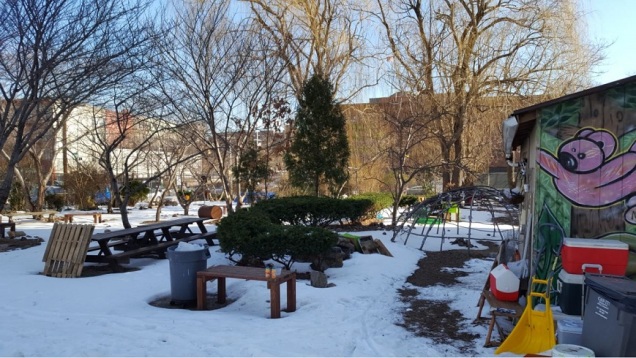 The stream was entirely covered in the 19th century, with its most visible surface reminder being Brook Avenue. At 141st Street, the community garden known as Brook Park also remembers the stream although it does not lie directly atop the former stream bed.

Looking at the 1873 Topographical Atlas of western Bronx, Mill Brook is highlighted with Brook Avenue running parallel to the stream. The two green circles are today’s Brook Park and Saw Mill Playground. This map was published shortly after the western half of the Bronx was annexed by New York City. The numbered street grid of Manhattan was extended north by city planners and a few parks were designated, including St. Mary’s Park which opened in 1884.

Streets colored in orange were already laid out at the time of publication, while those in lighter color would be completed shortly after. The extension of the Third Avenue Elevated line to the Bronx in 1886 sped up the urbanization of Mott Haven and the filling of Mill Creek. At the creek’s confluence with Bronx Kill, a rail yard was built atop reclaimed land that narrowed Bronx Kill and covered the mouth of Mill Creek. 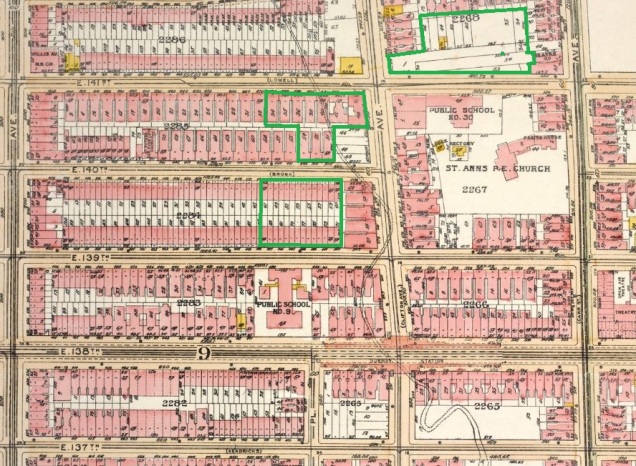 A 1921 G. W. Bromley property survey shows the covered Mill Brook running as a dotted line as Mott Haven was filled up with tenements. Only the old Saint Ann’s Episcopal Church stands in defiance of the street grid. On its grounds are the resting places of the Morris family, namesakes of Morrisania, Morris Park, Morris Heights, and Port Morris, who contributed to the local political scene in the years following the American Revolution. They used to own all of this land. On East 138th Street, the Brook Avenue subway station, which opened in 1919, straddles the former stream bed.

The parks outlined above, from top to bottom are: People’s Park, Brook Park, and Saw Mill Playground.

Since my last visit to Saw Mill Playground, the construction continues at this site. The project includes a new comfort station, and more green space where there used to be pavement. What appears above as a reconstructed streamed is actually going to be a planted median in a walkway where threes will be planted. So there won’t be a waterway here or any hints of a saw mill, but the reopened playground will have a spray shower operating in the summer season.

Back to Brook Park

On my return to Brook Park I was pleased to meet head gardener and lifelong neighborhood resident Daniel Chervoni, who was collecting discarded Christmas trees for mulch. When the Bronx was burning in the late 1970s, vacant apartment buildings gave way to empty lots. Residents who remained in the neighborhood reclaimed these lots as community gardens. Brook Park was acquired by the Parks Department in 1979 under the auspices of the South Bronx Neighborhood Open Space Development Project. 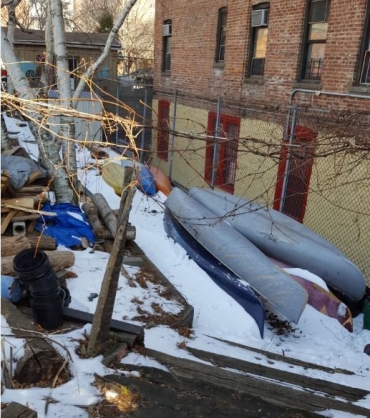 Since then it has functioned as an outdoor classroom where inner-city children learn about agriculture and healthy eating.

The park hosts a flock of chickens and a nearby apartment building had a nest built by red-tailed hawks who returned to the Bronx.

The group operating this garden, Friends of Brook Park keeps a set of kayaks in the park which it uses for tours of the Bronx Kill and Harlem River. In this spirit, there’s some sense of brook in the group’s name and that of its park.

Brook in the Park

As readers know, I’m obsessed with informative signage and Brook Park does not disappoint. Near its northern side is a sign made by Friends of Brook Park containing an 1873 map with the stream uninterrupted, an aerial survey, photos, and historical description of Brook Park.

Looking closer at the sign there is a plan for the park showing three ponds. The plan is to collect rainwater from surrounding rooftops and channel them into these ponds, which would finally give Brook Park’s name a more literal meaning. If I were to write a complete guide to community gardens across the city, I can easily mention those that have ponds. Some of them have resident fish and turtles! Examples include Liz Christy Garden, M’Finda Kalunga, 6BC Botanical Garden, and Albert’s Garden, among others.

A block to the east of Brook Park, across Brook Avenue is People’s Park, a 1.39-acre playground whose name evokes the iconic park in Berkeley, California that was created by countercultural activists. The one is the Bronx has a less turbulent history. It opened on July 22, 1934 as a public works project. In the photo below from Municipal Archives, the park is under construction. Prior to its completion, there were no small parks in Mott Haven, only the sizable St. Mary’s Park. 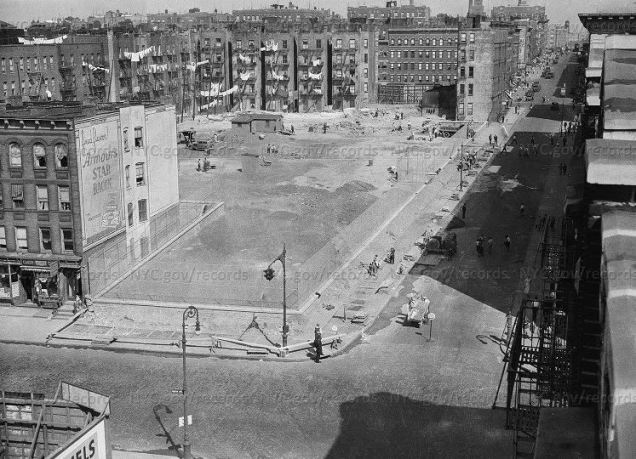 At the time it did not have a specific name. My guess is that like many playgrounds across the city, this could be a Henry J. Stern-ism. The only controversy here was in 2001, when this long neglected park had a casita (small Puerto Rican shack) on it along with a garden. They were razed in favor of reconstructing the park. Fortunately there are plenty of casitas and gardens across The Bronx.

Further south along the former course of Mill Brook is Millbrook Playground, which is enveloped the grounds of NYCHA’s Millbrook Houses, both built in the 1950s. Not much to write about here, its design is very standard.

Of course if the city wishes to take the runoff from the public housing towers and channel them into a bioswale that would flow across the property and the playground, that would certainly put the brook back into Millbrook. In any case the actual Mill Brook did not flow here but a few blocks to the west where Brook Avenue runs its route.

Aside from the foliage, not much has changed here when it comes to scenery.

In a 1959 Municipal Archives photo of this newly-opened playground, we see the public housing project in all of its supersized blandness, inspired by Le Corbusier’s “tower in the park” concept. East 135th Street here today serves as a service road for Major Deegan Expressway. Opposite the playground is the interchange where this highway meets the Triboro Bridge and Bruckner Expressway. The northbound on-ramp here is the first to indicate Interstate 87, marking the starting point of the 333-mile highway that ends at the Canadian border.

On this 1892 map of Hell Gate, we see Bronx Kill flowing between Randalls Island and the Bronx. Mill Brook is flowing into it but within a decade it will not appear anymore on maps.

From the northern shore of Randalls Island, one can see a sewer outfall emptying into the Bronx Kill lat the approximate location where Mill Brook used to flow. Brook Avenue is in the background behnid the boxcars, tracing the course of this forgotten stream.

Within a half century, Little Hell Gate that separated Randalls and Wards islands will also be filled. The twin islands used initially for hospitals and asylums appear as geological extensions of the Bronx but politically they’re part of Manhattan. Their story is told in The Other Islands of New York City, produced by the same publisher as my book.