The most detailed map with stream names on Great Neck and Manhasset Neck is from the 1963 federal Department of the Interior report titled “Hydrogeology of northwestern Nassau and northeastern Queens Counties” by Wolfgang V. Swarzenski.

Sticking strictly to geology, the author does not provide information on the history and namesakes of these hidden waterways. For unnamed streams such as the one near my uncle’s home, he refers to them as drains. In my years of writing on small streams, I’ve seen a creek, brook, run, bayou, gulch, arroyo, but never a drain.

In the community of University Gardens, one can see Merrivale Road taking a dip at Wensley Drive. A block to the north on Wensley Drive, between Somerset Drive South and Sussex Road, there is an undeveloped parcel where a ravine opens up. This is the present source of The Creek, an unnamed stream described by Swarzenski as “Cutter Mill Drain.”

The creek can be seen flowing out of a drain at Sussex Road but after a few yards it goes back into the ground at Northern Boulevard, concealed partially by the parking lot of Leonard’s catering hall.

The creek reappears in the village of Russell Gardens where it flows through a ravine in a naturalistic terrain that is Creek Park/Daniel Jay Berg Memorial. There are no historical signs in this park to explain its namesake and not too many sources online with the exception of The New York Times, which in 1972 reported on local housewife and substitute teacher Phyllis Ross who organized a petition to preserve this ravine from being developed. Within four weeks, she gathered 5,000 signatures requesting that the Great Neck Park District purchase six acres along The Creek from developer Sidney Berg.

He agreed to sell the land at fair market value, with the provision to have it named for his son, who was “very ecologically minded.” Daniel Jay Berg died in 1968 at age 22, during an open heart surgery. Ross’ effort was inspired by nearby campaign for Udalls Cove, where Aurora Gareiss and Virginia Dent organized a similar petition drive to preserve a stream flowing through a ravine.

The village of Russell Gardens is one of the smallest in the state, comprising of fewer than a thousand individuals living in 400 homes. The above map is from Historic Aerials, which offers more details than Google Maps. The village’s story began in 1902 when Captain Frederick Russell, operator of a tugboat company, bought an 80-acre farm from the Schenck family and developed his estate with landscaping that preserved the creek.

In 1924, developer Richard Kehoe and Russell Gardens Inc. purchased the property. The architecture was Tudor and the street names were English, reminiscent of Forest Hills Gardens. The village was incorporated in 1931. The above illustration of “The Ravine at Russell Gardens” is from the 1936 guide to Great Neck shared online by Great Neck Library.

The unnamed creek received log footbridges, goldfish pond, and a rose sculpture entitled ‘Spring’, by Jean-Baptiste Germain. I could not find the statue in the park, but there is an empty pedestal on the creek that has no explanatory text for it.

The stream is paralleled by a footpath through Creek Park where one can experience an untamed terrain in this landscape of neatly trimmed lawns and picket fences.

Near the point where Creek Park and Cutter Mill Park meet, the stream goes underground again at Great Neck Road. The park was acquired by Great Neck Park District in the 1940s. Nearly a half century earlier, a mill stood near this site, dating to the colonial period.

The only image of Cutter Mill that I found online is from the Facebook page of Great Neck Historical Society. There are no details on when it was demolished, but its last owner, Bloodgood Haviland Cutter was a local celebrity in his day. This prolific poet was mentioned by Mark Twain in his book Innocents Abroad. He died in 1906 at age 89 and was buried nearby in Douglaston. He had properties in Great Neck, Little Neck, and Plandome.

The creek runs beneath Great Neck Road for a third of a mile, returning to the surface on the grounds of the Water Authority of Great Neck North, which has a pumping station on the stream bed and the site of Cutter’s Mill. The stream follows the tracks of the Long Island Railroad for a bit as it enters the salt marsh of Udalls Cove on the city line, formed by Gabler’s Creek and this unnamed creek. 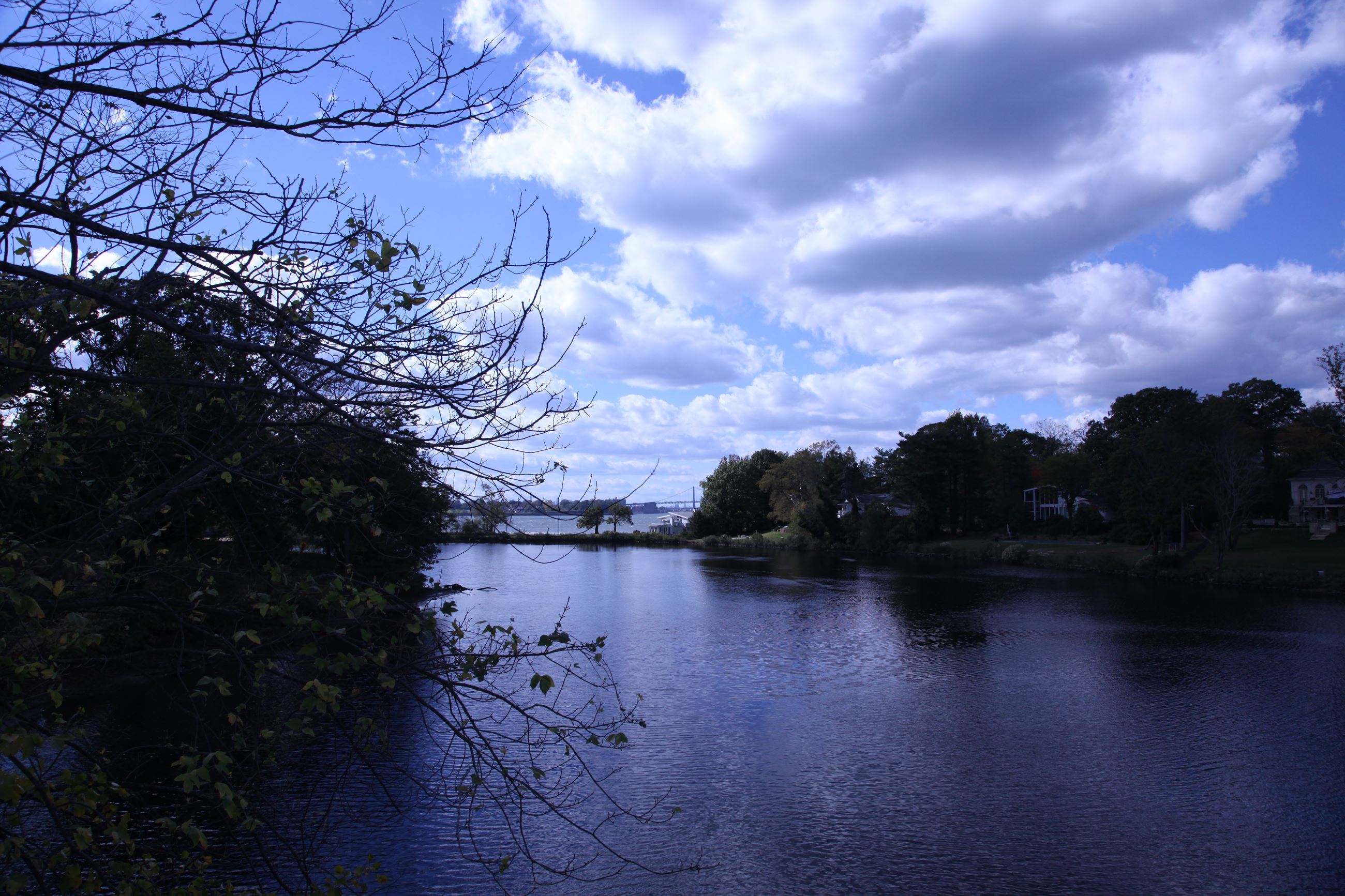 Udalls Millpond is located in the village of Saddle Rock. It is crossed by Bayview Avenue on a bridge that offers an excellent view to the west with Little Neck Bay and the New York City skyline beyond. 9-11 Memorial Bridge is its official name as it was here where village residents saw the Twin Towers burning on the distant horizon. Here, Great Neck residents gather to mourn for the neighbors killed on that day.

The pond’s namesake gristmill dates to around 1700 is maintained by Nassau County as a museum. In 1978, it was added to the National Register of Historic Places.

On the Historical Aerials map, the stream flowing into Udalls Millpond originates in the center of Great Neck at Plymouth Road and Picadilly Road. Likely there was a spring here prior to development. The stream then descends down into a ravine where it is partially underground, flowing beneath mansions and sizable lawns. Brook Lane, a dead-end branching from Old Mill Road, is a reminder of the stream’s presence here. At Bayview Avenue the stream returns to the surface, widens and expands into the millpond.

Mitchell’s Creek has its sources in Kings Point Park, the largest public green space on Great Neck. The 173-acre park belongs to the Village of Kings Point and has been operated by the Great Neck Park District. In 1938 there were plans to use this woodland and swamp as a trash dump. A public outcry resulted in its preservation. On a map its location resembles Central Park as a sizable plot of green space surrounded by private properties. The creek gathers its tributaries in the park and then flows north towards the Long Island Sound. Its prior names were Mill River Creek and Red Brook, the latter name preserved in Redbrook Road that borders Kings Point Park on the north.

Further north towards the tip of Great Neck are Twin Ponds and Wilson’s Pond, the latter named after a landowner from long ago. These ponds are enveloped by sizable private residences, and at the same time preserved in their natural states. Near Wilson’s Pond is 26 Pond Road, the so-called $100 million Gatsby House that exalts Gold Coast opulence in a forested surrounding.