The borough that offers the biggest collection of hidden waterways also has the southernmost point in the state of New York at Conference House Park. Known historically as Ward’s Point, the tip of land where Arthur Kill flows into Raritan Bay has an unnamed brook that shares its location’s superlative as the state’s southernmost stream.

The brook flows entirely within the  park, at its conclusion meeting the sea with views of South Amboy and the hills of Cheesequake State Park. Lovely name.

The map on display at the park visitor’s center shows the various terrains: beach, dunes, coastal meadow, upland forest, and a brackish wetland within the 286-acre park. The unnamed southernmost waterway is the brackish wetland, originating from a drain at Finlay Street at Clermont Avenue and flowing south towards the sea.

At its source, water collected from the nearby streets emerges to the surface beneath a stone embankment reminiscent of the farm boundaries of colonial times. The design is by the city’s Department of Environmental Protection, which manages this and other Bluebelt properties on Staten Island. Old maps of this area show a stream at this location and it never had a name.

As the park map shows, the street grid of the Tottenville neighborhood was designed to expand into the upland forest and brackish wetland of Ward’s Point. fortunately the city chose to expand the park before developers had the chance to build here. Billop Avenue runs straight through the forest as an extension of the grid. It is used only by Parks vehicles. Its namesake is a colonial period family that owned this land. They were loyalists and as a result were forced to leave for Canada after the British army evacuated Staten Island in 1783.

On this road one can see a weir that holds back the unnamed stream, forming a freshwater pond.

Further downstream on a trail where vegetation gives way to sand is a wooden plank crossing the stream, making it the southernmost bridge in the state. There is a symbolic South Pole marker in this park, but it is not on the actual southern tip of the park.

Beyond the water’s edge the city and state are constructing an artificial reef designed to mitigate storm waves. Returning to this park one can visit its namesake building where on Sept. 11, 1776 a peace conference took place between the commander of the British forces in North America and three members of the Continental Congress. The British insisted on complete sovereignty while Congress refused to relinquish its recently-declared independence. 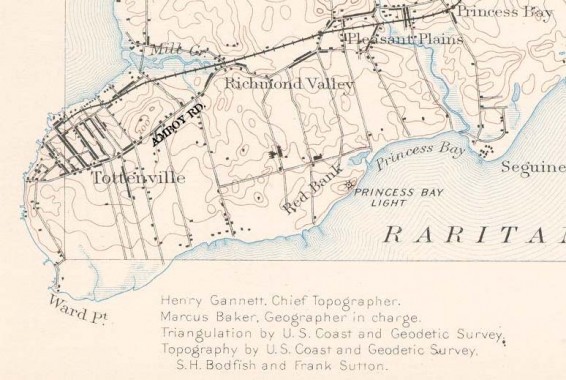 The unnamed stream has the appearance of a constructed Bluebelt waterway, but on the 1891 topographical map we see it on the far left near Ward’s Point. At the time Staten Island was a collection of villages separated by forests, farmland, and streams. It remained that was until the Verrazano Bridge set off a residential development boom. At Princes Bay we see Lemon Creek, which is the most prominent inland stream on the South Shore of Staten Island.

The 1959 aerial survey from the Municipal Archives shows Hylan Boulevard running to the water’s age, where a pavilion provided shade and views of Perth Amboy. The street grid of Tottenville is laid out across the brackish wetland, which has not yet been designated as parkland. This is the tip of New York in the middle of the last century, heavily wooded but still part of New York City.

The biggest example of encroachment on this park was the 1962 plan for Shore Front Parkway. The proposed highway would have stretched from Conference House Park to the Verrazano-Narrows Bridge in a design similar to the Belt Parkway at Gravesend Bay and Cross Island Parkway at Little Neck Bay. That partially completed interchange at West Shore Expressway, Outerbridge Crossing and Korean War Veterans Parkway? It would have continued south to link with Shore Front Parkway. 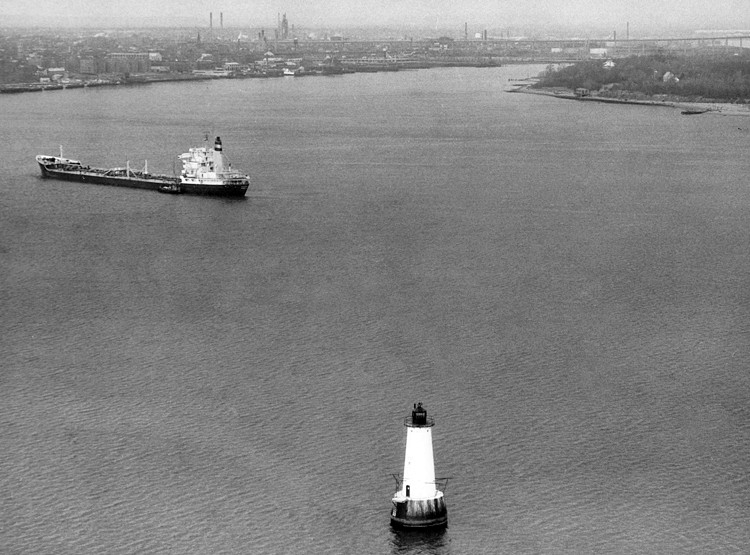 NYC Roads notes that another plan in 1966 would have extended West Shore Expressway across Raritan Bay to Keyport, running above 3.5 miles of water. Along this route, the super-bridge would have run past Great Beds Light, a beacon in the middle of Raritan Bay, but on the New Jersey side of the designated state line. The water here is only 11 feet deep, a phantom island that could trap an oceangoing ship.

To the east of Conference House Park is Mount Loretto with its own set of ponds, and north of this park is Tottenville Shore Park about which I’ve previously written.

City Limits has an opinion piece on the popularity of NYC Ferry in the Bronx.