The neighborhood of Kew Gardens is a mix of historic single-family residences, prewar co-ops, and recent infill condo boxes. It was built atop the glacial knob-and-kettle terrain that made for excellent golfing and contained a set of ponds dating to the last ice age. The largest of these was Crystal Lake. 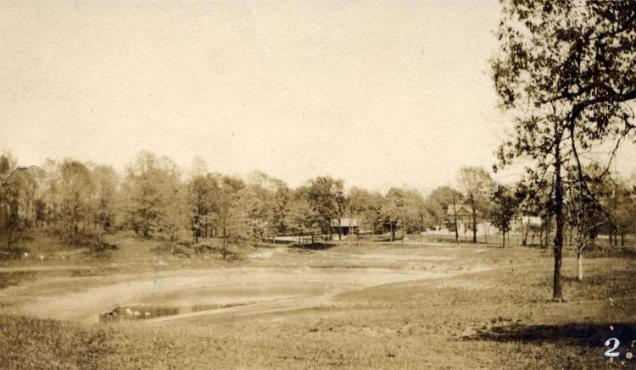 As seen on this 1909 surveyor’s photo, the scene is pastoral but within a year this pond would be filled in favor of a train station that is still there today.

Looking at the 1873 F. W. Beers atlas plate, the community of Richmond Hill was in its infancy, named after an upscale suburb of London. The change in topography at the aptly-named Division (84th) Avenue is the terminal moraine- the ridge marking the southernmost extent of the Pleistocene ice sheet. Land to its north was regarded as too hilly for development and set aside as a golf course, along with Crystal Lake.

The Long Island Railroad’s Main Line initially avoided the pond, running to its north with a station atop the ridge where Kew Gardens Road interests with Lefferts Boulevard. That station was known as Hopedale. In 1875, it was renamed after Maple Grove Cemetery, a 65-acre parcel overlooking the pond. At the time, few people lived in Hopedale and the train station was used primarily by visitors to the cemetery.

On February 17, 1901, the Brooklyn Daily Eagle published a detailed report on Richmond Hill Golf Club, including a map of its fairways. I highlighted the route of the realigned LIRR tracks that would doom the golf course within a decade of this report. The map shows that the course also had a second, smaller pond corresponding to where today’s Beverly road takes a dip between Forest Park and Audley Street. At the time, Audley was Hillside Avenue, not to be confused with the better-known Hillside Avenue a mile to the south, which runs for 11 miles from Richmond Hill to East Williston.

Crystal Lake is marked on the above map as a pond on the sixth fairway. In the corner is Forest Park, a natural woodland situated between Kew Gardens, Forest Hills, and Richmond Hill.

With the extension of the railroad into Manhattan via the tunnels under East River, plans were made to straighten the tracks for high-speed trains. The Man family that owned the golf course, closed it in 1907 and sold land for the new tracks to the railroad. In the summer of 1909 the Kew Gardens station was in service atop the filled Crystal Lake. The old track bed was abandoned and developed with residences. The 1909 G. W. Bromley map shows the old and new tracks alongside each other. Crystal Lake is gone but there’s still plenty of land nearby owned by the Man estate. As Richmond Hill was inspired by a place in London, so was this station’s name, after the Kew Royal Botanical Gardens in that city.

This 1909 postcard of the nearly completed Kew Gardens station shows a train running atop what was Crystal Lake. The station house is still there today, its appearance unchanged. The circular driveway behind it is now a parking lot and there are apartment buildings today among the tall trees of this scene. The addition of express tracks allowed trains from Jamaica to reach Penn Station within 15 minutes, bypassing Kew Gardens.

I visited Kew Gardens in the winter of 2011, with a detailed Forgotten-NY page being the result of that visit.

The Kew Gardens Civic Association also has a detailed site on the neighborhood’s history, including the golf course that once enveloped Crystal Lake.

While you’re there, be sure to visit the neighborhood’s indie movie theater located above the station, pay your respects to Rodney Dangerfield, and ask about my book at the soon-to-open Queens Bookshop.