Ten miles shy of its entry into the Baltic Sea, the Daugava River passes through the city of Riga. Within the borders of Latvia’s capital city, the nation’s great river give up some of its water to bifurcation streams before uniting again and emptying into the sea. Examples include the Mazā Daugava, Bieķengrāvis, Zunds, Sarkandaugava, and Vecdaugava. One branch of the Daugava however is artificial, a former defensive moat, the Pilsētas Kanāls or City Canal.

The canal has a storied history and has seen many battles before its transformation into the city’s version of Central Park.

Following the northward flow of the Daugava, the City Canal splits off at the Central Market, passing beneath the city’s main train station and then winding around the hills of Bastejkalns (Bastion Hill) Park and Kronvalda Park before reuniting with the Daugava at the Andrejosta cove. The island formed by this canal is Vecriga, the Old City of Riga.

The city of Riga was founded in 1201 as a Germanic trading post on the Daugava River that connected its Baltic Sea network of ports with waterways that led upstream towards the Russians, Tatars, and Turks. In the 16th century, the German knights were pushed out by Poland, Sweden and Russia, who had fought continuously over the territory, then known as Livonia. In 1650, Swedish authorities commissioned a defensive moat dug around the city’s walls as they prepared for a Russian invasion.

The Russians succeeded in expelling the Swedes in 1701, leaving the city’s control in the hands of local Baltic German nobles whose families have lived in Latvia since the time of the Crusades. The 1830 map above shows the City Canal wrapping around Old Riga with pointed fortifications designed to hold the city. The construction of forts at Daugavgriva further downstream and the expansion of the Russian Empire into Poland made the Old Riga defenses obsolete.

In 1857, the ramparts were demolished and the hills on which cannons stood were redesigned as a park. Its development was gradual and piecemeal until the arrival of the German-born Georg Kuphaldt in 1880, a prolific landscape architect who could be viewed as Riga’s counterpart to New York’s Olmsted. Kuphaldt’s other works include Arcadian Park, Forest Park, and Vermanes Park. The garden designer was also commissioned for other urban parks throughout the empire, including gardens of the Winter Palace, Oranienbaum, and Tsarskoye Selo in Saint Petersburg, Jurmala, Liepaja, Nizhny Novgorod, Dagomys in Sochi, and numerous noble estates.

Kuphaldt designed winding paths that respected the site’s topography, artificial tributary streams with waterfalls, scenic bridges, along with a practical element- locks on the canal to separate it from the tides of the Daugava River. As the Baltic German nobility remained in control of Riga into the late 19th century, many maps and postcards from that period has German captions. In recognition of the government, the streets crossing the city canal carried imperial names: Nicholas (now Kr. Valdemāra), Alexander (Brivibas) and Suvorov (Barona) streets. 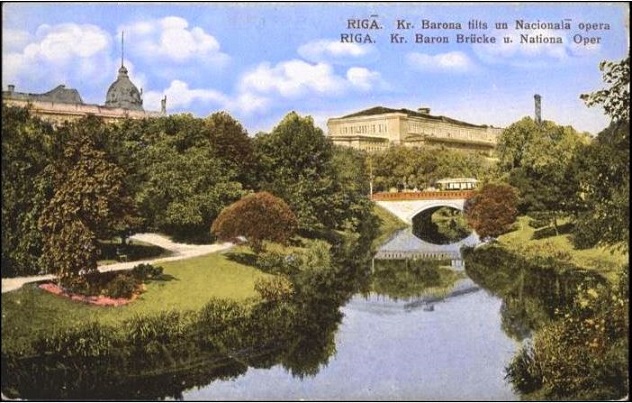 As a centerpiece of the city, it faced the same controversies as other big city parks, whether some of its land should be developed for cultural institutions. Bastejkalns was no exception. It contains the National Opera, National Theater, and departments of Riga University. Within the park there are whimsical pieces of architecture such as a Chinese pagoda gazebo, Japanese-style bird house, lighthouse, and a fountain blasting out of the canal. The section of City Canal that flows through Bastejkalns and Kronvalda parks is navigable for small vessels, including tour boats.

No visit to Riga is complete without a stop at the Freedom Monument, the city’s answer to New York’s Statue of Liberty. Here, the allegorical woman holds three stars symbolizing Latvia’s three historical regions, Vidzeme, Kurzeme and Latgale. 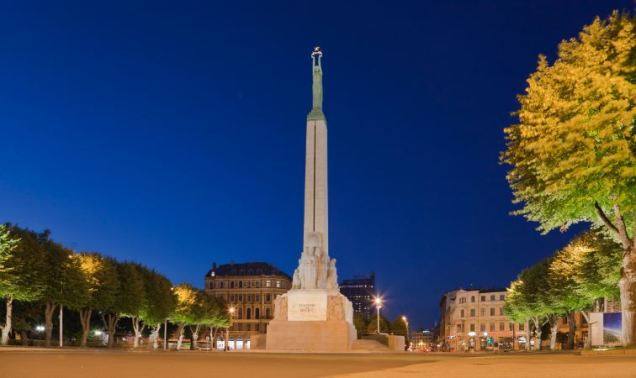 The base of the statue contains the slogan Fatherland and Freedom, along with sculptures relating to the country’s history. It stands at a key entrance into the Old City, where Brivibas (Freedom) Boulevard crosses the City Canal.

In the last years of the Russian Empire, a statue of Peter the Great stood at this site and the boulevard that led to St. Petersburg carried the name of tsars Alexander and later Nicholas. In the past century, Nazi occupiers affixed Hitler’s name to this road and the Soviets renamed it after Lenin. The Freedom Monument was completed in 1935 and remarkably survived the Nazi and Soviet occupations of the country.

As with many hidden urban waterways, City Canal has a tunnel segment. At the intersection of January 13 Street, Gogol Street, and Raina Boulevard, the canal is covered by streets, a shopping center and railway tracks leading into the Central Station. It is a busy part of the city where the centerpiece of a park is relegated to sewer status.

In the Google Street View above, the canal is on the far right, with the Stockmann department store (red banner) straddling the stream. The sidewalk stairs on the right do not lead into a subway. They are part of a pedestrian passage beneath the intersection. Although there were plans for a subway in Riga in the 1980s, for now, the network of trolleybuses, streetcars, buses, and commuter rail suffice. 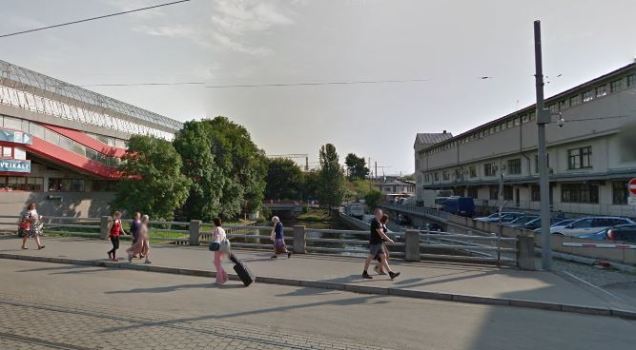 The City Canal returns to the surface near Pragas (Prague) Street, where trolley tracks encased in cobblestone cross the stream. To the right above is the Riga Central Market, a historic collection of vaulted structures constructed in the 1920s using recycled German zeppelin hangars.

The City Canal flows past the market’s iconic arches, unused and teeming with lilies. In its early years, the market had a dedicated rail spur and the canal embankment appears to be designed for use as a dock. This section of the canal carries the name Karla Baseins, of Carl’s Pool, after the Swedish king who ruled during the canal’s construction. 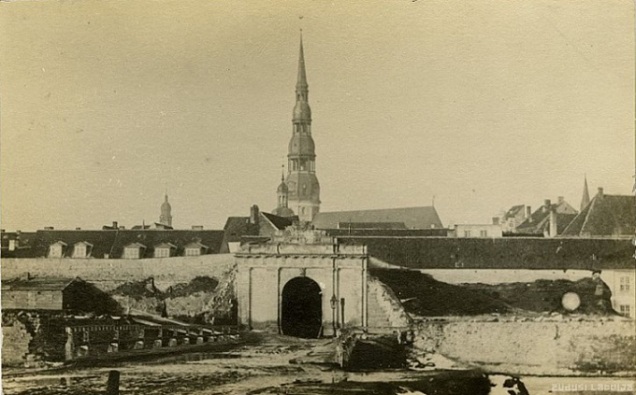 Through Latvia National Library‘s online Lost Latvia exhibit, we can go back to 1863, when a remnant of the city wall stood along January 13 Street, originally called Charles Street. Prague Street entered the Old City through Charles Gate. In this photo we see City canal passing in front of the gate, beneath Prague Street. In the 1860s, the former wall was transformed into an embankment that carries the main line of the Latvian railroad. As with this photo, the title photo at the top of this article also comes from the Lost Latvia collection.

The date January 13 that appears on a prominent Riga street commemorates the day in 1905 when Latvian workers and peasants marched on the capital. Although the insurrection was unsuccessful, it inspired nationalists and communists throughout the empire. 12 years later, the Romanov dynasty was deposed and Latvia was fighting for its independence.

The last two roads that cross the canal just shy of the Daugava River as Maskavas (Moscow) Street and Krasta (Coastal) Street closer to the water’s edge. The former is an ancient roadway that follows the Daugava upstream through the Maskavas Forštate neighborhood, historically home to ethnic Russians and the Jewish ghetto, slang for “poor district.” It leaves the city as route A6 on its way to Moscow.

The latter is a highway that parallels Maskavas Street within the borders of Riga, similar to how Long Island Expressway parallels the ancient Booth Memorial Avenue in Queens. Further in the background are the arches of the iconic Railway Bridge, which I crossed numerous times as a child. The second railway bridge at this location, it was completed in 1914 and suffered damage in both world wars. Invading German troops, Jewish holocaust victims, Soviet Latvian deportees, commuters, vacationers, refugees. All were aboard the trains that crossed this bridge.

Although my home is New York and my allegiance is entirely to the United States, my nostalgia for my birthplace has never departed. It was the hidden waterways of Riga that inspired my to write Hidden Waters of New York City. If the Parks Department in Riga is hiring, I would gladly give it a thought.

Times Ledger of Queens reports on the bald eagle ‘s return to Meadow Lake in Queens.

Staten Island Advance takes a before and after look at Fresh Kills Park.