In contrast to the uninterrupted stretches of parkland on the South Shore of Staten Island, the more urbanized North Shore is still very much a working waterfront with little available space for parkland on the water’s edge. With the current city administration working to address inequality in the distribution of parks, the Nov. 26 ribbon cutting at Richmond Terrace Park opened up a new public green space on the Kill Van Kull.

The park offers views of the waterfront that were previously blocked off to local residents. From this park, one can look north towards Newark Bay, northwest at Shooters Island, and see the hulking remnants of ships rusting away at this historically industrial stretch of Kill Van Kull.

The 11-acre park occupies a thin sliver of land along Richmond Terrace between Van Pelt and Van Name streets. At its western entrance is an overlook pier, and the eastern entrance offers a sitting area for outdoors classes. Between the two entrances is a path winding between the trees. To the east of the park is the Great Lakes Dredge & Dock Corporation, which maintains the depths of Kull Van Kull and Arthur Kill that are necessary for oceangoing freight ships. On the park’s western side is the local office of Caldwell Marine, which constructs and repairs underwater cables, pipelines, and offshore windmills. Why should this stretch of waterfront have a park? Because across Richmond Terrace are dozens of residences. This park is for them.

The winding footpath gives local residents a place for a quiet stroll in a verdant setting that is rare on this side of the island. By design the park is “floodable” in the same manner as Hunters Point South in Queens- a green landscape that serves as a buffer between the sometimes angry sea and the crowded city.

Looking directly north from the park’s pier one is looking at Newark Bay, the busy international seaport that serves the metropolitan region and the state of New Jersey.

Once ringed by tidal wetlands, most its shoreline today is concrete bulkheads lined with cranes to unload containers. Its main sources of inflow are the Passaic and Hackensack Rivers. Newark Bay was designated as a seaport after plans for a Jamaica Bay port were rejected by city and state leaders.

Looking at a 1915 New York Times illustration map of Newark Bay, we see its advantages over New York Bay and Jamaica Bay. It lies on the mainland, connected directly to railroad lines going to points west. Manhattan and western Brooklyn were nearly entirely lined with finger-like piers to receive international freight, but by the end of the century most of them will either collapse into the water or become repurposed as parks. Newark Bay remains a seaport, the third largest in the country.

At the point where Newark Bay meets Arthur Kill and Kill Van Kull is Shooters Island, which can be seen from the western side of Richmond Terrace Park. It is one of only two places in NYC that has a land border with New Jersey, the other being Ellis Island. The island is shared by three cities: Bayonne, Newark, and NYC. Not a single person lives on this hunting preserve-turned-shipbuilding factory-turned bird sanctuary. More than two-thirds of the island is in NYC, a park that is off-limits to the public. Richmond Terrace Park gives the public an opportunity to see Shooters Island from a distance.

Fro travelers on Richmond Terrace the park is easy to miss, or dismiss as an undeveloped forested lot. That’s the way it has been for decades while owned by the city, akin to Tottenville Shore Park that I documented earlier on this blog. From this park one can also see Bayonne Bridge, whose deck was raised in 2017 by 60 feet to enable New Panamax ships to make the clearance.

In 1924 Staten Island historian  and naturalist William T. Davis photographed the homes on the southern side of Richmond Terrace opposite the site of this park.

He described these homes as “Captains’ Row,” built by some of Staten Island’s leading oystermen. By the time that Davis took these photos, the oyster industry in the city’s waterways was dead, banned by the state on account of excessive pollution. In recent years oysters found a new purpose in the city’s harbor as living reefs that filter the water for pollutants. Landscape architect Kate Orff is the authority on this matter.

The 1910 topographical map of Staten Island shows the site of Richmond Terrace Park with a handful of residences on the water’s edge and piers on either side of the future park. As the North Shore became more industrial, the mansions lost their value and most of them were eventually demolished. A block west from the park, 2868 and 2876 Richmond Terrace stand as remnants of a much longer row of Victorian waterfront mansions. 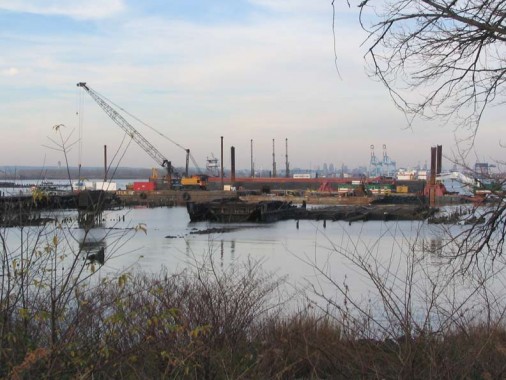 As roads on Staten Island are concerned, Richmond Terrace is among the longest and most fascinating as it runs from the St. George ferry terminal to Howland Hook.

In 2006, Kevin Walsh walked the length of Richmond Terrace, documenting its forgotten historical aspects. Along the way, he stopped at the site of this park, not knowing of its future. His photo shows us Port Newark and the control tower of Newark-Liberty Airport.

Also on the North Shore

The winding waterside road includes a couple more North Shore waterfront green spaces that I’ve documented: Faber Park and Heritage Park. One more park on this shoreline is Mariners Marsh Park, a nature preserve on a former iron foundry and shipyard. Kevin was there in 2003.

Kevin’s “Rime of the Ancient Mariner” is poised for a remix, as the city is working on a master plan to open this park to the public with trails, sports facilities, and viewing platforms. The park has its own set of ponds that could keep me busy with this blog. For now, I’m not ready to travel out there.