In the Brooklyn neighborhood of Sheepshead Bay, one grid-defiant road runs askew to the grid, connecting Gravesend Neck Road to the bay. Its route follows an obscure stream that used to cause flooding in the area.

As seen in this 1933 photo from the NYPL Digital Collections, a heavy downpour brought Squan Creek back to the surface. Above is the intersection of East 11th Street and Avenue Y where the creek’s course flowed until the early 20th century as urbanization covered the stream.

Please forgive the low resolution. On this 1890 map, southern Brooklyn was still the Town of Gravesend. Coney Island Creek flowed in its entirety between Gravesend Bay and Sheepshead Bay. The arrows point to two of its tributaries: Hubbards Creek and Squan Creek, with Sheepshead Bay Road highlighted.

To the east of Sheepshead Bay is Plumb Island, with Hog Creek that I documented earlier. Further east is Gerritsen Creek that flows through today’s Marine Park. The flat terrain and salt hay made the area attractive to horse racing circuits, tow of which appear on this map. At the time, the area had its beach resorts and train lines connecting downtown Brooklyn with the seashore. Today, these lines are part of the city’s subway system.

Elisha Robinson’s map of Gravesend from 1890 shows Stryker Basin, Stillwell Basin, Gravesend Basin, and Harway Basin (fed by Hubbard Creek) extending on the north side of Coney Island Creek, which was intended to be straightened as Gravesend Ship Canal. Stryker Basin, named after a local landowning family, would have straightened and widened Squan Creek under this new name. The city’s Board of Estimate cancelled this plan in 1908.

For reference, I highlighted (right to left) Coney Island Avenue, Ocean Parkway, McDonald Avenue, and Stillwell Avenue. Near the top of the map is the historic core of Gravesend, founded in 1645. All the peach-colored grid streets had not yet been built.

By 1929 the creek was entirely gone from the surface except in times of heavy flooding. On this 1929 G. W. Bromley survey we see empty space on the former course of the stream.

The X on the map is my cousin’s house, whose living room wall faces Sheepshead Bay Road, with its angled corner.

Circled in orange are two dead-ends: Desmond court and Doone Court, which dead-ended at the creek. Today, a piece of Homecrest Avenue runs atop the former stream between Desmond Court and Avenue Y. The neighborhood of Sheepshead Bay has nearly a dozen such dead-ends, all named “court.” The red circle on Avenue Y and East 11th Street is where the title photo took place with the bus pushing through flood water.

From Eric J. Ierardi’s book Gravesend, Brooklyn, we have another image of the stream’s course: Avenue Y at Sheepshead Bay Road looking west in 1922. The road has not yet been paved and we see the effect of flooding in making it nearly impassable. This undeveloped block lies atop the former course of Squan Creek.

Continuing downstream along the former course, on the 1929 map it appears as a property line on an undeveloped half a block south of Avenue Y. The exception here is Margaret Court, a pedestrian-only dead-end on Homecrest Avenue.

The final piece of the 1929 map showing Squan Creek is its confluence with Coney Island Creek at the present-day corner of Guider Avenue and East 12th Street, just shy of Neptune Avenue and the tracks carrying the Brighton Line.

At this time the section of Coney Island Creek here had been filled with Guider Avenue laid atop the course. Voorhies Avenue will be partially transformed in 1940 becoming the service road for Belt Parkway, running between the two red lines that I added here. Circled in orange are two alleys, Koster court (which is still there today), and Jenks Court. The neighborhood here is Brighton Beach, which is filled with alleys that have their own addresses. 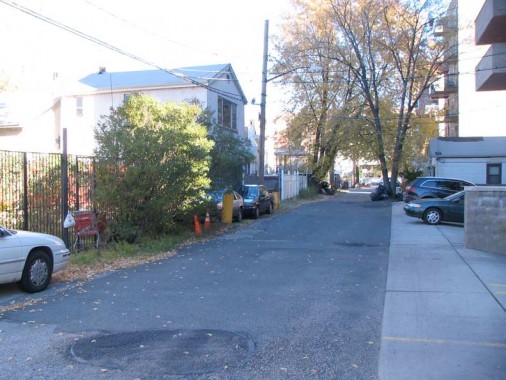 Kevin Walsh visited Koster Court in 2010 (above) and since then some of the houses on it have been replaced with apartment towers. I’m not sure is this is private street but it has that look based on its width and lack of sidewalks.

The Roaring Twenties erased both creeks during a period of rapid development in Sheepshead Bay and Brighton Beach. In the 1924 city aerial survey, I circled the remaining portions of Squan and Coney Island Creeks, both of which will be gone by decade’s end. Also circled are Desmond, Doone, and Margaret Courts. By the 1940s, they will be enveloped by tract housing and grid-compliant streets. There were still a couple dozen farm fields here at the time.

The next series of aerial surveys for Squan Creek took place in January 1940 when the city was scouting sites of a playground in this area. The stream is gone but its course remains undeveloped and the three dead-ends still point towards its former course. The X is my cousin’s home, an apartment building that was built around 1950. On the far right is the Brighton Line, a former railroad that was absorbed into the subway system.

The initially proposed site for Homecrest Playground was on Avenue Y between East 12th and East 13th Streets, atop the former stream. At the time the area looked suburban as tract houses shared blocks with farm fields. Desmond and Doone Courts are on this block, but not marked.

The site of the confluence in 1940 is approximately at the triangle on the bottom of this aerial shot from the Municipal Archives. It carries the name Schloss Triangle, in memory of local civic activist Irving Schloss. The triangle is bound by Neptune Avenue, East 12th Street, and the diagonal route of Guider Avenue. The park at the head of Sheepshead Bay later became a holocaust memorial site.

The eventual site of Homecrest Playground is the green rectangle, and Margaret Court is circled in orange. The path for Belt Parkway is outlined. When the highway was built, East 12th Street was given a bridge to connect neighborhoods on either side.

The largest public open space along the former course of Squan Creek is the 2.37-acre Homecrest Playground, which opened in 1942. The property was acquired by the city as part of the route for Belt Parkway.

Extra land along the route was designated as parkland, including this playground. The actual course of Squan Creek was where the apartments stand in this photo. For now most of the playground is a paved surface but as the city expands its resiliency programs, perhaps in the near future rainwater in this park will drain directly into the ground, where Squan Creek used to flow.

Although they mention Squan Creek in passing there are two good books on the neighborhood that write about its development form a fishing village into an urban community. Brian Merlis and Lee A. Rosenzweig’s Brooklyn’s Gold Coast is authoritative, and Eric J. Ierardi’s book offers historical photos and postcards.

As the neighborhood was part of the former Town of Gravesend, I also look to historian Joseph Ditta as my go-to source on all things southern Brooklyn.

WPIX reports on the progress of Bushwick Inlet Park.

NBC New York reports on the beaver spotted in the Hudson River near Upper West Side.