The name of the Kenyan capital city comes from the Maasai word for “place of cool waters,” in reference to the city’s namesake creek. Nairobi is located on a gently sloping plain that is high enough not to have malaria-causing mosquitoes, and roughly midway between the seaport city of Mombasa and the vast Lake Victoria on the other side of Kenya. At the turn of the 20th century, British colonial authorities set up a railroad deport at the “place of cool waters,” which in 1905 became the capital of British East Africa. 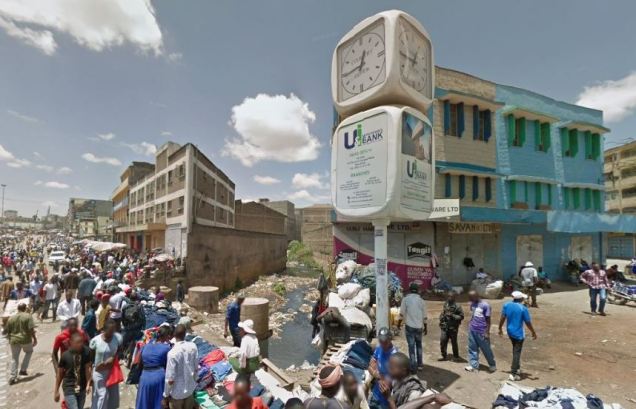 But as the city has grown, its infrastructure failed to keep up, resulting in massive sewage releases into the Nairobi River, along with chemicals and trash that have choked its flow, killed wildlife and posing a health hazard to people living and working along its course. The crowded scene above is at Pumwani Road, to the east of Nairobi’s Central Business District. 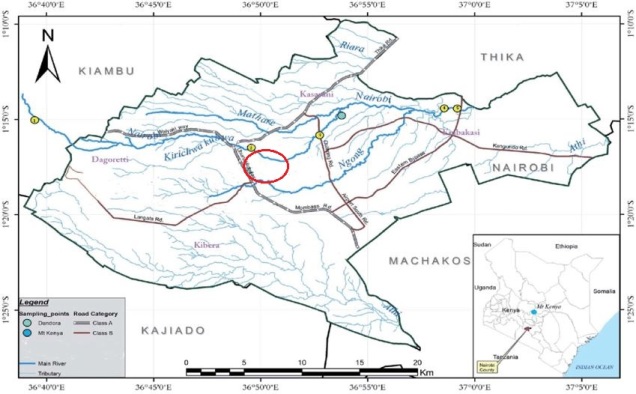 Looking at a basin map within the Nairobi municipality, we see dozens of urban streams paralleling and then joining Nairobi River as it flows east. The circled area is the city’s Central Business District. Most of the city’s slums are to its east, but in truth the entire course within the city has been subject to pollution in the past half century.

The 1930s map and guide to the city published by The East African Standard Limited shows the planned city with a European imprint of a racecourse, three golf courses, street grids, with nearly all of them having British names. Colonial Nairobi was a segregated city with designated neighborhoods for colonists, natives, and Indians. All of the businesses advertised on this map are European-owned. 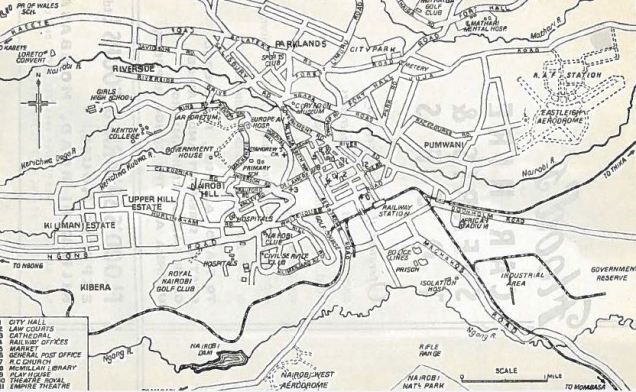 A map from 1962, the year before Kenya became independent, shows a closer view of the city center, with plenty of open space along the river’s course. On the south side of Nairobi, the Ngong tributary has a reservoir that provided water to Nairobi. Today this reservoir is unusable, polluted and choked with invasive plants. 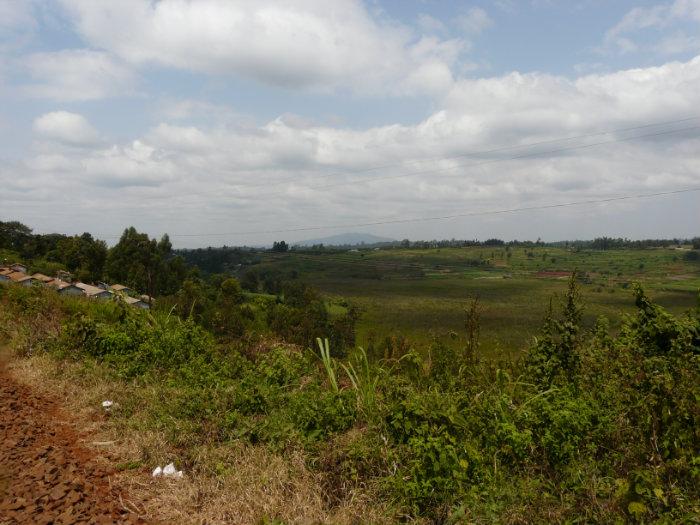 The source of the Nairobi River is Ondiri Swamp, located nearly 13 miles to the east of central Nairobi. Formerly a lake, it became a swamp as deforestation and erosion resulted in plants overrunning the lake, transforming it into a floating peat bed, the only one of its kind in Kenya.

Leaving its source, the river flows through a ravine past villages amidst dense vegetation. At Naivasha Road the stream has a natural appearance but urbanization is closing in on either side of the ravine in the Dagoretti and Mountain View neighborhoods. The former sounds Italian, but it is either a corruption of Kikuyu for “great corner” or  a mispronunciation of ndagurite: “he has not bought it,” in reference to a colonial land dispute.

As it approaches the city, the sight of plastic bags, water bottles, and other non-biodegradable waste becomes unavoidable. The scene above is at James Gichuru Road, named after the Minister of Finance in the years following independence. The Benhard Estate section of the city is regarded as upscale, and the condition of the river progressively worsens as it continues downstream.

In the city center the river flows through the city’s botanical garden, John Michuki Memorial Park and the Globe Cinema Roundabout, which is topped by an elevated highway. These three parks are recent additions to the map. The botanical garden was completed in 1995 as part of Nairobi National Museum. The garden contains plants from eleven themes representing the country’a biodiversity.

Adjacent to it, John Michuki Memorial Park honors a former environment minister who dreamed of fish returning to the city’s namesake stream. The cleanup began in 2009, with three million metric tons of waste cleaned here, along with the removal of slum dwellings.

It was designated for parkland by Prime Minister Raila Odinga in 2012, and funded by private donations. But as long as there’s pollution entering the river at points upstream, the botanical garden and park have yet to experience the river as their common centerpiece. Downstream from the park there are other slum communities where runoff and trash ends up in the stream. On the map, the setup is reminiscent of Bronx River, which flowed out of the naturalistic Bronx Park into a landscape of concrete factories, scrap yards, and repair shops. Since the turn of millennium, new parks along that stretch have extended the renewed green banks of the river almost entirely along its course within New York City. 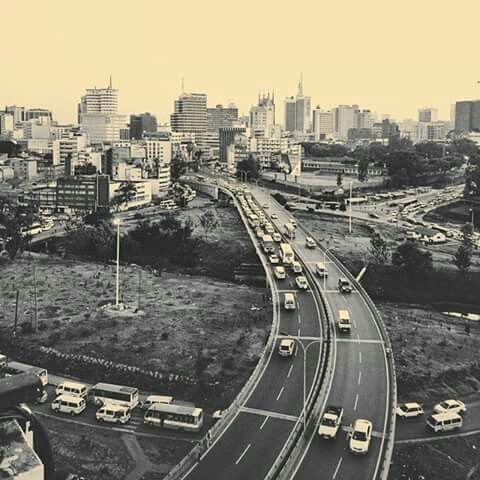 The Globe Cinema Roundabout is a former parking lot transformed into open space bisected by the river. Not much to see here other than an elevated highway running atop the circle as a congestion reduction solution, and a public restroom for drivers. That facility is a big deal here. Prior to its construction, many drivers had no reservations about relieving themselves at the river.

The former Globe Cinema is across the road from the rest stop. It is today a church, but its name is a throwback to British rule. Perhaps to the legendary Globe Theater of London associated with William Shakespeare’s plays. Downstream from this traffic circle the river passes by bus storage yards, outdoor markets, and slum communities where one can see the river choking in trash.

That’s the scene of Nairobi River at Pumwani Road, where it appears as an afterthought tucked behind buildings and flowing beneath the streets. Sights such as this inspired the government to take drastic action. In August 2017, Kenya was the first country to ban plastic bags, which were ubiquitous in the stream. Penalties for possessing the offending polyethylene items: up to four years’ imprisonment or fines of $40,000. Nearly as draconian as the fines for chewing gum in Singapore. The campaign to ban single-use plastic items in Kenya began with Nairobi River, so it could be called the “river that banned plastic.” But for now, there’s much cleaning to be done before the river itself is free of this offending material. Factories along the stream have also been ordered shut for pouring waste into the river. 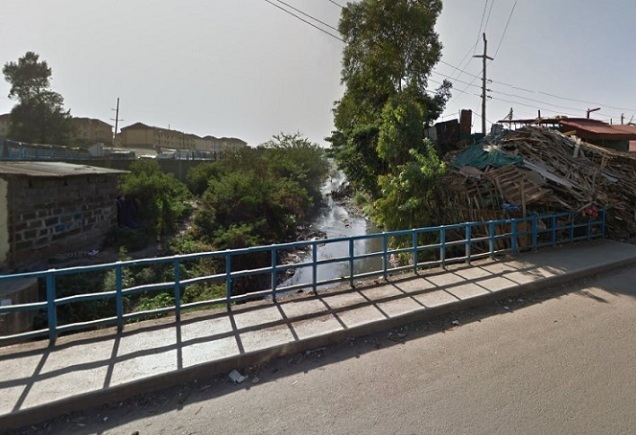 As seen at Eastleigh First Avenue, there’s is little space for the river to flow between the crowded neighborhoods. Besides trash, runoff, and medical waste, the river also turned up macabre finds. In a May 2019 cleanup operation, 14 bodies were found in the river, most of them babies, with one still breathing but dead upon arrival at the hospital. In the same months, two dead twin infants were also found in the river, tied inside a plastic bag.

Further downstream are two sewage treatment plants that were built to reduce polluted runoff flowing into the river. The river leaves the city and flows through grassland, where it meets the Athi River, which then flows into the Galana River. It meets the Indian Ocean near the beach city of Malindi, nearly 350 miles downstream from the Globe Cinema Roundabout in the center of Nairobi.

The city has more than a dozen other hidden waterways that could make for a book, and I would welcome the opportunity to follow their courses and document their conditions.

My connections to Africa are thin. In journalism school, I did my capstone project on Togolese immigrants in New York. Theirs is a developing and stable country on the west coast, and the capital city has a lagoon. My high school friend Charlotte Meyhoefer did missionary work in Uganda whose capital has a few creeks flowing through it. For Kenya, my classmate Gabrielle left the comfort of Brooklyn to start a school in the Likoni section of Mombasa. This admirable humanitarian initiative that provides high school scholarships, mentoring, and career guidance to low-income Kenyan students. She would be my likely connection to this country.

Nairobi is my second sub-Saharan example of an urban stream. If you like this essay, read about Rio Seco in Luanda, Angola.

The Morning Journal reports on funding shortfall for the restoration of Black River in Lorain, Ohio.

Wilton Bulletin reports on the restoration of fish habitat in Norwalk River in southwest Connecticut.