The northeastern tip of the Bronx is where one finds the city’s biggest city-operated park. With 2,772 acres Pelham Bay Park is three times the size of Central Park. The most visited portion of the park is Orchard Beach, the crescent-shaped beach framed by the hilly nature preserves of Hunter and Twin islands. 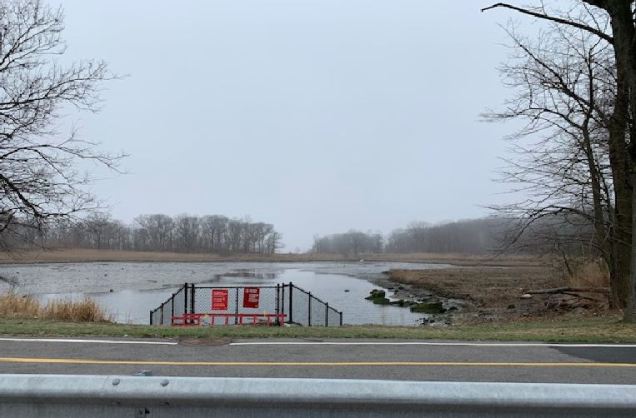 Having previously written about the lagoon that separates the beach from the rest of the park, there’s also Turtle Cove, a smaller nature preserve inside the park. It is framed by three of the park’s internal roads and a forest.

On the NYC Parks GIS map of the area, we see Turtle Cove as two ponds framed by Orchard Beach Road on its north and City Island Road on its south, both roads running on thin necks of land separating Turtle Cove from Pelham Bay Lagoon and Eastchester Bay. The cove is a tidal inlet that is full with high tide and mostly dry when the tide is out. It serves as a wetland habitat where fresh and salt water mixes, a calm environment for wildlife.

One curiosity in this landscape of ponds and marshes is the nature trail bisecting the cove into two ponds. It runs atop an embankment with a bridge in the middle. It has the look of a demapped road, or perhaps there’s a pipeline running underneath the trail. A look into the past offers clues on this trail’s appearance. 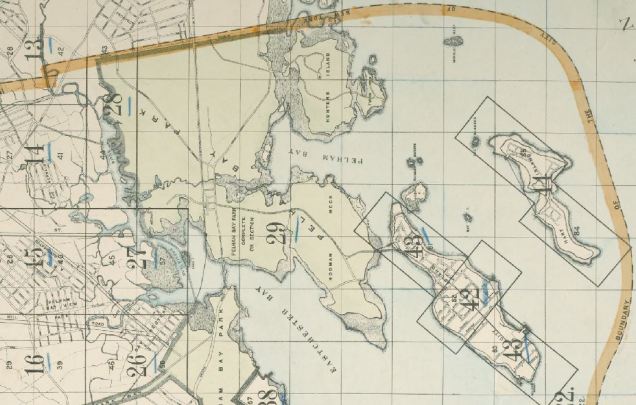 Looking at the 1905 Sanborn map of Pelham Bay Park, we see Turtle Cove unmarked at number 29, with the road to City Island running to its north. At the time Rodman Neck contained a sizable bungalow community and a few mansions dating to colonial times and the early 19th century. City Island is an urban community that resembles a New England fishing village, connected to mainland Bronx by a single bridge. What this map does not show is that from 1910 to 1914 City Island also had a unique monorail that ran between City Island Bridge and the Bartow station. 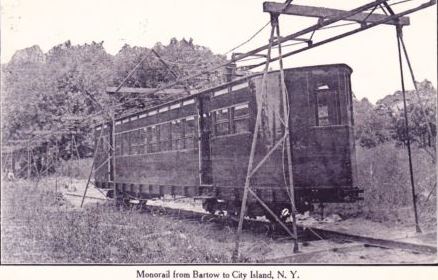 In this 1910 postcard we see the single car monorail running on a dedicated route through Pelham Bay Park. The Bartow station on the Pelham line had trains that ran to Manhattan and points north, offering a two-train ride for City Islanders traveling to the city and Connecticut. The unusual cars of the Pelham Park Railroad company were supported by brackets above while running on rails below, with an overhead power line to run the trains. The Bowery Boys history blog describes the short-lived monorail as “easily the worst ride in NYC.” On its inaugural run on July 17, 1910, piloted by inventor Howard Hansel Tunis with 100 passengers, the train tipped over. In 1919 the line was abandoned in favor of a trolley on City Island Avenue that later became the Bx29 bus route.

Being so obscure in the city’s overall transit history, few maps and diagrams exist today of this two-station transit system. One possible answer appears on the map made in 1944 by the Electric Railroads’ Association that appeared in the 1995 New York Division Bulletin published by the Electric Railroaders’ Association. The rail line runs parallel to City Island Road, but did it run across Turtle Cove? Based on this map, I would say inconclusive. 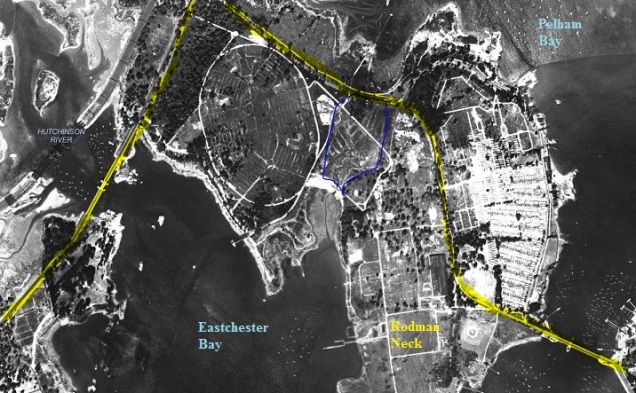 In the first aerial survey commissioned by the city in 1924, I circled Turtle Cove in blue and highlighted the road to City Island. Although all of the land here has been city parkland since 1888, there are traces here of the past when Rodman Neck was occupied by wealthy estates. On the far right was a bungalow colony that stood into the late 1930s. The oval path seen here was Tent City, a summer community that operated through 1937. The site has since been developed as Turtle Cove Golf Center and reforested land.

In 1934 under Parks Commissioner Robert Moses, the park was greatly altered with the condemnation of the bungalow colony, filling of Pelham Bay for the parking lot, beach, and playground, and other athletic facilities. At Turtle Cove, there was draining and topsoil depositing in 1934, as seen in this photo from Municipal Archives.

The city’s 1937 plan for the park envisioned the police vacating Rodman Neck, with their firearms training facility replaced with a sizable lawn and boat basin. Turtle Cove and the lagoon would have been part of an inlet separating the landmass of Rodman Neck, Orchard Beach, and Hunter Island, from the rest of the park. Twin Islands was to remain separate from the beach. It will be connected to the beach in 1947.

An aerial survey of Pelham Bay Park from 1937 shows the wetland of Turtle Cove assuming its present borders. The path bisecting the wetland is still there today as a hiking trail.

In reality the inlet was not carved out, but a culvert beneath City Island Road connects Turtle cove to Eastchester Bay. Between the park and the former landfill in the background Hutchinson River also empties into this bay. In 2010, the periphery of Turtle Cove received new trees in a reforestation project co-sponsored by NYRP, Home Depot, and Toyota. 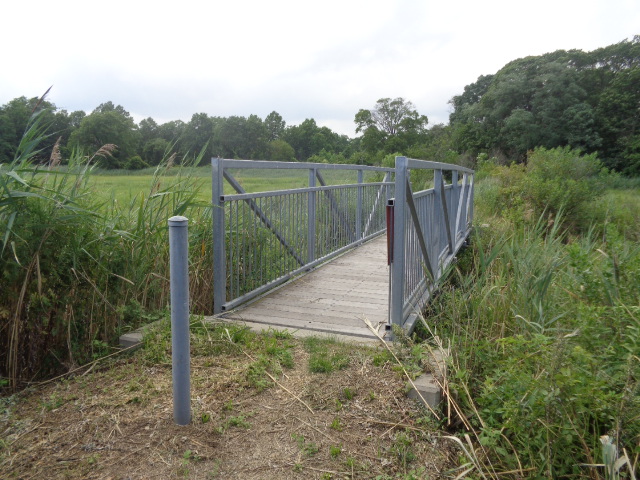 Turtle Cove provides a place to walk in the middle of a waterway, with scenery that appears as un-urban as possible without leaving the city.

On the mainland Bronx section of the park closest to the subway is a miniature wetland that is on the grounds of Playground for All Children. There’s at least one in each borough, designed to accommodate children with disabilities. This park’s playground features a boardwalk ringing a wetland. This waterway could use a restoration with more native plants added and informative signs. Its last major reconstruction was in 2000. 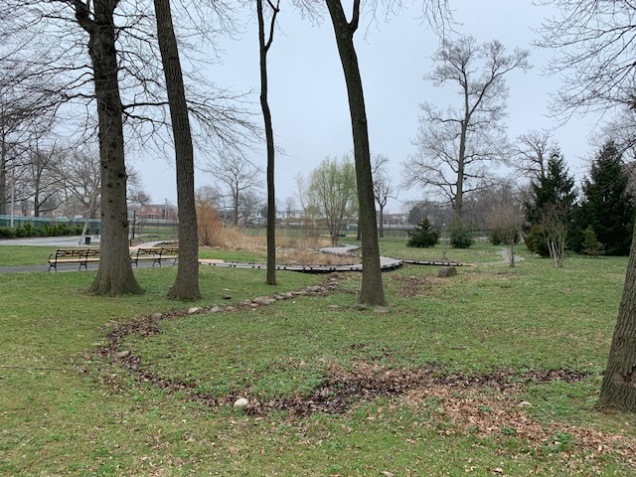 In a design resembling Montreal’s Pratt Park, there’s a constructed brook flowing into this wetland. On my visit to this wetland, I did not see water in the brook nor a source for the water, such as a pipe or spring hidden inside rocks. The accessible playground on Staten Island, Jennifer’s Playground in Graniteville, also has its own miniature stream.

Utah Public Radio reports on the use of beavers and beaver-made dams in restored streams.

One thought on “Turtle Cove, Bronx”