In the southern French region of Occitanie, the second largest city is Montpellier, located near the Mediterranean coast. Running through the city is a graffiti-covered concrete channel carrying the Verdanson River. 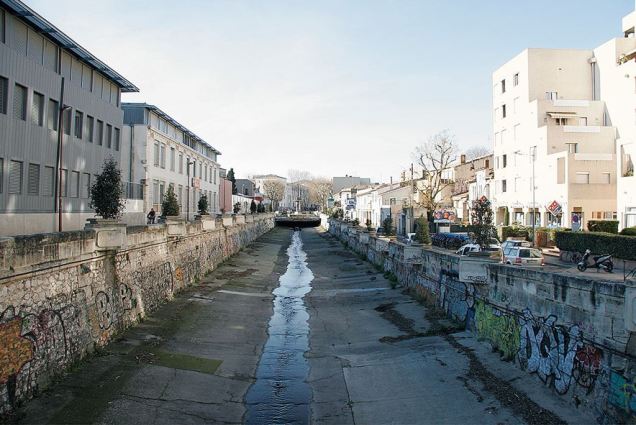 Like the Los Angeles River, this concrete course sees only a trickle for much of the year, but when it rains it pours, and fills up nearly the entire basin with a torrent rushing to the sea. 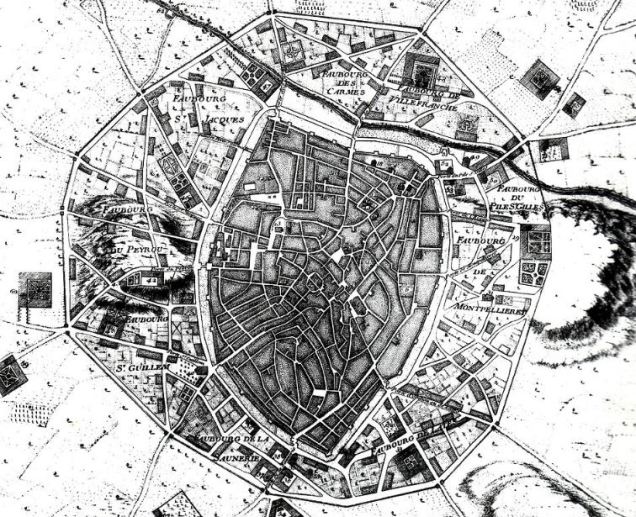 This 1737 map of Montpellier gives the city the appearance of a human heart. As a defense against invaders and rebels, the urban core was ringed by a wall and moat, with the faubourgs (suburb) communities lying outside the wall. The Verdanson flows to the north of this urban core.

From the Montpellier City Hall’s site, there is an online map collection that includes an 1825 map showing the city expanding closer to the Verdanson. At that point, the medieval wall and moat were gone. During the French Revolution and Napoleonic wars, the city was spared from much of the violence. In the 1860s the Verdanson was “canalized” in order to reduce the flooding that it wreaked on the surrounding neighborhoods. 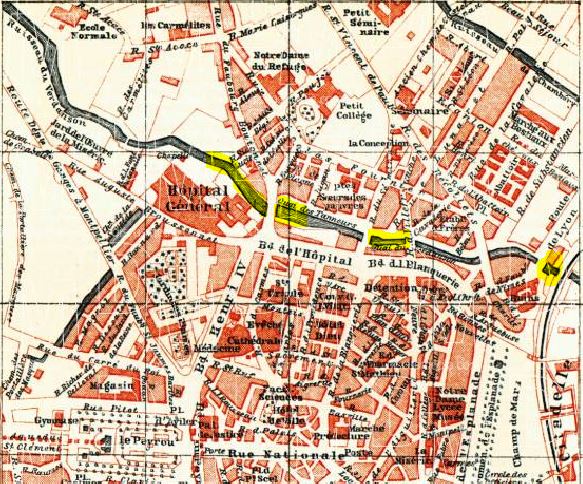 By 1885 the stream’s present shape had taken form, with the highlighted sections above covered by widened streets shortly after this map was produced.

Relying on maps and online reviews, the furthest source of the Verdanson appears to be an open field in Grabels, nearly seven kilometers from the Verdandon’s confluence with the larger Lez River. Its headwaters are hidden among the bushes and its first couple of kilometers are barely visible.

An example of the Verdanson’s barely-here presence is on the rue de la Croix de Lavit on the edge of Montpellier, where recently built apartments have wide sidewalks and a few spaces where the water can be seen flowing under the street. In this neighborhood, there’s an unrelated but notable water feature: the St. Clement Aqueduct, with its Roman-inspired arches. Constructed in 1772, it today functions as a 14-kilometer linear park akin to the Aqueduct Walk in the Bronx. On the campus of the Hospital Arnaud-De-Villeneuve, the stream could be daylighted between its parking lots and buildings. The Verdanson reveals itself after leaving the hospital, flowing through a narrow ravine.

At Avenue Chancel near the Philippides Stadium, the Verdanson enters the concrete channel that defines its for the rest of its course.

Where Avenue Saint Charles and Avenue Boisson Bertrand Merge into the Quai des Tanneurs, the stream goes underground for a quarter kilometer. Streetcar tracks run atop the covered stream in this neighborhood. As the street’s name suggests, this part of the course used to be lined with tanneries that polluted the water with runoff. It was terrible enough that for a time locals derisively called this stream Merdanson, a pun employing the French term for shit. 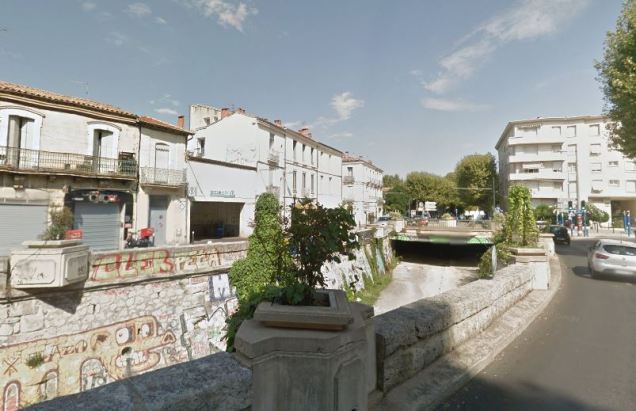 The stream emerges as a median trench on some blocks and goes underground on others. As one travels downstream, the graffiti tags turn to slabs, intensifying in color and detail.

When one looks at the Verdanson during the summer, it is barely a trickle and hardly worth daylighting. Some have proposed repurposing this trench as a bike trail in the dry season. But when it floods, it’s huge. 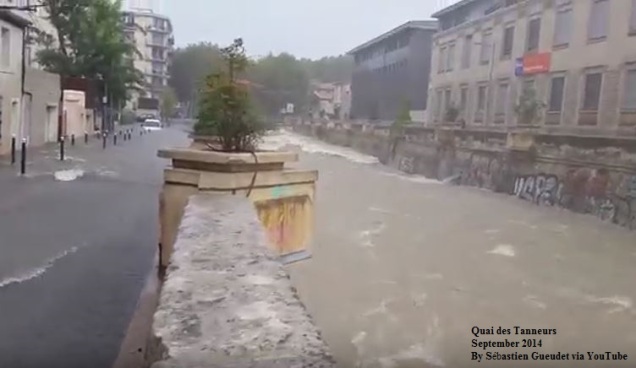 Like a snowy day in Jerusalem, a flash flood on the Verdanson brings out the filmmakers and photographers recording the unusual sight of water rushing through the city, sometimes overflowing onto the streets.

The city has a flood prevention master plan for the Verdanson, seeking to expand resilient landscaping and street design, and regulate the flow of the water.

Google Maps user Jean Mermoz found his way down to the trench and photographed one its more colorful murals, an ape-like undead pirate staring at the summer trickle that is the Verdanson. Perhaps the longest linear display of graffiti since the Berlin Wall, these tags and slabs have made the river an attraction for artists and tourists, akin to the 5 Pointz of Queens prior to its demolition. Similar to Keith Haring’s Crack is Wack mural in Harlem, Montpellier’s spray artists did not ask for permission and their artworks received worldwide recognition after they were completed.

Along the course of the Verdanson there used to be decorative fountains that provided its water to people and livestock. Some of these fountains disappeared, others were rediscovered, and the one at November 11 1918 Street (named after Armistice Day) overlooks the graffiti-covered channel of today’s Verdanson. To its right atop the stream channel is an icon of street furniture that is as French as the red telephone kiosk is British: the Morris Column. 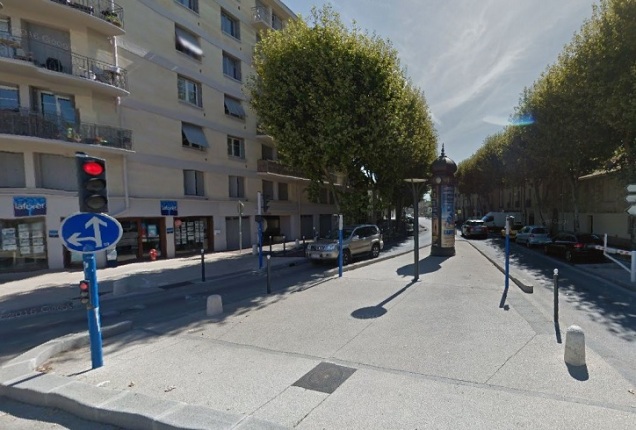 Another Morris Column on the Verdanson can be found at Rue Ferdinand Fabre, where the Quai du Verdanson runs atop the covered stream. Such columns appear throughout France, as well as Germany where it is known as the Litfaßsäulen. Impressionist artist Jean Beraud has a beautiful painting of this column. The only Morris Column in New York can be found at Elizabeth Berger Plaza in downtown Manhattan.

A good view of the neo-Roman Verdanson Fountain can be obtained from the Alphonse Loubat viaduct that carries Avenue François Delmas above a tangle of roads and trolley tracks that cover the stream.  These are the types of puzzles that keep traffic engineers busy. On the far left of this Street View is the Corum convention center-opera-office building, where in 2007 archeologists found the remains of a campsite dating back to 11,500 years. The camp, located on the edge of Verdanson (rue Fontaine-du-Pila-Saint-Gély), revealed stone and bone tools, and  remains of animals and fish.

Beyond the viaduct, the Verdanson reemerges to the surface in a sloping postwar channel that follows Professeur Léon Vallois, Pépinière, and Pradiers Streets to its end. The otherwise boring concrete channel is covered by a coat of splashy paint. 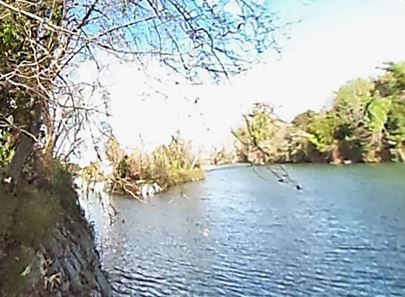 The confluence of the Verdanson and the mightier Lez River can be seen from a shoreline bike path and #4 tram line between the Pompignane and Les Aubes stations. From here, the Lez River carries Verdanson’s trickle for another 13 kilometers towards the Mediterranean Sea at Palavas-les-Flots.

As obscure as this stream appears, it has its own literary devotee, Montpellier historian Roland Jolivet. With this book, his other books, articles, and lectures, he shines a spotlight on this quirky and historic city.

Its name is familiar to Americans as the capital of Vermont is named after it, and a village in northwest Ohio.

Montpellier is not the largest nor most visited French city, but its culture and scenery are as representative of the country as Paris, Marseille and Lyon. The river running through the city and its lively graffiti scene lend a contemporary touch to the historic surroundings.

This article on the Verdanson is my 44th  example of an urban waterway outside of New York City. If you have a hidden stream in mind that you would like to know more about, leave a comment.

One thought on “Verdanson, Montpellier”