September 9, 2017 the Williamsbridge Oval in the Norwood section of the Bronx observed the 80th anniversary since it opened to the public as a park. Prior to that it was a 120 million gallon reservoir built into a bowl-shaped depression on a hilltop.

As seen on this 1937 Parks archives photo of the park under construction, the earthen embankment that ringed this manmade waterway was preserved in the park’s design.

The 1893 G. W. Bromley property map of Norwood shows a grid of what were then paper streets. Mosholu Parkway and Bronx Park were designated but yet developed with Schuil Brook flowing on the parkway’s right-of-way. A railroad spur connected the Harlem Line with the Jerome Park Racetrack, which later became a reservoir. At the center is the Williamsbridge Reservoir, which began storing water from the Croton Aqueduct in 1887.

Site of the Oval

The earliest map of the Williamsbridge Reservoir is the 1873 survey of western Bronx by the Parks Department. The landscape is rural with few roads and structures but a rigid extension of the Manhattan grid has been predetermined for the northwest Bronx, along with Van Cortlandt and Bronx Parks, and Mosholu Parkway Parkway. The 120 million gallon reservoir was completed in 1889, receiving its water from the Kensico Reservoir 15 miles upstream on the Bronx River. 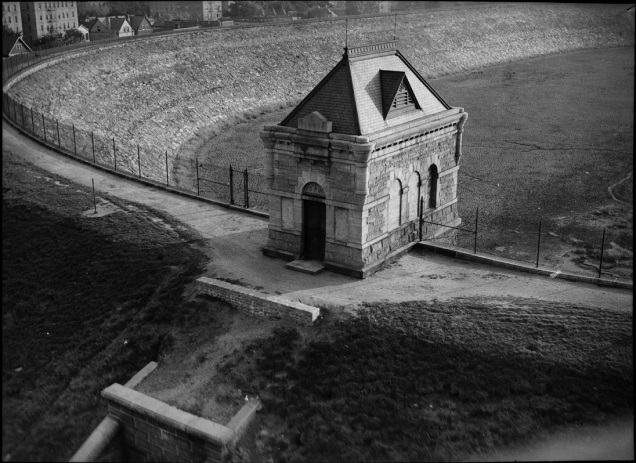 By 1925, the Bronx and Byram aqueduct system was integrated into the city’s Catskill-Croton system and this reservoir was no longer needed. In the above October 1934 image from Parks Archives, the reservoir has been drained ahead of its transformation into a park. Unfortunately the historic east gatehouse was not retained in the design. The gatehouses on Central Parks Reservoir, and the one on w. 135th Street and on W. 119th Street have similar designs hearkening to the Middle Ages.

Initial plans for a 100,000-seat stadium were scrapped following neighborhood opposition. At the time of its construction, the New York Times compared the 75-foot wide embankment to the fortifications of old European cities that re-purposed their unused fortifications as promenades. Tunnel-like entrances were carved into the embankment, further encouraging the European comparison. 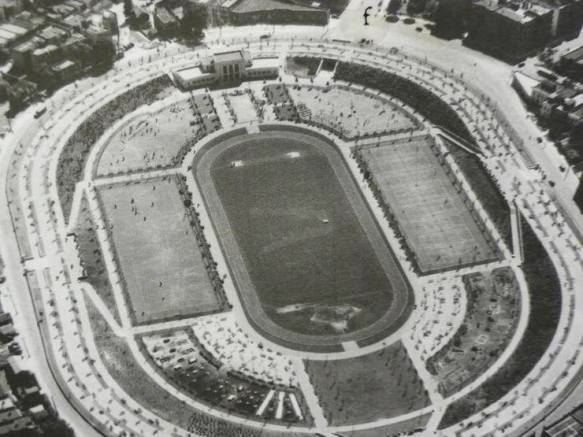 When the Williamsbridge Oval park opened in 1937, it contained a running track, football/baseball fields, a basketball court, 16 hard-surface tennis courts, horseshoe pit, large wading pool, cinder running track, recreation center, and two children’s playgrounds. Since then, the park has added a skateboarding site and a sprinkler fountain with a playground.

Looking at the former reservoir as it appears today, the outline of this historic body of water is easy to see. At the time of its opening it was easy to watch football games from the embankment. The growth of trees partially obstructs the view but I’m happy that this park has trees.

Within the Williambridge Oval is the historic Valentine-Varian House, which is run by the Bronx County Historical Society.

Across the street from the park is the former Reservoir Keeper’s House, built in 1889 in the same style as its gatehouses. It is kept today by the nonprofit Mosholu Preservation Corporation.

In Brooklyn, the former Mount Prospect Reservoir was also transformed into a park in the same decade as Williamsbridge Oval. I have a detailed page on its history.