In the leafy corner of northwestern Bronx is the 140-acre residential enclave of Fieldston. seemingly a village inside the city, its private streets are open to traffic, but no parking is allowed. Its homes resemble a Thomas Kinkade painting, preserved by restrictive covenants and the city’s landmarks law. It also has its private parks, including one with a pond inside it.

This glacial pond is tucked inside a privately-owned park maintained by fees from local residents. History of the Neighborhood

The ponds’ namesake is Major Joseph Delafield, a veteran of the War of 1812 who was a practicing attorney and president of the New York Lyceum of Natural History. The Delafields were a prominent New York family in the 19th century whose members contributed greatly towards the city’s political, scientific and social scenes.

When Delafield established his estate in 1829, the area was part of Westchester County and resembled other Hudson Valley communities with its countryside mansions, river views and sparse population.

In 1909, with the arrival of the subway the Delafields decided to have their estate subdivided for an upscale suburban development. Based on the 1876 survey of the estate by Frederick Law Olmsted and James R. Croes, engineer Albert Wheeler had Fieldston’s streets designed to follow the topographical contours. A more detailed history of Fieldston can be found in the New York Times‘ 2002 real estate section review of the neighborhood and the city’s Fieldston Historic District Designation Report, published in 2006. That year, the neighborhood was designated by the city as a historic district and a Special Natural Area District.

History of the Pond

In the Designation Report, the LPC’s researchers are not sure whether Indian Pond “is either a man-made feature or an altered natural one.” By its appearance, it could be either. On one hand, it lies in a bowl-shaped depression in a knob and kettle terrain shaped by the retreating glaciers. On the other hand, is shore is lined with fieldstones. It also has a concrete bottom and spout emitting water into the pond. The private open space around it is named Delafield Park in honor of the property’s former owners.

A few months ago I applied to work as a spokesman for the Landmarks Preservation Commission, following the departure of its longtime voice Lisi de Bourbon. Certainly my knowledge of history + journalism degree + experience giving tours + writing Parks historical signs could have meant an interview. Not a word from LPC. If I could use the opportunity to determine the origin of Fieldston Pond that is missing in its report, I would start with a few historical maps.

The earliest map with Indian Pond is the 1873 Parks Department survey of the western Bronx, which was annexed by New York City that year. The site of Fieldston is nearly undeveloped. On its western side is Riverdale Avenue, and the green line on its east is Broadway and Van Cortlandt Park. A dirt path across the estate, Delafield Lane, has been highlighted. That lane is today’s West 246th Street and to its north in a curve-shaped valley is a pond. 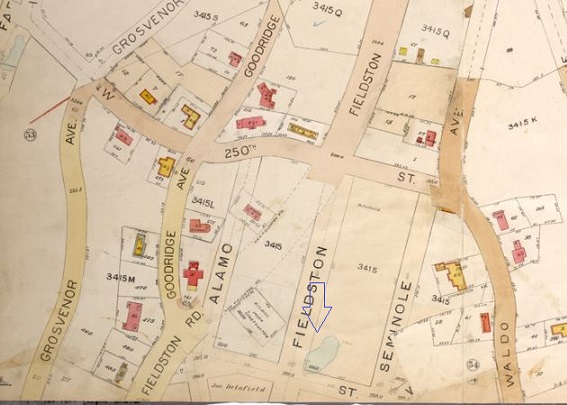 My second piece of evidence is a 1901 Belcher-Hyde atlas plate showing the proposed streets of Fieldston, which at the time was just beginning its transformation from a country estate to an upscale suburb. Most of the roads in the above map were paper streets, never completed. Aside from these two maps, most maps of Fieldston do not show this pond at all. Considering its small size and plans that would have had Livingston Avenue covering the pond. Instead, the Delafield Park and its pond interrupt Livingston Avenue for a block. It is maintained by the Fieldston Property Owners Association.

Development By the Pond

The 140-acre neighborhood is officially landmarked by the city and retains a bucolic character amid creeping urbanization in the rest of greater Riverdale. In 2010, developer Marshall Bloomfield sought to build three homes overlooking the west side of the pond. No ordinary McMansions, their appearance would have been in context with neighboring homes, but in the process fifty trees would have been cut down. Virtually the entire 258-home community spoke out against the plan. Although the 1.3-acre property alongside the pond remains largely vacant, the Bloomfield brothers have submitted a revised proposal for their property, further distancing the homes from the pond. 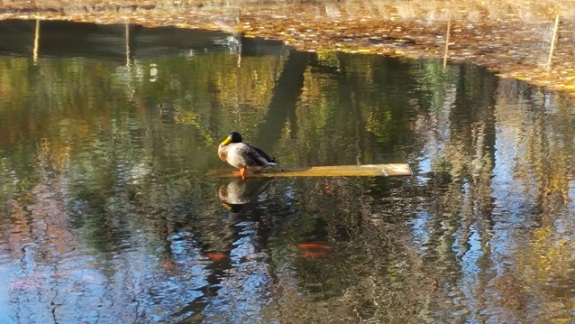 Within the Fieldston Property Owners Association, there is a pond committee that is responsible for the water quality, flora and fauna inside and around the pond. On my visit, I saw goldfish and a duck. The bird was sitting very still, reminiscent of the six decoys placed there in 2011 by local resident Jean Epes. Her intentions were good. She hoped that the decoys would attract more living ducks to the pond. The FPOA however ordered them removed arguing  that “it detracts from the natural nature of the pond to have fake ducks there.”

Fieldston’s Indian Pond should not be confused with Indian Lake in Crotona Park. In this corner of the Bronx, I’ve already reviewed Van Cortlandt Lake, Alder Brook, and the Lourdes Grotto pond. I have not yet visited Delafield Ponds, but their history is documented in my book. Although the former estate at Wave Hill does not have any brooks, it is worth a visit for its dramatic Palisades views and Hudson Valley scenery without leaving the city’s borders.

Gotham Gazette reports on the harnessing of bio-gas from the Newtown Creek Wastewater Treatment Plant in Greenpoint.

DNAinfo reports on the likely impact of the Trump presidency on Gowanus Canal cleanup efforts. Trump’s press office had no comment.

Capital Gazette reports on the restoration of Church Creek in Annapolis.

Forbes Magazine contributor James Conca argues against the removal of dams on the Snake River in Washington, citing cost.

CBC reports on the proposal to daylight Mill Creek in Edmonton, Saskatchewan.