On last Sunday’s bike tour of Flushing Creek, I passed beneath the Long Island Expressway overpass crossing this stream, with the overpass itself in the shadow of Van Wyck Expressway above it. An egret flies above the murky green water of the channelized creek.

There has been a crossing of Flushing Creek at this location since the early 19th century, connecting two of Queens’ earliest towns. The highway overpass above is the most recent successor to an old crossing known as Strong’s Causeway.

Prior to the construction of the Long Island Expressway, this crossing of Flushing Creek was known as Strong’s Causeway. The mystery here was the exact date of the bridge’s construction and who was Strong enough to merit his name on the bridge? According to the book Corona: The Early Years, Strong’s Causeway was first constructed in 1801, making it as old as the Northern Boulevard crossing of Flushing Creek. Maps of the area from the early 19th century show a crossing of the creek between Northern Boulevard and the Head of the Vleigh, but they were not designed to be geographically accurate.

As an example, this 1829 map shows three of Queens’ original towns, Newtown, Flushing, and Jamaica. I highlighted the roads crossing Flushing Creek, with Strong’s Causeway in the middle. This map approximates the locations of towns, roads, and waterways, similar to how today’s subway maps are not designed to scale.

In 1861, the U. S. Coast Guard published a survey of New York’s waterways that appears to have more realistic locations depicted on it. Notice how Corona Avenue zigzags its way east instead of making a straight line towards Strong’s Causeway. It did this to avoid the wetlands of Horse Brook to its south. This ancient road is still heavily used to this day, part of the Q58 bus route that runs from Ridgewood to Flushing.

A few years ago local history enthusiast and music man Mitch Kahn shared with me an old Long Island City Daily Star article that hints to judge Benjamin Woodhull Strong (1781-1847) as the namesake for Strong’s Causeway. A descendant of Puritan colonists, he resided at the 300-acre Spring Hill estate where he raised flowers and fruits, according to the blurb from The History of the Descendants of Elder John Strong, of Nothampton, written in 1871 by Benjamin W. Wright.

Kahn sent me an 1846 farm sale ad from the Morning Courier and New York Enquirer and a 1925 story from the Long Island City Daily Star that clearly connect Judge Strong’s name to the causeway.

Before and After Strong

The first English colonist family to own the Spring Hill estate were the Willets, whose name appears on the Willets Point neighborhood. In 1772, Governor Cadwallader Colden (1688-1776) bought the property and was buried there in September 1776. Like Franklin and Jefferson, he supported the enlightenment and dabbled in science, but regarded the revolution as “chaos and disorder.”

His family had to vacate Spring Hill on account of their loyalist sympathies. Strong owned this farm in the mid-19th century, followed by Harrison Durkee, who used the farm for breeding horses.

In 1893, the estate became Cedar Grove Cemetery. Finally in 1908, most of Cedar Grove was purchased by a Jewish burial society and designated as Mount Hebron Cemetery. The mansion where Strong resided became the cemetery’s office, until it fell in 1930, victim of a fire. Mount Hebron is the resting place of my grandparents and father.

On its western side, Strong’s Causeway began at the junction of Corona Avenue and North Hempstead Plank Road (today’s Colonial Avenue). On the eastern side of Flushing Meadows, it made a sharp turn north towards Flushing. For much of the 19th century, the causeway was an 18-foot wide path laid atop marshland and subject to sinking and flooding. Calls grew from local residents to upgrade this roadway, while at the same time protesting the cost of this project. On February 13, 1896, while local transportation were meeting to discuss repairs on the bridge, it collapsed into the water, along with the hotel next to the bridge, which sank into the mud. With the bridge out of service, the Cedar Grove Cemetery on its eastern side suffered a loss in business and sued the towns of Flushing and Newtown.

The replacement bridge opened on September 2, 1896, a swing bridge that carried the Ridgewood to Flushing trolley line across Flushing Creek. Meyer’s Hotel by the bridge was also rebuilt, hosting a clam bake on the bridge’s reopening. The iron bridge was wider and higher than its predecessor but still subject to flooding at times.

The Ridgewood to Flushing trolley that ran atop Strong’s Causeway operated until July 17, 1949, with the Q58 bus route taking its place.

Horace Harding and the World’s Fair

In 1923, business executive J. Horace Harding (1863-1929) proposed a boulevard going east across the borough stretching from Queens Boulevard towards the city line. Harding approached borough officials with his Nassau Boulevard proposal and was turned down because the city lacked the budget to build the road. Undeterred, he reached out to fellow business leaders and commissioned a land survey for the road. Harding died in 1929 and the boulevard was renamed in his honor.

In that year, the city was considering the acquisition of the ash dump at Flushing Meadows for a future park. The 1934 selection of the site for a World’s Fair meant that Strong’s Causeway would receive another upgrade to accommodate fair goers. 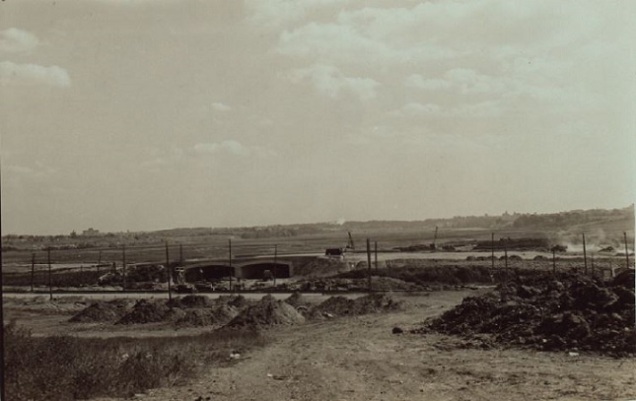 Prolific city photographer Percy Loomis Sperr visited Flushing Meadows in October 1935, capturing the old Strong’s Causeway in the foreground and Horace Harding Boulevard in the background. The ash dump and salt marsh were being transformed into parkland for the World’s Fair. The double arch bridge spanned across Grand Central Parkway, which was extended west from the Kew Gardens Interchange to Triborough Bridge. On September 18, 1937, Horace Harding Boulevard opened to the public.

The new roadway and fairground obliterated all traces of Strong’s Causeway, along with the original winding course of Flushing Creek, which was rerouted to a channel on the park’s eastern edge.

Through the blog and Facebook group LI & NY Places No More, historian Todd Berkun shares old photos and maps, comparing what was there before and how it appears today. Combining old maps with a contemporary aerial survey of Flushing Meadows, Berkun pinpoints Strong’s Causeway just a few feet west of the Meadow Lake Bridge that connects the lakeside section of the park with the park’s central core. 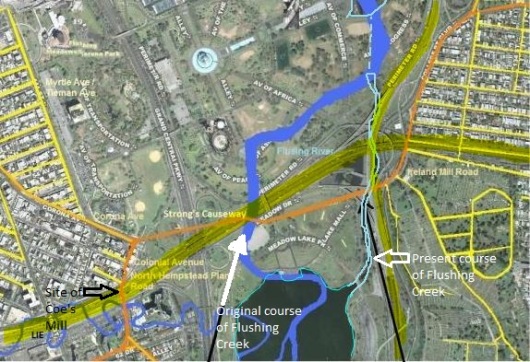 With the original crossing completely gone, I like to think of the present-day Long Island Expressway overpass across Flushing Creek as a successor to Strong’s Causeway.

In 1954, the former causeway was renamed for the final time as Long Island Expressway, a 71-mile route that runs for nearly the entire length of Long Island from Midtown Manhattan to Riverhead.

It is an interstate (I-495) in name only; its extension across the Long Island Sound to Rhode Island and across Manhattan into New Jersey were never completed, nor was its connection to I-95, its parent route. As a result of its unrealized leg in Manhattan, the highway’s first exit is number 13, at Borden Avenue in Long Island City.

In the photo on the left, I-495 is highlighted, crossing Flushing Meadows and its creek along the same route as Strong’s Causeway.

In 1961, the Van Wyck Expressway was extended north from the Kew Gardens Interchange to the Whitestone Bridge, running on a viaduct above I-495 and Flushing Creek. It has the designation I-678, but its parent route I-78 was never extended into New York City, to connect with I-678. The I-78 terminates at the Manhattan portal of the Holland Tunnel.

In a recent interview, I lamented that Flushing Creek does not have a grassroots support group similar to the ones for Gowanus Canal, Newtown Creek and Bronx River. On the bike tour this past Sunday, I learned that it does have an advocacy group: Guardians of Flushing Bay, which also speaks for Flushing Creek. You can follow them on Facebook for upcoming events.

Other places that cross Flushing Creek:

Bozeman Daily Chronicle reports on a group of local high school alumni seeking to restore Mandeville Creek, which runs through the property of their alma mater in Montana.

KTVA Alaska reports that funding has been secured for the restoration of Campbell Creek in Anchorage.

CBC News reports on the restoration of Filsinger Park and its creek in Kitchener, Ontario.