Among the trusted sources that I’ve found in the course of research for my book is Brooklyn historian Joseph Ditta, whose Gravesend Gazette blog offers details on the history of southern Brooklyn. From his collection, here’s this week’s selected photo.

The colonial saltbox structure is Gerritsen’s Mill on Gerritsen’s Creek in present-day Marine Park. At the time of its destruction on September 4, 1935, it was believed to be the oldest tidal mill the country.

Nothing remains of the mill today and Gerritsen’s Creek has been reduced to an inlet of Jamaica Bay with its head at Avenue U. Prior to development, the stream reach further inland and served as an important trading route for local Natives. It was known to the Canarsee Indians as Weywitsprittner, who valued it for its diversity of wildlife that provided food and seashells for wampum currency. The Dutch called this stream Strome Kill.

According to the 1891 Julius Bien atlas, the stream had its origins at the present-day intersection of Kings Highway and Bedford Avenue, on the boundary line separating the towns of Flatlands and Gravesend. A couple of blocks further inland, the grid-defying Bay Avenue and Olean Street indicate the boundary. Both towns were absorbed by the City of Brooklyn in 1894, which itself was absorbed into New York City in 1898. Circled on the map above is the milldam built by settler Hugh Gerritsen soon after he acquired the property in 1645. From that point, Strome Kill was also known by the name of its mill owner.

In his childhood, historian Thomas J. Campanella explored the marshes around this creek as land around it was quickly being developed for apartments.

Another notable feature on the map is Gravesend Neck Road, which connected the mill to the nearest town. This  ancient road has since been truncated, terminating at Avenue U and Nostrand Avenue. The mill served the residents of Gravesend until 1899 and a decade later it was purchased by William C. Whitney. 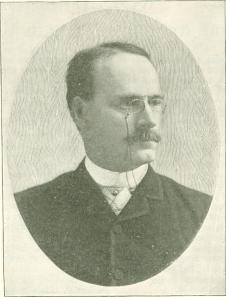 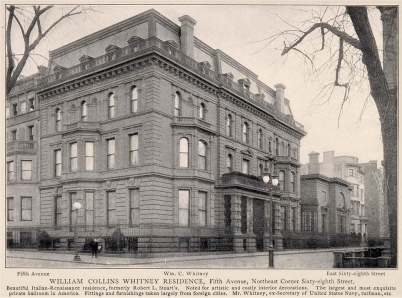 If the name appears familiar, that’s because the first Whitney arrived in America in 1635 with the Puritans. His descendants figure prominently in every major event in American history, and William lived an accomplished life as an attorney, businessman, racing horse owner, political reformist, and Secretary of the Navy under President Grover Cleveland. His main home in New York was a mansion on Fifth Avenue and 68th Street. In a spirit similar to his contemporary Theodore Roosevelt (also a political reformer), Whitney acquired large tracts of land that later became public parks.

One such example is the William C. Whitney New York State Forest Preserve within Adirondack Park.

His purchase of Gerritsen’s Mill ensured its future inclusion within Marine Park. Whitney and his son Harry Payne Whitney used the property as a summer home and place to train racing horses. In 1925, the property was acquired by the city for Marine Park and calls were made by local historians to restore the structure as a museum.

An optimistic Brooklyn Daily Eagle article from August 26, 1934 described how civic groups took on reluctant city officials in the struggle to restore the mill. Unfortunately, it takes one small lit match to destroy nearly three centuries of history, which is exactly what happened in 1935. Joseph Ditta picks up the story.

Since then, the section of the creek north of Avenue U was buried in favor of a running oval and what remained of the milldam was swept away by the tides. The discarded millstone is believed to lie somewhere in the marshes, either within Marine Park or downstream at Dead Horse Bay. Around the head of Gerritsen Inlet, there is a nature trail where a sign points to wooden pilings sticking out of the inlet. 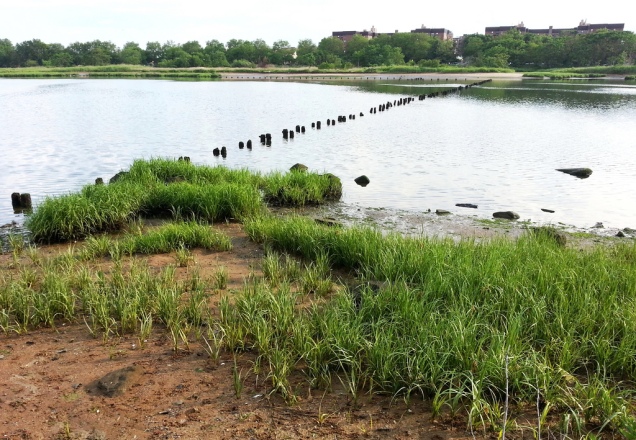 Matt Green of the blog I’m Just Walkin’ identified the pilings, though one reader suggests they could be a remnant of a bulkhead constructed in the 1930s.

Gerritsen’s Mill is gone, but less than a mile away is the Hendrick I. Lott House, a historical landmark open to the public where visitors can get a feel for colonial period Marine Park. Within the park, the Salt Marsh Nature Center opened in 2000 at the head of the inlet, offering lessons on the natural history of Gerritsen Inlet.

Another recent addition to Marine Park that hints at its past with a tasteful architectural design is the Carmine Carro Community Center, also a round structure that features environmentally sustainable items such as a green roof, solar panels, geothermal heating and cooling, and skylights.

There’s too much plastic trash floating in the city’s waterways, NY/NJ Baykeeper reports. The city is constructing barriers in Newtown Creek to capture some of the trash.

One month to go before my book launch celebration. Reserve your attendance through the Greater Astoria Historical Society.

7 thoughts on “Photo of the Week”